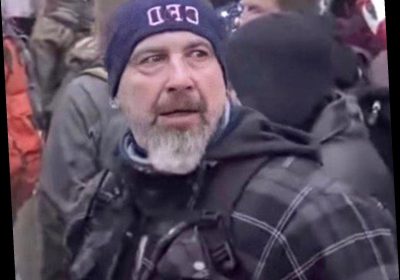 A man wanted by the FBI for allegedly throwing a fire extinguisher that hit three Capitol police officers in last week's deadly Washington, D.C., riot has been charged in federal court.

After the incident, the FBI released photos of the then-unidentified Sanford, saying he was wanted for questioning.

Senator Bill Cassidy, a Republican from Louisiana, initially posted the photos of Sanford on his Twitter feed, saying the man was wanted for questioning in connection with the death of Capitol Police Officer Brian Sicknick. But he later amended that claim, tweeting, "Capitol Police has informed me the individual in my previous tweet is a person of interest, but for a separate incident that occurred at the Capitol on Jan 6th. Deleted tweet to prevent further confusion."

The photos show Sanford in a navy hat with "CFD" on it.

Sanford made his initial appearance in a federal court in Pennsylvania on Thursday afternoon, the Morning Call reports. He was denied release and will now stay in custody of the U.S. Marshals until he is moved to D.C.

Sanford claims he doesn't own a Proud Boys t-shirt, his attorney Enrique Latoison noted after Thursday's hearing. "He's not involved in any white supremacist organization whatsoever and he doesn't know what they're talking about," Latoison said, the Morning Call reports, though Latoison admitted his client had taken a free bus trip to the pro-Trump rally in D.C. on January 6.

The former firefighter is one of at least 36 people now facing federal charges in connection with last week's violent insurrection.

PEOPLE was unable to reach Sanford's attorney for comment.