Roseanne Barr says Planet of the Apes was about Jewish persecution Roseanne Barr said the plight of the Jewish people is depicted in the Planet of the Apes films in a series of tweets on Wednesday night and Thursday morning.

The disgraced actress returned to social media where she was once again defending her racist remark about Valerie Jarrett when she wrote: ‘Rod Serling wrote Planet of The Apes. It was about anti-semitism. That is what my tweet referred to-the anti semitism of the Iran deal. Low IQ ppl can think whatever they want.’

Barr then tweeted a number of blog posts backing her theory, and at one point thanked Rosie O’Donnell and Norm MacDonald for supporting her over the past few weeks.

Then, shortly after waking up on Thursday, she wrote about growing up alongside Holocaust survivors. 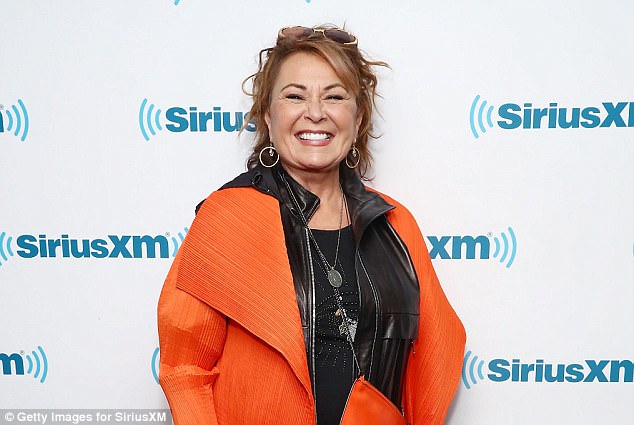 Tweet, tweet, tweet: Roseanne Barr (above in March) said antisemitism and the plight of Jewish people were central themes in the Planet of the Apes films

Comment: ‘That is what my tweet referred to-the anti semitism of the Iran deal. Low IQ ppl can think whatever they want,’ said Barr, claiming again she is not racist (above) 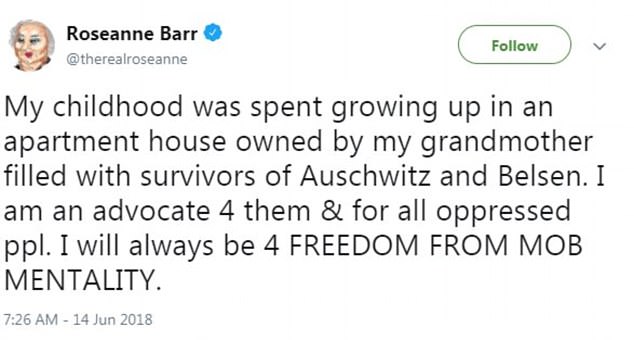 Early life: The actress also said that she grew up surrounded by Holocaust survivors in a building owned by her grandmother (above)

‘My childhood was spent growing up in an apartment house owned by my grandmother filled with survivors of Auschwitz and Belsen. I am an advocate 4 them & for all oppressed ppl. I will always be 4 FREEDOM FROM MOB MENTALITY,’ wrote Roseanne.

The previous night she had responded to a tweet about her Planet of the Apes interpretation by stating: ‘i dreamed about my childhood, growing up with survivors of nazi camps-.’

Barr went on to say she was spending the day making picture frames with her mother and singing Amy Winehouse before denying claims that she is racist yet again, calling her attack on Jarrett ‘political’ and not racially motivated.

In a series of tweets on Wednesday night,. Barr claimed her comments had been ‘misunderstood’ while also saying she had quit taking Ambien sleeping pills.

She wrote: ‘I want u all2 know I’m fine. I’ve been using this time2 reflect & 2 gain insight on what I said & how it was misunderstood.. Needless2 say I’m NOT what people have accused me of! I’ve never practiced ‘RACISM’ in my entire life & never will.’

Barr then revealed her 2012 presidential campaign manager Thomas Muhammad is to be allowed to speak for her because, ‘he knows the work I have done in civil rights against racism ALL MY LIFE & understands my tweet was about Iran’s regime, not race’.

She also tweeted about planting trees and expressed her emotions about her recent controversy.

‘Guys, I have been planting trees digging in the earth singing and feeling a great deal of relief.

‘I will begin to speak for myself in media soon. My mind went into deep shock and my body too. I see clearly now.’

She praised West’s new LP, tiled Ye in another tweet, that has since been deleted.

‘MUCH LOVE 2 U all-thanks for helping and praying for me! It worked! Listen to @kanyewest new album about mental illness, it’s the greatest thing ever.’

Roseanne said she had been planting trees, singing and ‘feeling a great deal of relief’

In a since-deleted Twitter rant, Barr said she told network executives that she wanted to ‘make amends’.

‘I begged Ben Sherwood at ABC 2 let me apologize & make amends. I begged them not to cancel the show. I told them I was willing to do anything & asked 4 help in making things right. I’d worked doing publicity 4 them 4 free for weeks, traveling, thru bronchitis. I begged 4 ppls jobs,’ she tweeted.

‘He said: what were you thinking when you did this? I said: I thought she was white, she looks like my family! He scoffed & said: ‘what u have done is egregious, and unforgivable.’ I begged 4 my crews jobs. Will I ever recover from this pain? omg.’

‘I also told Ben Sherman that I would go in hospital to check my meds, bc the stress had made them less effective. I begged like 40 motherf—–s. Done now,’ Barr added.

Minutes later, she tweeted: ‘Get this! they pulled all my reruns and replaced me with COSBY! it’s kinda hilariously gross.’

That was not and is not true.

Barr also said that she was ashamed that her child co-star Jayden Rey might think she didn’t love her because she is African American.

‘The saddest part of all is 4 Jayden Rey on the show whom I grew 2 love so much & am so ashamed of myself that she would ever think I do not love her bc she is African American. It’s the most gawd awful painful thing. I can’t let myself cave in tho,’ she tweeted.

Tiffany Haddish commented on the decision made by ABC to cancel Roseanne Barr’s show after her racist tweet in an interview with The Hollywood Reporter.

The comedian, who is known for her frankness and honesty, did not mince words either as she detailed two encounters she had with Barr and then scoffed at the notion that this behavior was a surprise.

‘She been racist,’ declared Haddish, who then added: ‘Why’d you all give her a TV show?’

She ready: Tiffany Haddish (left) said she twice ran into Roseanne Barr (right) around 2000, 2001 when she was visiting a friend who lived in El Segundo, California 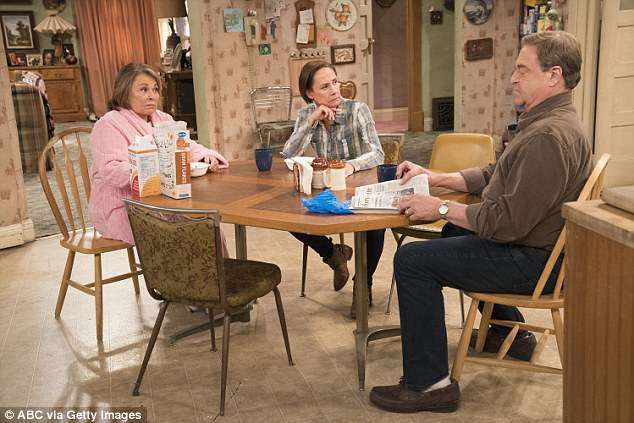 She racist: ‘I say, “Hiiii, Roseanne.” She looks at me ( gives a disgusted face), and ran in the house. I thought, “Maybe she don’t want to be bothered today,’ said Haddish (Barr with Laurie Metcalf and John Goodman on the Roseanne set)

Barr’s co-star and the show’s executive producer Sara Gilbert denounced her on social media in the wake of her remarks.

‘Roseanne’s recent comments about Valerie Jarrett, and so much more, are abhorrent and do not reflect the beliefs of our cast and crew or anyone associated with our show. I am disappointed in her actions to say the least,’ wrote Gilbert.

‘This is incredibly sad and difficult for all of us, as we’ve created a show that we believe in, are proud of, and that audiences love— one that is separate and apart from the opinions and words of one cast member.’

‘Wow! unreal,’ wrote Barr, who had confessed in earlier interviews to the difficult job Gilbert had of trying to rein in her impulse to tweet offensive comments.

However, she later followed up, tweeting: ‘No, I understand her position and why she said what she said. i forgive her. It just shocked me a bit, but I indeed f***ed up.’

She reiterated this soon after when a follower criticized Gilbert, saying: ‘She’s distancing herself from me and my tweet-she has to.’

Gilbert’s on-screen brother did not get off so easy.

Michael Fishman, who played D.J. Conner on the show and started working with Barr when he was just six, was the first to feel the wrath of the show’s creator after he released a statement criticizing her racist tweet saying Jarrett looks like the lovechild of the ‘Muslim Brotherhood and Planet of the Apes’.

‘I condemn these statements vehemently,’ wrote Fishman, who is the father of a black daughter in the reboot.

‘They are reprehensible and intolerable, contradicting my beliefs and outlook on life and society. I have always lived and taught my children to be inclusive. I believe our show strived to embrace different backgrounds and opinions, through open dialogue.’

Barr was none too happy with that statement and fired back on Twitter: ‘I created the platform for that inclusivity and you know it. ME. You throw me under the bus. nice!’

Fishman responded, stating: ‘You fought, built, and designed Roseanne for inclusiveness. That is why yesterday was so out of character with the last 30 years. It was in your hands from the beginning to the end. No one can deny that.’

Barr fired back: ‘Please leave me alone, thanks.’

Barr seemed to have made amends with both Gilbert and Fishman after a few days however, writing:  ‘To michael fishman and sara gilbert: I forgive u both, love u both, just wish u could have called me personally 2 talk rather than do it in a public arena. I understand, tho. It’s ok.’