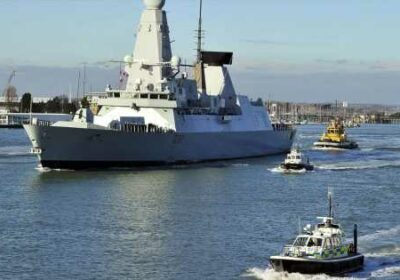 A warship in the Royal Navy’s flagship £1billion fleet has spent the last four years stuck in port.

HMS Daring has not put to sea since June 2017 after being hit by a string of technical issues.

And similar problems with the five other Type 45 destroyers in the fleet have led to them also spending much of their time tied up in harbour.

The ships have been dogged by a string of hitches, which include refits overrunning, delays sourcing vital spare parts, ­engines conking out and even a lack of trained sailors to man them.

It means instead of spearheading the nation’s naval power around the globe, the 8,000-ton vessels have been stranded in port. In 2021 three of them spent the ­entire year tied up in dock because of technical problems or a lack of crew.

Many of the problems have been blamed on the ships’ high-tech power systems, which can overheat.

Pete Sandeman, director of the Navy Lookout publication, said: “A decision was made by government in 2000 to take a risk with an innovative gas ­turbine design that did not pay off.

“As a consequence, the Type 45 ­destroyers have been plagued by ­significant propulsion problems since they entered service.”

As a result, on an average day just two of them were on active service at any one time.

But Mr Sandeman said: “Despite far too much time spent alongside, these destroyers have still managed to serve around the word and are regarded as world-class air defence platforms.”

A Navy spokesman said: “The Royal Navy continues to meet all of its ­operational requirements, with ships held at different levels of readiness to meet our commitments worldwide.”