Russian goalkeeper, 16, who was struck by lightning while training is BACK on the pitch less than three weeks later – and has signed his first pro contract

A miracle goalkeeper has signed a new contract and is ready to play again just two-and-a-half weeks after he was struck by lightning on a football pitch.

The moment Russian Ivan Zaborovsky, 16, was struck was captured in a dramatic video taken in Orekhovo-Zuevo, near Moscow.

He was seen to be hit in the chest by a thunderbolt as he kicked the ball while taking part in a training session with his football team. 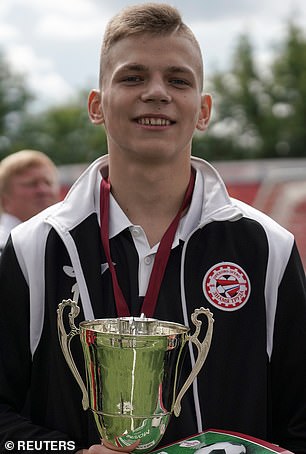 Ivan Zaborovsky, 16, was stuck by lightning but miraculously survived, and has now signed a professional contract with his football team

There was a flash of light and a split second later, black smoke was seen rising from burning the pitch, and Zaborovsky was left lying face down on the pitch.

Today it was revealed he did not breathe for two minutes.

But he was given heart massage and mouth-to-mouth resuscitation by his coaches and miraculously survived.

The player was left in a coma for three days but is now back with his teammates and showed off the scar on his chest from the lightning strike as he signed his first professional contract with local club FC Znamya Truda, in Russia’s third tier.

‘I’m feeling perfectly well now. Nothing is hurting,’ he said.

‘I don’t remember anything starting from the moment I left home to go training,’ he said. ‘I came to my senses in hospital.’

Speaking in a video talking about the freak accident, Ivan said how his hero and role model is Manchester United’s goalkeeper David De Gea, who he dreams of meeting. 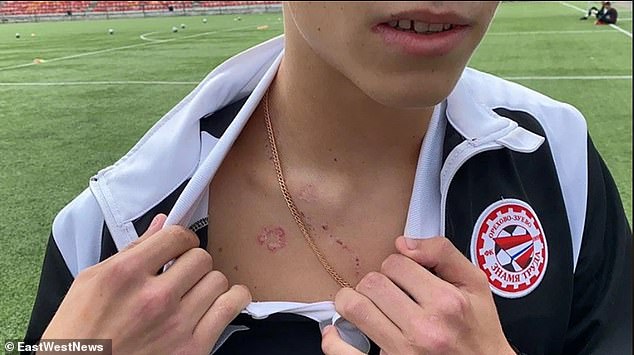 Zaborovsky has been left with a scar where his chain – which he was wearing at the time of the lighting strike – burnt his skin. Above, Zaborovsky shows off his scar 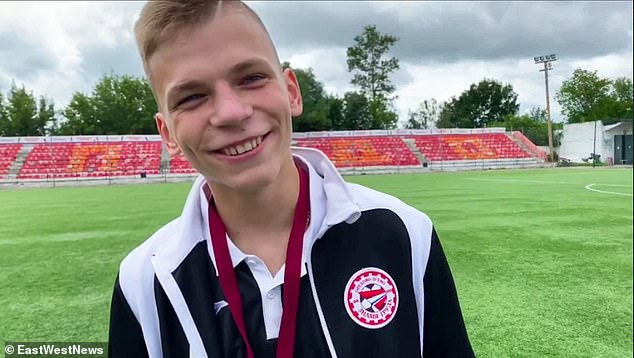 It is claimed the sky was clear when the lightning struck the 16-year-old.

Coach Basov said: ‘I immediately thought it was lightning. When I ran up to him, I turned him over and his entire shirt on his chest had burned out.’

The player was not breathing for almost two minutes.

‘After we provided therapy, he began to breathe, and I felt his heart beating, his pulse reappeared.’

A day later his worried girlfriend Yelena said: ‘He is in a stable condition. He regained consciousness but due to a strong painful shock he had to be put back into a coma.’

‘His parents are at his bedside. He has a scar around his neck where the lightning hit his chain, and that his lung was damaged. He needs time to stabilise,’ she said, adding ‘Doctors say that he was born under a lucky star. I still can’t comprehend it all. I cannot understand how it could happen.

Previously it was thought he had kicked the ball in the goal as he was struck by lightning, but a new version of the moment shows the ball went wide of the net.