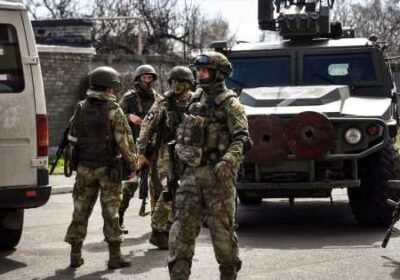 Russian marines in Ukraine have penned a letter begging for Vladimir Putin to reconsider his invasion strategy, with "blood pouring and pouring".

The most recent estimates from the Ukrainian Army put the amount of Russian soldiers killed since Putin launched his "special military operation" in February at just over 75,000.

They have reportedly written to Oleg Kozhemiako, the governor of the Primorsky Krai region in Russia's far east, asking him to act on their behalf and get Putin to change tack.

Sladkov refused to share the intricate details of the letter but did shed some light on the grim picture painted by the marines.

His post was titled: "URGENTLY!!! DIFFICULT SITUATION IN PAVLIVKA (DPR). MARINES OF OUR 155th Brigade APPEALED TO THE GOVERNOR OF PRIMORYE OLEG KOZHEMIAKO."

It read: "I won't post the letter here. Its essence was transferred to the Russian Ministry of Defense. The original is in Primorye.

"It has been said: great losses, the inability to convey to the top management information about our high useless losses in people and vehicles.

"I have the numbers, but then it's up to the Prosecutor General's Office [to release them].

"The marines are asking Oleg Kozhemyako to contact the Ministry of Defence to send a commission to urgently analyse the situation.

"There are three high-profile names in the letter, I know them but I don’t quote.

"However, I am publishing this post, because they have been talking to higher-ups about the situation in PavlIvka for several days, and the blood is pouring and pouring."