San Francisco police will stop releasing the mug shots of people who have been arrested unless they pose a threat to the public, as part of an effort to stop perpetuating racial stereotypes, the city’s police chief announced Wednesday.

Bill Scott, chief of San Francisco police, said the policy – which goes into effect immediately – means the department will no longer release booking photos of suspects to the media or allow officers to post them online.

Booking photos are taken when someone is arrested.

They are often made public whether or not the person is prosecuted for the alleged crime, which undermines the presumption of innocence and helps perpetuate stereotypes. 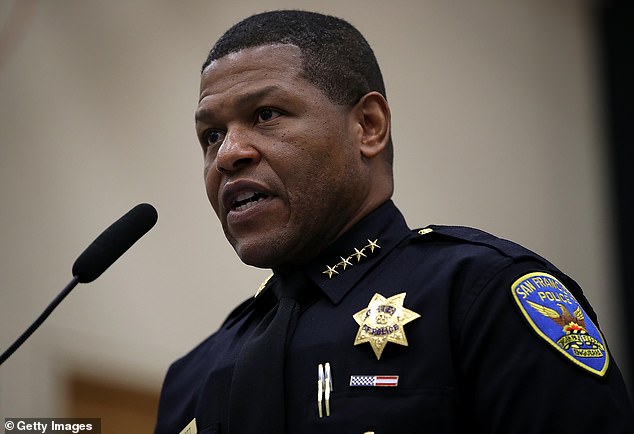 Jack Glaser, a public policy professor at the University of California Berkeley who researches racial stereotyping and whose work Scott consulted, said data shows black people who are arrested are more likely to have their cases dismissed by prosecutors.

‘That may be just part and parcel of the same issue that police will stop and search blacks at a lower threshold of suspicion in the first place and so, their arrests are more likely to be unsubstantiated,’ Glaser said.

The Pinkerton National Detective Agency said it created the mug shot concept back in the 1850s when the pictures were attached to wanted posters.

As recently as a decade ago, suspects would be snapped holding a tablet with the date of their arrest and an assigned booking number.

Many law enforcement agencies have scrapped that format thanks to digital cameras that can be linked to computer databases.

Police departments are free to make their own decisions regarding releasing mugshots.

Some, such as New York City and Los Angeles, have decided not to release mugshots. It means that celebrities in Hollywood are far better getting arrested within the city limits, rather than in less-friendly jurisdictions.

Other police departments, such as Miami and Chicago believe it is a valuable crime deterrent and serves the public interest.  Police officers often say their aim is transparency, not public shaming. But critics point out that the damage can be lasting.

‘We have undoubtedly noticed a trend toward putting more and more pre-arraignment arrest and mug shot records online, and that’s a troubling trend,’ said Lee Rowland, a staff lawyer with the American Civil Liberties Union.

Police Facebook pages can draw attention to people who may never be convicted and whose arrests might otherwise have avoided as much public notice, she added.

But the mug shots live on.

Numerous websites post photos of mug shots online, regardless of whether anyone was convicted of a crime, and then charge a fee to those who want their photo taken down.

The phenomenon prompted California’s attorney general to charge one of the biggest operators with extortion, money laundering, and identity theft.

That contributes to Americans making an unfair association between people of color and crime, Scott said.

‘This is just one small step but we hope this will be something that others might consider doing as well,’ he said.

For example, the New York Police Department, the nation’s largest, releases information on arrests but does not put out mug shots unless investigators believe that will prompt more witnesses to come forward or aid in finding a suspect.

Georgia and New York stopped releasing booking photos in an effort to curtail websites that charge people to remove their picture and booking information.

San Francisco is adopting the policy as part of an effort to stop spreading negative stereotypes of minorities, something Scott, who is black, said he has experienced when not in uniform.

‘You walk into a department store and you get followed around and the security is looking at you suspiciously, I’ve experienced that,’ Scott said.

He said limiting the release of mug shots of people who have not been proven guilty of a crime will remove a key contributor to the perception the public has about race and crime that is often bolstered when the booking photos are published in the news media.

In San Francisco, the only exceptions will be if a crime suspect poses a threat or if officers need help locating a suspect or an at-risk person, Scott said.

Under the policy, the release of photos or information on a person who is arrested will also require approval from the police department’s public relations team.