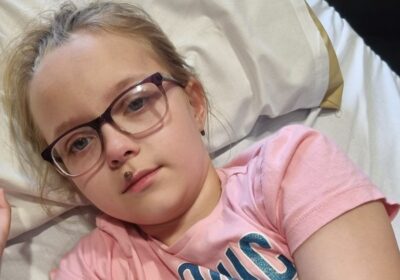 A sleeping schoolgirl had a terrifying encounter with a false widow spider when the UK's most venomous arachnid bit her on the lip.

Rachel Wilson said that she feared her daughter Phoebe-Lee Matthews would be "paralysed" after she couldn't move her legs when she woke up in a panic.

The 35-year-old took the youngster to a GP five days after the bite, when the strange black dot on her lip got bigger and darker.

Only when it popped and started to ooze 'white gunk' did Rachel consider that the mark may not be a wart or impetigo. The pair thought the worst was over when the mark scabbed over, but when Rachel woke Phoebe up the next morning her temperature skyrocketed and she collapsed.

Phoebe was rushed to hospital and doctors gave her antibiotics to tackle the infection, and she was discharged the next day.

The carer said that two days after the mark mysteriously appeared on Phoebe's face, she spotted an 'unusual-looking' spider on the landing, which she believes was a false widow that bit her. Six weeks on from her ordeal, Phoebe is fully healed but has been left with a 'hole' in her face and panics each night when she's put to bed.

Rachel, of Barry, Vale of Glamorgan, Wales, said: "It was absolute hell. It's taken a good four weeks for her to get over this.

"I thought 'jeez, something's not right here' [when she saw the bite]."

After taking Phoebe to her GP she was given a cream to tackle what they suspected was a wart or impetigo, but nothing improved they went back two days later. Rachel said she demanded more attention from the doctors.

"On Wednesday morning I went back to the doctors again and said 'listen, I'm still not happy. It's getting bigger, something's not right'," she said.

On Saturday morning, the spot had popped and was "oozing out gunk" so Phoebe's lip swelling had slightly reduced.

She revealed that her child told her in a panic that her legs were "broke". "I tried to get her to come downstairs and she said 'I would Mummy but I can't move my legs, they're broken'.

"I went to stand her up then and she just collapsed. I was panicking. I thought she had sepsis from it and was worried she was paralysed."

The child spent some time in Princess of Wales Hospital in Bridgend and now she's on the he mend.

Rachel said: "She's back to her normal self now but it has scarred her. She's panicking every night when I put her to bed."