An affluent seaside town has complained rogue ice cream sellers are ‘taking downright liberties’ by setting up along their genteel seafront.

Frinton-on-Sea in Tendring, Essex, which only opened its first pub 20 years ago, has banned ice cream sellers and other traders from its promenade.

Irate councillors claim an influx of staycationers caused by Covid-19 travel restrictions is wreaking havoc on their sleepy seaside town, with bad parking and even worse behaviour.

Councillors have now warned the police will get involved to move along any traders setting up for the summer trade.

Ice cream sellers are said to be causing controversy by selling treats without a licence in the protected Greensward area by the beach, where no arcades or amusement parks are allowed. 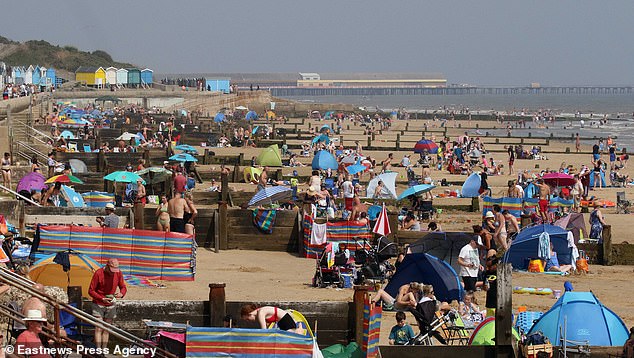 The packed beach at Frinton-on-Sea today. The Essex town, which only opened its first pub 20 years ago, has banned ice cream sellers and other traders from its promenade

Frinton councillors have now urged people who want the ‘razzmatazz ‘and a raucous day at the beach to visit neighbouring resorts like Clacton or Walton.

In a defiant message to ice cream sellers, Frinton councillor Terry Allen said: ‘If they come here next weekend beware because now everyone is on guard for it and they will be sought after, the police will be down here, the council will be down here.

‘The residents took it once or twice but now they have taken the kindness and tolerance of the people of this town as a weakness, and they are taking downright liberties here.

‘You can only take so much and the people have said, that’s enough.

‘I know we are in this difficult time and everyone is having staycations, but what will happen is by the time next year comes there will be more restrictions here.

‘That’s what you get when people don’t follow the rules.’

He added: ‘Normally people who trade here, the shorefront control and the police would be on it straight away. But because of the vast numbers and police are busy, people can try their arm and get away with it.

‘But it’s come to a point now where it wasn’t the odd one it’s loads of them coming and that’s what has caused the biggest problem, once someone sees it’s like a rush with everyone and their uncle wanting to do it.’

He claims there have been cases where people have been taken to court and given suspended sentences with the threat of a custodial sentence for illegally trading by the sea.

He added: ‘They are here for the quick kill and we are not prepared, as a council, to take it.

‘It’s against the law and if people want to trade they get a shop in the high street, this is not a market town and it’s not open for everything, it’s a town by the sea.

‘This town is not a seaside resort, it’s a town that welcomes visitors who come here and treat it like the locals do and become part of that environment, not hostile to it.

‘If you want to bring the family here to enjoy the sun, sea and sand, fine. If you want the razzmatazz go to Clacton or Walton because those places are geared up to that and that’s what they do.’

But some people have slammed the anti ice cream stance, with Robert Maughan posting on Facebook: ‘What about all the children that live there, are they not allowed ice cream?’