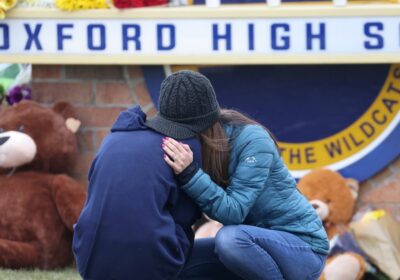 A bungling security officer at a school shooting thought it was just a drill, and that a victim bleeding to death was wearing "really good makeup", it has been alleged.

Retired law enforcement official Kimberly Potts was employed as an armed guard at Oxford High School, Michigan, US at the time of a mass shooting in November last year that claimed the lives of four students.

Allegations against Potts were revealed by Ven Johnson, the victims' families' lawyer, at a press conference on Wednesday (August 3).

Johnson explained that they did not know about Potts' alleged involvement until he reviewed surveillance footage of the shooting at the prosecutor's office.

The families now want the security officer included as a defendant on their civil lawsuit.

According to a court filing, video shows Potts opening the door to a bathroom where two students and the suspected shooter were. She allegedly did not enter, instead closing the door and walking away.

One of those students, Justin Shilling, 17, was later killed by suspect Ethan Crumbley, 15.

The filing states that Potts "informed the investigators that she did not see anything or hear anything which is why she decided not to enter the bathroom".

"Ms. Potts clearly had an opportunity to intervene and prevent Justin’s death," it says.

Craig Shilling, Justin's dad, said yesterday (Wednesday, August 3): "I kind of feel like this is kind of like a poorly written movie or some kind of candid TV show. And I'm looking for cameras, but I don't find them."

The filing adds that Potts was seen "casually walking" during the shooting, and that she told investigators she assumed it was a lockdown training exercise to prepare students for an active shooter.

Later, Potts is said to have come across Tate Myre, 16, as he was "bleeding to death". She told investigators she thought he had "really good makeup" on and that it was part of the drill.

Potts is no longer employed by Oxford Community Schools.

The school district is facing multiple lawsuits from the victim's families, including this one which names Crumbley and his parents, several school employees and Oxford Community Schools as defendants.

Crumbley has been charged as an adult for 24 crimes including murder and terrorism. In January it was announced he plans to plead insanity.

His parents James and Jennifer Crumbley, who bought him the gun he allegedly used, face involuntary manslaughter charges.