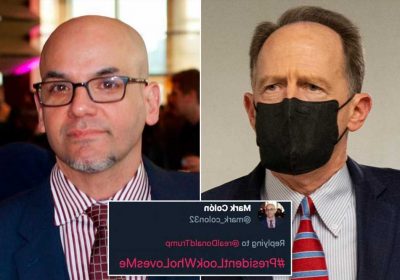 In a letter sent to Dorsey on Thursday, Toomey (R-PA) argued that past tweets made by HUD assistant secretary for Community Planning and Development nominee Mark Colón, who currently serves as president of the Office of Housing Preservation at NY State Homes & Community Renewal (HCR), and HUD assistant secretary for Policy Development and Research nominee Solomon Greene could provide vital information needed for the panel to fully assesses whether the individuals are fit to serve in the positions.

The Pennsylvania Republican said the posts — which include Colón referring to GOP senators as “clowns” and referring to former President Trump as a “P[***]y A[**] B[***]h” — raises concerns about the nominees’ character and feels the committee needs access to all past content to fully evaluate their qualifications.

“As the Ranking Member of the Senate Committee on Banking, Housing, and Urban Affairs (Committee) —the Senate Committee responsible for vetting HUD nominees — I am concerned by tweets, including deleted tweets, made by these nominees. The content of these tweets raise serious concerns about Mr. Colón’s and Mr. Greene’s policy views, as well as their character, temperament, and fitness for office.” he wrote, noting his staff was able to access some, but not all of the deleted content using the Internet Archive’s Wayback Machine.

“Because these recent, formerly public statements by Mr. Colón and Mr. Greene are likely to shed light on how they would carry out their duties at HUD, it is critical that  Senators on the Committee quickly receive this deleted information from Twitter to allow us to fully evaluate these nominations to senior leadership positions in the federal government.”

Toomey said that Colón’s frequent use of the social media platform to disparage Republican public figures and their viewpoints “while serving as a public housing official in New York to routinely mock and attack others with whom he disagrees, propagate baseless conspiracy theories, and exhibit other divisive and unprofessional behavior” could potentially be disqualifying for him to serve in the role.

He went on to cite multiple examples of inflammatory comments which ranged from alleging a female Fox News anchors’ face doesn’t move to referring to Senate Minority Leader Mitch McConnell as “Moscow Mitch.”

“Mr. Colón has routinely tweeted disparaging comments about U.S. Senators, U.S. House members, Cabinet officials, Republican voters, and news anchors, among others. For instance, he tweeted that he sees Trump voters as ‘deplorables’ and called Republican Senators who intended to vote to acquit President Trump in his first impeachment trial ‘traitors.’ He mocked Senator Susan Collins (R-ME) and other Republicans in a tweet referring to them as ‘clowns,’ referred to Senator Lindsey Graham (R-SC) as ‘Senator Snagglepuss’ and ‘#SenatorShameless,’ and called Senator Marco Rubio (R-FL) ‘Senator Jellyfish,’” the letter said.

Toomey went on to allege Colón “routinely used Twitter to propagate destructive conspiracy theories,” citing a retweet “insinuating that seven sitting U.S. Senators and a  member of the U.S. House of Representatives—Senators John Kennedy (R-LA), Jerry Moran (R-KS), John Thune (R-SD), Ron Johnson (R-WI), Richard Shelby (R-AL), Steve Daines (R MT), and John Hoeven (R-ND), and Representative Kay Granger (R-TX) — were Russian stooges because they took a trip to Russia during the Fourth of July,” while the lawmakers were on a CODEL, and retweeted a post alleging Trump did not win the 2016 election.

The Pennsylvania Republican said Colón’s tweets voicing support for defunding the police warrant further evaluation by the committee before he can be confirmed.

“Moreover, like Mr. Colón, Mr. Greene has tweeted controversial and troubling comments from his Twitter account, including support for defunding the police. For example, on May 30, 2020, Mr. Greene tweeted ‘No More Money for the Police’ along with a quote saying: ‘Here’s another idea: Imagine if the money used to pay the salaries of police officers who endlessly patrol public housing buildings and harass residents can be used to fund plans that residents design to keep themselves safe.’”

Toomey called for Twitter to provide the deleted tweets to the committee by June 3.

The controversial tweets could prove to be problematic in the confirmation process for the nominees. Earlier this year, Biden withdrew Neera Tanden’s nomination to be White House budget director after inflammatory social media posts emerged.

Tanden was ultimately tapped to serve as a senior advisor in the White House, a position that does require Senate approval.