Home » World News » Senior: The narcissist in chief brings it all crashing down

Senior: The narcissist in chief brings it all crashing down 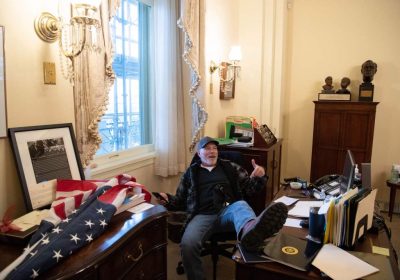 Our president has never been a very stable man. But I’m trying to think of what threshold of loco he had to clear in order for one of his senior advisers to confide in my colleague Maggie Haberman that Donald J. Trump “lost it” on the day of the insurrection.

Or for an administration official to describe him as “a total monster” to The Washington Post the next day.

Or for Rep. Adam Kinzinger, a member of Trump’s own party, to call for the Cabinet and the vice president to invoke the 25th Amendment because we require “a sane captain of the ship” to steer us through the administration’s final days, and “all indications are that the president has become unmoored, not just from his duty, or even his oath, but from reality itself.”

Our president has always been out there. But on Jan. 6, 2021, he clearly reached escape velocity and hurtled into space.

We shouldn’t be surprised. The president’s flight into the ozone of crazy was as inevitable as the country’s descent into anarchy — and almost certainly intertwined. Trump, as I and many others have noted, impeccably meets the criteria of a malignant narcissist, and he has a defect in moral conscience that is emblematic of psychopaths. People like this do not react well to being fired, divorced or kicked out of any club. They’re ego hemophiliacs. Their self-esteem cannot self-repair. And so the president is now doing exactly what all pathological narcissists of the malignant, conscience-free variety do when they’ve been given the boot. They behave dangerously.

They claim they are victims. They reject facts and call foul play. They blame everything — and everyone — for their failures except themselves. They accuse even their most loyal supporters of treachery. (On Thursday a White House official told The Washington Post that Trump was so angry at Mike Pence that “he couldn’t see straight.” Pence! But as I’ve often said, you can never love a narcissist enough.)

They take one reckless, desperate risk after another to keep their amour propre intact.

And most important, they lash out with an Old Testament vindictiveness, often destroying the very institution — or spouse, family, whatever it is — they were once sworn to nurture.

Which in this case is democracy itself. Trump is a man who found failure so intolerable, so humiliating, that he was willing to incite an acre-wide mob to violent insurrection, both in and around the Capitol, on Congress’ election certification day. Either he would get what he wanted or no one would. Five are now dead.

“Now we gather due to a selfish man’s injured pride,” as Mitt Romney said the night of the siege.

You know who could have predicted this? Researchers who specialize in bad CEO behavior. They’ve seen this movie dozens of times before. It’s textbook stuff.

“It should be absolutely no surprise that this is where we are,” Jennifer Chatman, a professor of management at the Haas School of Business at Berkeley who has written extensively about narcissistic leaders, told me. “It’s never a pretty transition when they have to go.”

They’re too entitled. They’re too in the habit of sowing distrust. They have disdain for rules — which in fact made them terrible leaders in the first place, prone to cheating and stealing and grift.

“They leave their organizations in terrible shape, both from a structural and cultural point of view,” she said.

As Trump has left the Republican Party. And the country at large.

Charles O’Reilly, a management professor at Stanford and a frequent collaborator with Chatman, reminded me that Adam Neumann, the disgraced, extravagantly grandiose former CEO of WeWork — his ambitions included becoming the world’s first trillionaire and living forever — presented an IPO prospectus that was patently bonkers in a last-ditch effort to save his company. It sounded awfully reminiscent of Trump’s deluded lawsuits.

O’Reilly added that most boards fail to stop such leaders, swooping in only when the company is falling apart, because they have too many incentives (money, power) to see them succeed. It sounded an awful lot like Congress. And every former White House official who’s finally speaking up.

You know where else you can find letter-perfect predictions of the president’s current behavior? Self-help books dedicated to helping people break up with the rotten narcissists in their lives. Seriously. I started burrowing into them in the last few days, more on a daffy hunch than anything else, and it turned out I could basically open any page — and I mean any page — and find something relevant to the president’s current behavior: That narcissists lurch between the role of victim and tormentor; that they are minor Shivas, destroyers of worlds; that they howl on and on about betrayal.

But it was this common thread that stood out: Pathological narcissists make a point of saying that their former partners would have been — and will be once again — nothing without them.

It rhymed with something a White House official recently said Trump was spewing about Pence: “All day, it was a theme of, ‘I made this guy, I saved him from a political death, and here he stabbed me in the back.’”

I do not by any means wish to suggest that Trump’s disordered personality is the key to understanding his presidency. It is, in some ways, almost tedious, exactly what makes him boring and uncomplicated, as shallow as a spoon.

But I also think it’s impossible to understand Trump’s behavior without looking at him through the prism of his pathologies, which at this moment are threatening lives. He may have made a robotic statement Thursday that condemned Wednesday’s violence and implicitly conceded the election. It’s too late. Trump remains a domestic security risk, and he’s made us a target for our enemies. They know that a fragile, unbalanced man is at the helm, his nerves as combustible as dry leaves. He’s desperate, and he’s angry, and he’s baitable. It makes us unsafe. We need to get him out.

Jennifer Senior has been an op-ed columnist since September 2018. She had been a daily book critic for The New York Times; before that, she spent many years as a staff writer for New York magazine, doing profiles and cover stories about politics, social science and mental health.

To send a letter to the editor about this article, submit online or check out our guidelines for how to submit by email or mail.