Beirut: The disappearance of a prominent Saudi journalist raises a dark question for anyone who dares criticise governments or speak out against those in power: Will the world have their back?

Dictators and autocrats have always sought to silence dissenters, even ones that flee abroad to escape their grasp. They seem to only get bolder in turning to their playbook of detention, threats and killings.

That may in part be because, despite decades of talk of human rights in international circles, violations get only muted reproaches.

In the United States, the Trump administration avoids strenuous criticism of human rights abuses by allies, like Saudi Arabia, Egypt, Israel and the Philippines, or leaders it seeks to cultivate ties with, like Russia, China and North Korea.

President Donald Trump's denunciations of "globalism" and tough stance against the International Criminal Court also have signalled that Washington has little interest in international enforcement against violators of human rights. Western countries have turned inwards, buffeted by rising xenophobic forces – and autocrats have either benefited from the vacuum or received outright support.

So when Turkish officials said they believed Saudi journalist Jamal Khashoggi had been killed last week after disappearing during a visit to his country's consulate in Istanbul, there was good reason to wonder whether there would be serious repercussions. 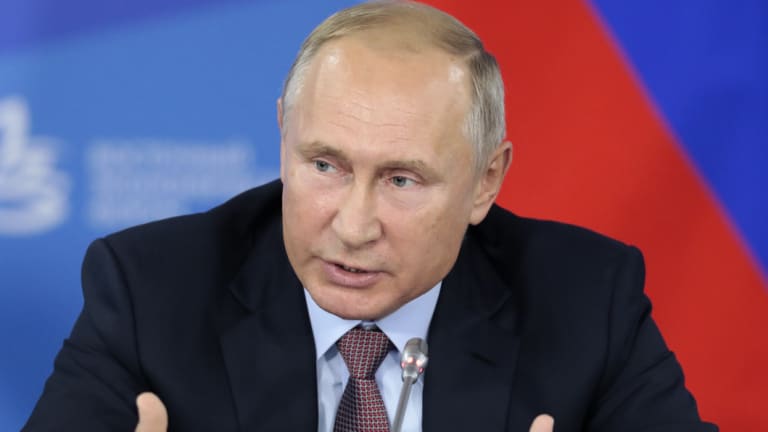 So too when China detained the now former Interpol chief after capturing him midair – the latest Chinese figure to vanish only to appear in court, accused of corruption.

So too when Russia was accused of poisoning an ex-spy in Britain.

Often economic and diplomatic interests lead countries to overlook killings, even of their own citizens.

In one of the most chilling recent cases, an Italian postgraduate student, Giulio Regeni, was found dumped on the side of a road outside the Egyptian capital, Cairo, his body mutilated and his bones broken. Suspicion in Italy immediately fell on Egypt's security forces, notorious for their use of torture. But nearly three years later, no one has been blamed, and while Italy says it continues to investigate, it has forged ahead with ties with Egypt, particularly with the development of a natural gas field off Egypt's coast by Italy's largest energy company, ENI.

Sara Kayyali, a researcher on Syria for Human Rights Watch, said Khashoggi's disappearance "is not just sad, it is terrifying."

"We are all taken aback by the lack of condemnation by any of our traditional allies for the acts that we are seeing happen, most recently with Jamal's case. I think it is a very challenging time for all of us and our traditional allies are not around," she said. "It looks like it is the age of impunity, but we won't let it go."

After the wave of pro-democracy protests that shook the Arab world in 2011 came the backlash – brutal crackdowns. As millions from Syria, Iraq, Egypt and Libya left their home countries, autocrats have tracked the vocal critics among them. 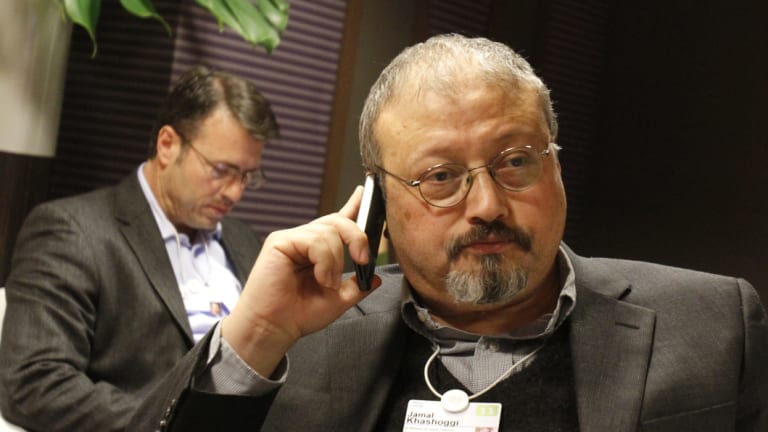 The Khashoggi disappearance has shaken the large community of Arab exiles who found relative safety in Turkey, said an Egyptian dissident who fled his country after the 2013 massacre. He had met Khashoggi only days earlier. He said he is considering where to go next, adding that his wife just got a job in Saudi Arabia, but he's afraid to go there. He spoke on condition of anonymity, fearing for his safety.

"It is a whole new level of dangerous," he said. It harkens back to the days when Libya's Muammar Gadhafi called his opponents in diaspora "stray dogs" and sent death squads to shoot them down in European capitals.

One prominent Libyan defector, Mansour al-Kikhia vanished from Cairo in 1993. His fate was unknown until 2012, a year after Gadhafi's ouster and death, when his body was found in a freezer in an intelligence building in Libya.

A Bahraini dissident living in Britain, Sayed Alwadaei, said these days he was afraid for his wife when she had to go to the embassy to notarise legal representation for a pending trial against her at home.

"We did not trust that if she goes to the embassy, she will leave unharmed," he said.

Bahrain's Embassy in London dismissed Alwadaei's concerns as "nothing more than a cynical attempt to exploit a current news story."

Today's dissidents have more tools to speak their mind from exile, making them more dangerous in the eyes of regimes back home. But the autocrats' toolkit is also more diverse.

Those in exile in Turkey say their governments have infiltrated their circles, spying on them physically and through social media. One Egyptian activist said he fled his refuge in Turkey after nearly five years because government spies infiltrated the opposition TV station he had set up.

With the government gaining more ground in Syria, activists fear they will now be chased in diaspora.

One prominent exiled Syrian, Rami Abdurrahman, who has monitored the war for years and has now become a British citizen, said he got word that a senior Syrian military official named him in meetings as the next target, "wherever I am." 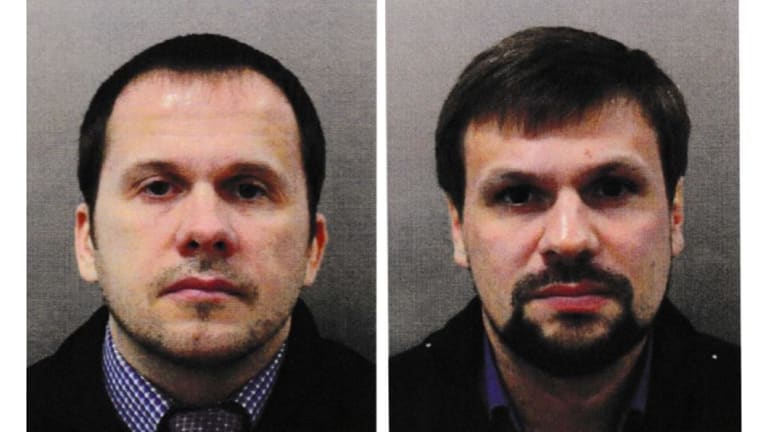 Alexander Petrov, left, and Ruslan Boshirov charged as the two Russians responsible for the Novichok poisonings of Sergei and Yulia Skripal in Britain. Boshirov’s real identity has been revealed to be Colonel Anatoliy Vladimirovich Chepiga.Credit:Met Police/AP

Russia has been accused of going after turncoat spies without paying much attention to borders and international norms.

In 2006, former Russian security officer Alexander Litvinenko, who fled to Britain and became a harsh critic of President Vladimir Putin, died after drinking tea laced with radioactive polonium-210 in London. Investigations concluded that Russia's security service killed him, likely on Putin's orders. The Russian government has denied any responsibility.

In March, former Russian spy Sergei Skripal and his daughter were found unconscious in the English city of Salisbury after being exposed to a Soviet- designed nerve agent known as Novichok. They spent weeks in critical condition but survived. Months later, a civilian died after being accidentally exposed to the poison.

British officials said the attack on the Skripals received approval "at a senior level of the Russian state" and announced charges in absentia against two Russian agents. The British government says it has evidence the men work for the Russian military intelligence agency. Moscow denies any role in the poisoning.

China's President Xi Jinping has increasingly defied foreign governments and international rights groups, bolstered by his country's global economic clout, military power and diplomatic weight. That's raised concerns over the fate of civic society within the country, as well as the risks of appointing Chinese officials to positions in international organisations.

Xi has waged a broad anti-corruption campaign that has ensnared numerous political foes – including among Chinese communities outside the country. 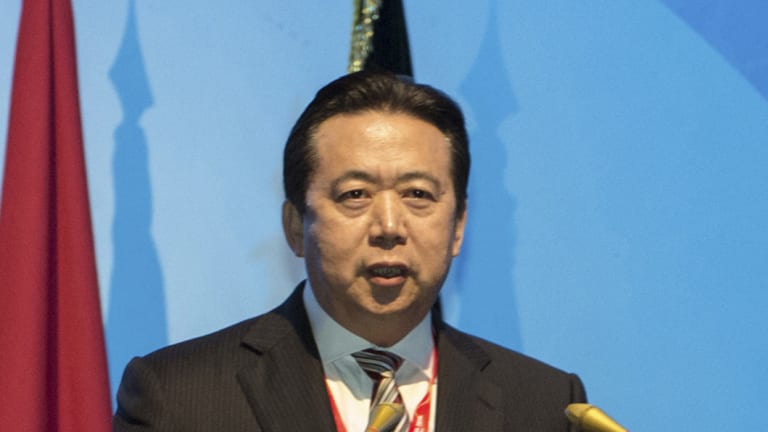 The most recent to fall afoul is Interpol's president, Meng Hongwei, who was taken into custody upon arriving in Beijing late last month. The Ministry of Public Security has since said that Meng, who left his post, was being investigated for accepting bribes and other crimes that were a result of his "wilfulness."

Such vague accusations are typical in China's highly opaque judicial system that has jailed figures such as the dissident writer and late Nobel Peace Prize winner Liu Xiaobo.

Beijing-based independent political analyst Zhang Lifan said China's handling of the Meng case undermines the leadership's insistence that theirs is a country "ruled by law."

"In China disappearance is something that happens quite often," Zhang said. "It's just that this time it was presented to the international public in such a special way."

A tenuous place in the ruling dynasty is no protection: witness one of the most brazen instances of assassination in recent memory, when North Korean leader Kim Jong-un's estranged half-brother Kim Jong-nam died in 2017 at an airport in Malaysia in an attack that authorities said used VX nerve agent.

In March, the Trump administration referred to it only indirectly, hedging perhaps with an eye to future diplomacy. Washington only determined that Pyongyang used chemical weapons, an apparent reference to the killing without going into any further detail.

Israel and the Palestinians have a history of assassinations. Israel's Mossad killed several top PLO and Hamas leaders in the Arab world and Gaza, while a Palestinian splinter group attempted and failed to kill the Israeli ambassador to the United Kingdom in 1982. Palestinian militants assassinated Israel's tourism minister in 2001. Tehran has blamed Israel for a series of slayings of top Iranian nuclear scientists earlier this decade.

During the post-9/11 'war on terror' under President George W. Bush, the CIA program of "extraordinary rendition" and torture of suspects to secret "black sites" was a key US strategy in neutralising the enemy. More than 50 countries participated with some like Poland and Lithuania allowing the jails to be run on their territory.

And of course, the United States carried out the most noteworthy assassination of this century when Navy SEALs under President Barack Obama's direction tracked down Osama bin Laden in Pakistan and killed him in 2011.

"It may take time, but we have long memories, and our reach has no limits," Obama would say, in his last State of the Union address.