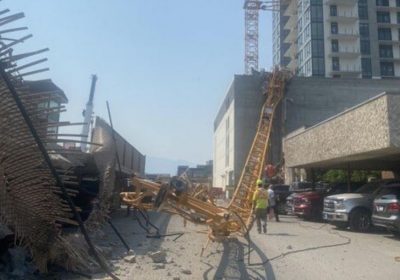 OTTAWA (NYTIMES) – Several people died when a construction crane collapsed on Monday (July 12) as it was being dismantled at the site of a 25-storey downtown condominium project in Kelowna in the Canadian province of British Columbia, the police said.

Videos and photos from the scene showed that the upright portion of the crane, which had been used to build the residential tower, was still standing, but that the remains of its boom were strewn over several adjacent buildings.

The authorities ordered the evacuation of buildings near the site and put the area under a state of emergency on Monday evening.

Inspector Adam MacIntosh, the action officer in charge of the Royal Canadian Mounted Police detachment in Kelowna, a popular tourist destination in the Okanagan Valley, said that there were “multiple, confirmed fatalities”, but he declined to say how many people had died or provide any information about them.

Mr MacIntosh told reporters that the crane collapsed at about 11am, damaging a nearby office building and leaving debris on the roof of a long-term care home. The evacuation took place as engineers began to assess the damage to the buildings and the stability of the remaining portion of the crane.

At a news conference, Mr Jonathan Friesen, chief executive of the Mission Group, the real estate firm developing the property, said that about 100 people were working on the site at the time of the collapse.

Mr Friesen said that the victims were all employees of subcontractors, not of his company.

“It doesn’t matter whose employees they were,” he said. “They were on our site and as a result of their work they did lose their lives.”

Mr MacIntosh said that officers were investigating the disappearance of one person who was not part of the construction crew.

Ms Krista Roessing, a Kelowna resident, told the Canadian Broadcasting Corp that she was driving past the site at the time of the collapse.

“It looked like the crane was moving but then I realised that it wasn’t moving in a fashion where it was operating – it was coming down,” she said.

The collapse led to a loss of electricity to several downtown buildings, including the police detachment.

Because the collapse was an industrial accident, Mr MacIntosh said, the investigation will be led by the provincial agency that provides workplace insurance and that sets safety standards.