Swimmers at Lake Parramatta have appealed to the local council to shift the swimming zone and raise awareness of the risks associated with eel-tailed catfish, following reports of people being slashed during breeding season.

For families with children, it can be a shocking experience, says community advocate Kellie Darley. 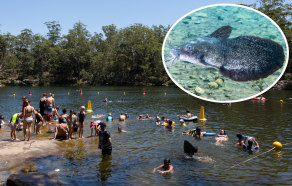 “Kids, you know, they get very skittish. So if you’re coming out of the water with blood running down your legs, it can be a bit of a shock," she said. "You have got to be warned.”

Jade Elizabeth Birks is worried about her kids.

But those who have experienced an eel-tailed catfish slashing have described the attack as one of more shock than pain, raising further concerns over the reaction of children in the water, particularly if they're inexperienced swimmers.

"This time last year, my daughter got bitten," said Jade Elizabeth Birks, 30, a Parramatta mother and frequent swimmer at Lake Parramatta. "Just a few days ago [when we were there], we counted easily 20 people who’d been bitten. Well not bitten, slashed, with their tails."

Attacks are usually made by the male eel-tailed catfish during breeding season, reports the NSW Aquaculture Association, and can take one of three forms — the barbed slash being the most dangerous.

The male eel-tailed catfish will pitch its fins and spines, and slash its target as it rushes past them at high speed.

"After the slash, we had to warn a few people," Ms Birks said. "My three-year-old has only just gotten used to the water.

"What’s really scary is, when we were there last time, a young boy looked like he was about to drown after it happened to him. He started panicking, and people had to go and help him. He was that panicky, that he almost pretty much drowned."

"I’m sure both the fish and the swimmers would be happier.”

Catch all the day’s breaking news