Grieving parents have been left ‘heartbroken’ after thieves stole a gnome dinosaur ornament from their stillborn son’s grave.

Anita Pinnock and partner Ben Hargreaves discovered the tribute had been pinched from the memorial at Carmountside Cemetery in Stoke-on-Trent, Staffordshire.

The couple, who visit their baby son Alfie’s grave every day, are now calling for CCTV cameras to be installed to prevent more thefts in the future.

Staffordshire Police have now launched an investigation into the incident. 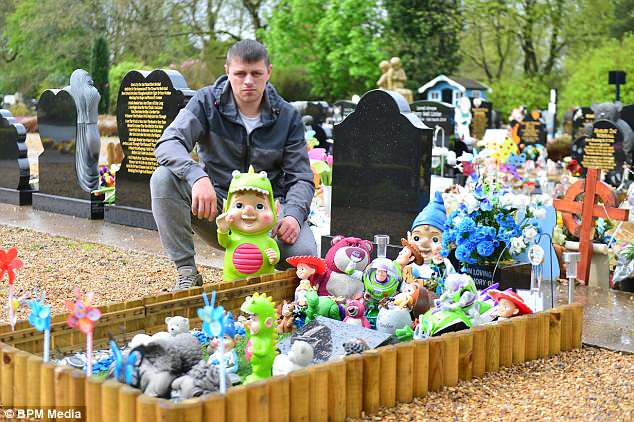 Father Ben Hargreaves, at his son’s grave, said he just ‘broke down’ when he discovered the theft

Ms Pinnock, 28, said: ‘Alfie’s grave has a Toy Story theme and we have put quite a few things there for him.

‘When we visited his grave on Monday his dinosaur gnome had gone. We couldn’t believe it.

‘It’s heartbreaking. Alfie had his life stolen and now people are stealing his things.

‘The person that has done it knows it is a baby’s grave.’

The 18-inch tall figure – a gnome in a dinosaur costume – disappeared between the couple visiting last Sunday, and when they went back at 12.30pm on Monday.

It has Alfie’s full name and grave number written on the bottom. Alfie was stillborn on New Year’s Day, four weeks before his due date. 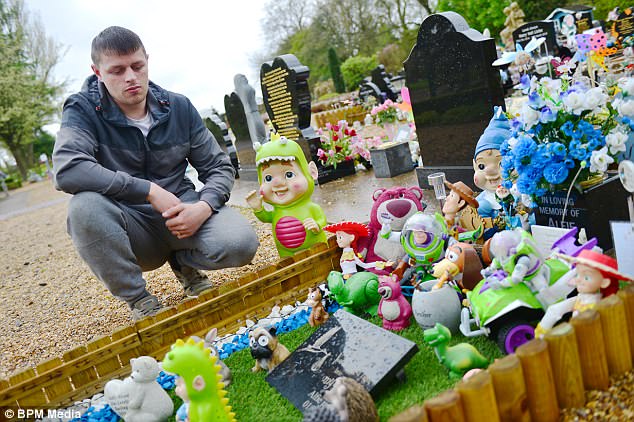 Mr Hargreaves at the grave for his stillborn son Alfie in Carmountside Cemetery in Stoke-on-Trent, Staffordshire

The couple, of Brown Lees, near Stoke-on-Trent, confirmed that the gnome had not been removed by staff, and they have reported the theft to police.

Ms Pinnock added: ‘It was filled to the top with sand so it would have been really heavy, so I don’t think it could have been kids that took it.

‘There was a windchime hooked over it which was taken off and left there.

‘The thought that someone has done that is awful. If they wanted one they could get one from Asda for £22. Instead they take it from an innocent child.

‘We have asked for cameras to be put in the baby area – the most important things are the graves and keeping them safe.’

Ms Pinnock and Mr Hargreaves, who also have sons James, 11,  Jaydon, six and four-year-old Ethan, have since replaced the gnome and are now worried that other items may go missing.

Mr Hargreaves, 26, said: ‘We have decided we are going to have to cement things down to stop people taking them, to give us peace of mind.

‘When it happened I just broke down. The thought of someone stealing something from your child – I can’t believe anyone would do something so low.

‘The boys come with us to visit their brother so they have been upset too.

They have been asking where Alfie’s gnome is, so then you have to explain that someone has taken it.’

Councillor Randy Conteh, cabinet member for housing, communities and safer city, said: ‘We deplore the actions of those who undertake such mindless acts, which cause nothing but hurt for the friends and family of the deceased.

‘We have spoken to the couple who have reported the incident to the police on our advice, and we will support their investigation in any way we can.

‘If anyone sees suspicious behaviour at the cemetery I would urge them to speak to a member of staff, or report the matter directly to police.’

Staffordshire Police are investigating the incident.

A spokesman said: ‘At 1.48pm on April 30 we received a report of a theft of a gnome from a child’s grave at Carmountside Cemetery and Crematorium on Leek Road.

‘The theft is believed to have happened sometime overnight.’

‘Anyone with any information is asked to contact us on 101, quoting incident number 361 of 30 April.’