But not a single word that followed. Not even the bit about “divorce lawyers”. 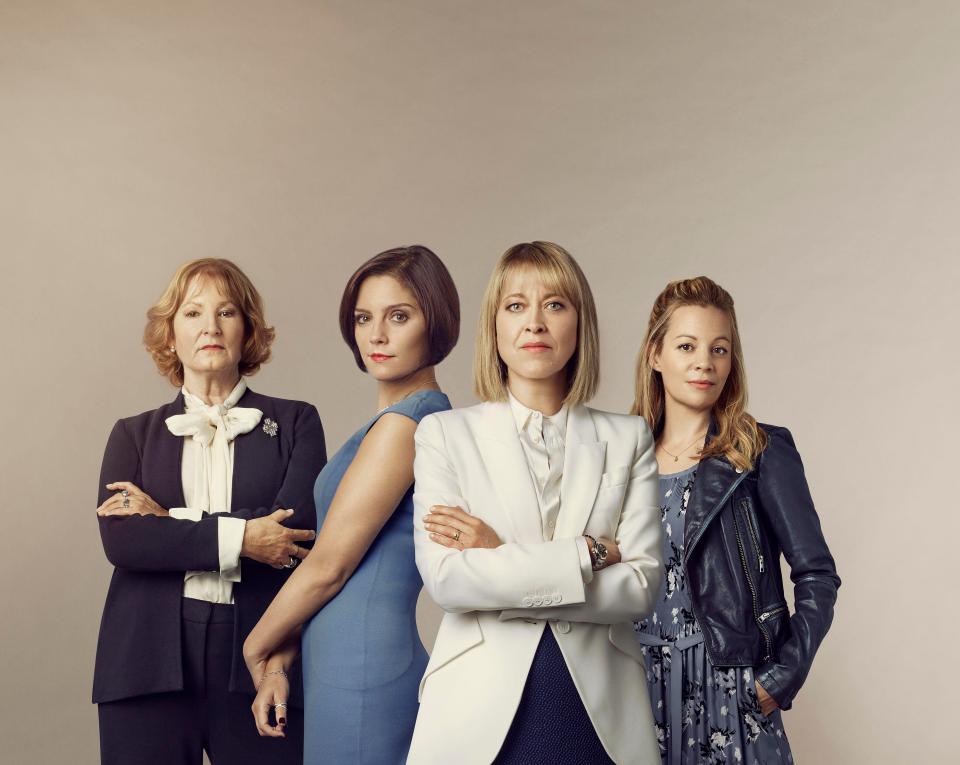 She could’ve told them she’d cast Zippy, George and Bungle in the main roles and they still wouldn’t have been listening. By that point, it was already “Go! Go! Go!” for The Split, which succeeds in doing the only thing the BBC really cares about passionately these days — politically correct box-ticking — but fails in every other respect, including the most obvious one.

It’s the wrong subject. Even those of us who’ve never needed one instinctively hate divorce lawyers, especially the rich, right-on London variety.

So attempting to humanise them, in the space of six episodes, is like setting off up Mount Everest in a pair of flip-flops.

Suffice to say this one wandered off a cliff before it even reached base camp. 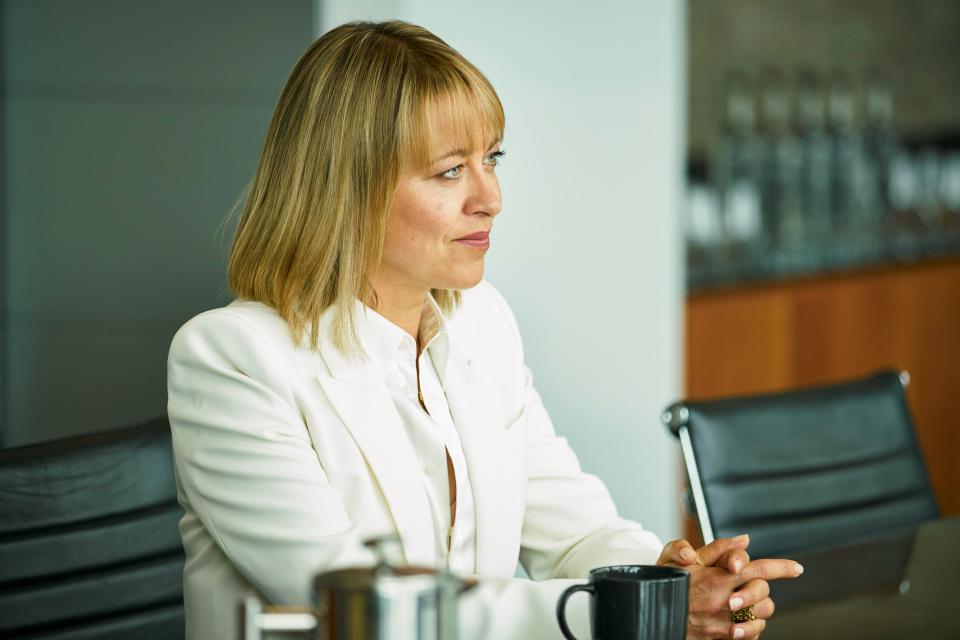 What episode one offered us, though, was an unlikely story about three sisters all working as high-profile London lawyers.

Fiona Button’s Rose is getting married, Annabel Scholey’s Nina definitely isn’t and Nicola Walker is a sanctimonious pain in the rear called Hannah who’s got the job of telling the others “Dad’s back” after a 30-year absence.

A lot like the bloke from Buffy The Vampire Slayer, seeing as you ask, Nina, which isn’t the only credibility issue with the casting.

As well as refusing to believe Anthony Head is their dad, I’m assuming none of you believe any of those three are sisters, let alone lawyers. You’re also probably having trouble with the idea Stephen Tompkinson’s a multi-millionaire who’s divorcing Meera Syal and not even entertaining the idea Tanya Franks is involved in a messy break-up with Matthew Baynton’s stand-up comedian, Rex Pope, given you probably saw her marrying Max Branning on EastEnders an hour ago. 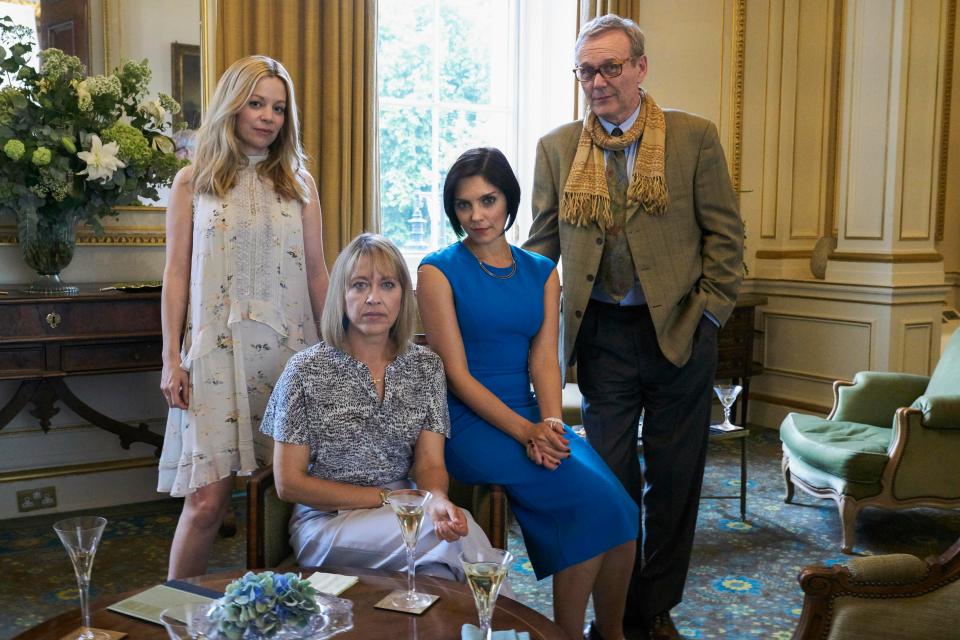 Clumsy casting wouldn’t matter so much, obviously, if The Split had some give-a-toss plots and a decent script.

It’s got neither, though, and if it’s not drowning in baffling legalese it’s coming across like one of Davina’s shampoo adverts.

It doesn’t end there, though. Any full list of The Split gripes should also include: Stephen Mangan, in full smug mode; an oddly named Dutch bloke, Christie Campbell, who is a lager commercial waiting to happen and has the inexplicable hots for Hannah; and the actual legal procedures themselves, which break every strict code in the profession. 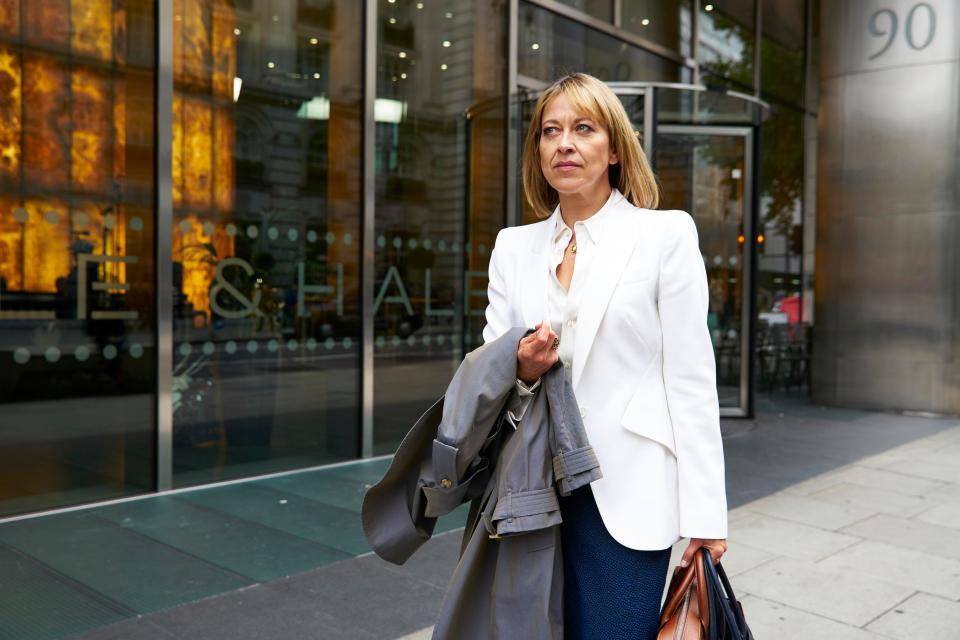 In such hopeless circumstances, the best thing any drama can do is start sending itself up, sharpish, Howards’ Way style, and play it all for laughs.

But if there are two characteristics an increasingly long list of 2018 BBC dramas — like Collateral, McMafia and Troy — all share, it’s a tendency to take themselves very seriously and flop fairly spectacularly.

It’s probably not a pattern The Split’s about to break.

In fact, I can already sense the writer’s desperation bubbling to the surface when Rex Pope is asked to remove all the “ex-wife” jokes from his stand-up routine and screams: “How else do you expect me to shine this s***?”

Answers on a postcard, please, to the Head of BBC Drama. 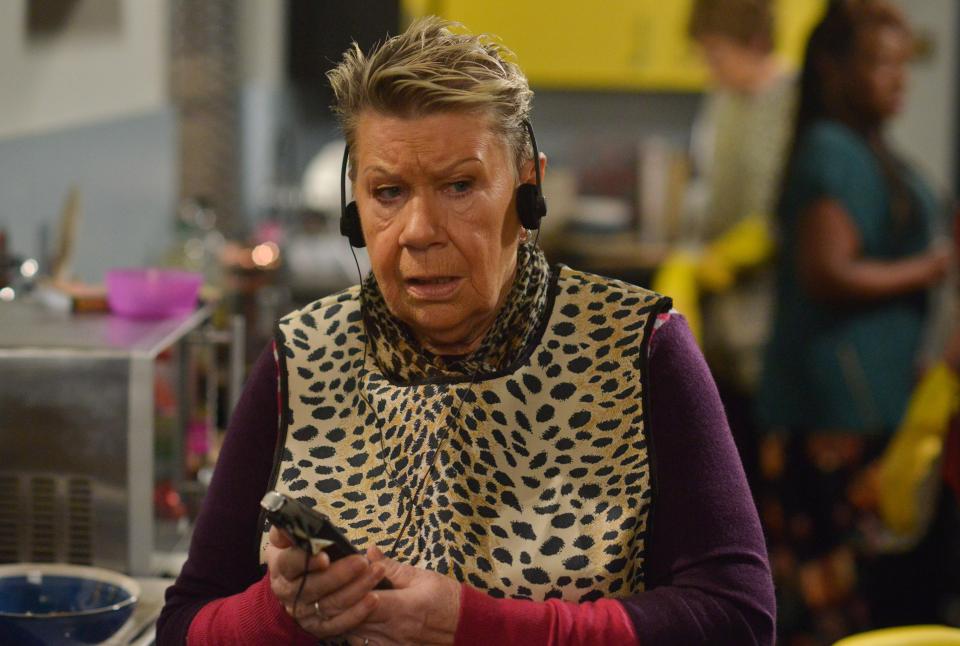 UNPRECEDENTED goings-on in Albert Square, where the most appropriately named EastEnders character of all time, Rainie Cross, the crack-addicted, alcoholic prostitute, has returned having discovered God and Max Branning.

Though not necessarily in that order. Together, they’re now running and living inside the car lot which magically regenerated last week like a giant, ginger Mekon’s Tardis.

Also weird is the fact Kat’s been back from Ireland for weeks now without updating everyone on Alfie’s brain tumour or casually mentioning she discovered a long-lost son who’s a homicidal priest called Dermott Dolan, while in Redwater. 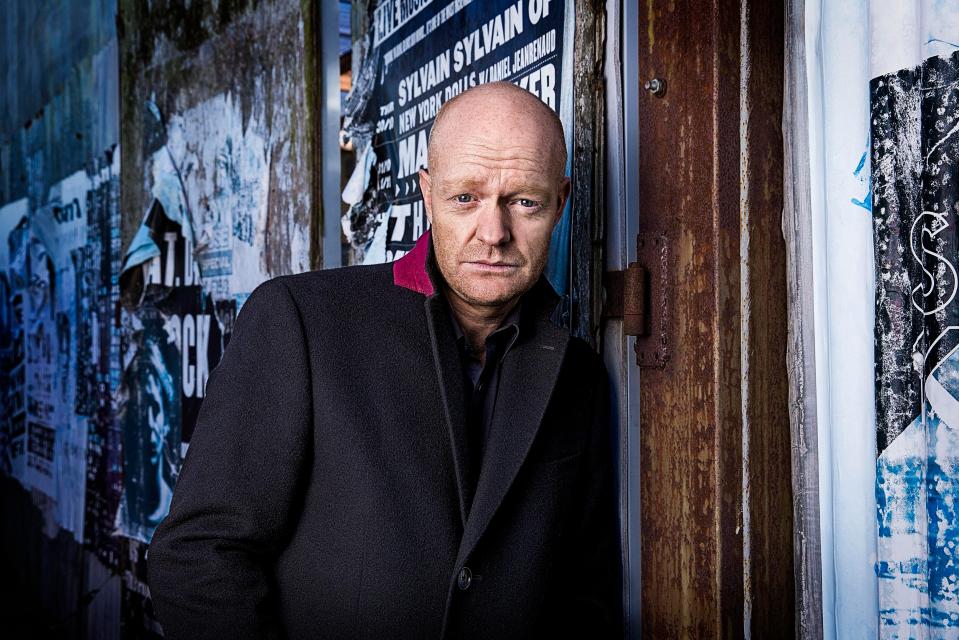 It all pales into small-talk, however, compared to the fact that at 19:37 on April 26, 2018, for absolutely no reason, Big Mo suddenly piped up: “They don’t watch The Flintstones in Saudi Arabia . . . but they Abu Dhabi Dooooooo!”

Carve that date in marble and celebrate it every year. The day they told an actual joke on EastEnders.

HAS light entertainment ever produced anything quite as terrifying as Bobby Crush impersonating Liberace, on the Last Laugh In Vegas finale?

Jeez, not even the real thing was quite that sinister, surely.

One of those occasions when a picture cannot do full justice to the horror of the real thing. 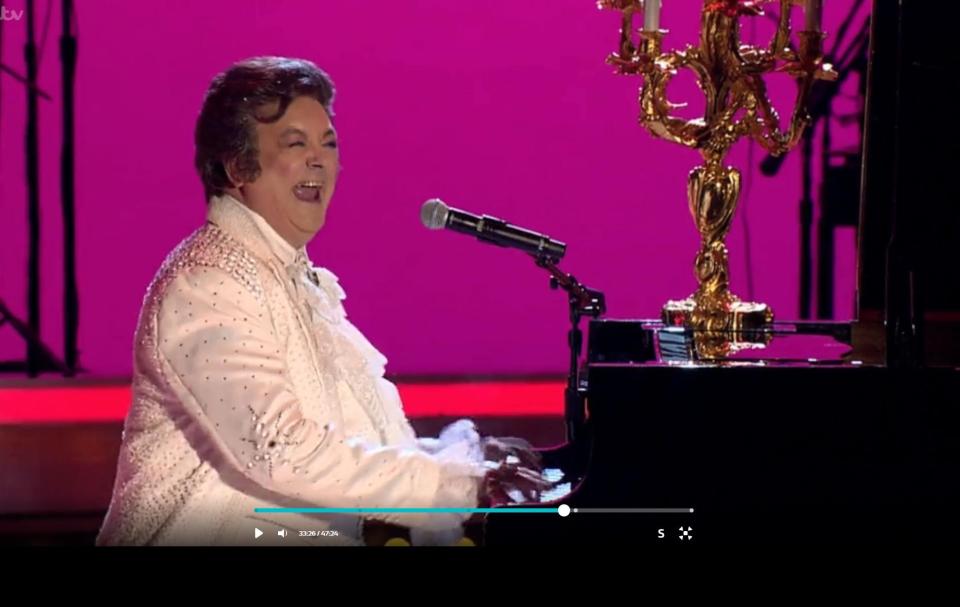 (Climb over women and children if you need to escape in a hurry.)

A miracle and a mercy then that Mick Miller, Bernie Clifton and Cannon & Ball managed to salvage the veterans’ big Vegas gig as any other ending would’ve been a disappointing way to finish such an entertaining series.

More fun than the actual performances, though, was the group dynamic and the puncturing along the way of some monstrous old egos who set out on this ITV adventure a month ago. 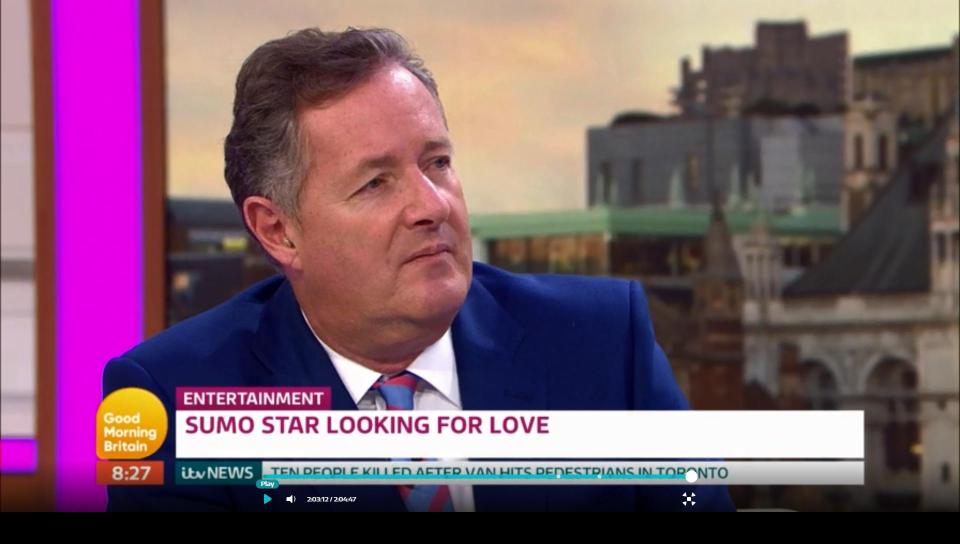 Particular highlights being Bobby Crush, “a pianist from the UK”, receiving the response “You’re a penis?”, Jess Conrad’s real name (Gerald Arthur James) being rumbled inside Flaming Eagle’s desert teepee and a disgruntled/hungover Kenny Lynch snarling: “They should use Su Pollard for waking up the dead.”

Which they might just have to, if Last Laugh In Vegas ever gets another series.

SEAMLESS handover of the week

This Morning, Schofield: “Next, we’re talking vaginal rejuvenation with Danielle Lloyd and her mum. First, let’s find out what the Loose Women are talking about.”

Andrea McLean: “Coming up, Chris Packham will be opening up . . .” More of the same, then.

QUIZ-show mouth-breathers of the week. The Chase, Bradley Walsh: “In 1964, Northern Dancer ran what US race in a then-record time of two minutes flat?”
Mamta: “The Boston Marathon.”

Bradley Walsh: “Boxes was a 1988 art installation by which so-called Young British Artist?”
Will: “Gainsborough.”

Tipping Point, Ben Shephard: “Which endangered animal has an enlarged wrist that functions almost like a thumb enabling it to grip food?”
Dan: “The black rhino.”

Bradley Walsh: “Whose funeral in 1806 saw The Times use an illustration for the first time?”
Phillipa: “Margaret Thatcher.”

GREAT TV lies and delusions of the month.

The Charlotte Show, Josh Ritchie: “Charlotte’s the same as me. Such a smart girl and so clever.”

Good Morning Britain, Susanna Reid to Piers Morgan: “You should go up to Scotland more often.” He f***ing shouldn’t.

And Last Laugh In Vegas, Su Pollard: “Good- bye London, hello Vegas, this is where I belong.”

Su Pollard is appearing in Snow White And The Seven Dwarfs, at the Malvern Theatre, from December 13.

ITV’s Last Laugh In Vegas finale. The sad and volatile ending to Will Millard’s brilliant My Year With The Tribe.

THIS week’s winner is Ross Kemp and Jimmy Wisniewski, from Brickleberry (search me).

Frank Skinner’s Urban Myths impression of Johnny Cash failing to get him locked up in San Quentin. Geordie Eeyore Kevin Maguire killing the Good Morning Britain party vibe, almost every day, at 6:20am. The BBC’s Nicholas Witchell actually wondering out loud if the royal baby name was “a subtle message of solidarity with Europe”. (No.)

And mollycoddled Britain reaching the stage where Watchdog Live thinks it needs to instruct us all in the art of wet-wiping shopping trolleys for bacteria. Watch yourself, people. They’ll be coming for your bums next. Trust me.

Harry Maguire: “What I’ve learned is that football is football.”

Leon Taylor: “These boys have plenty of bows to their string.”

And Chris Brunt: “You could stand here all day and pick bones in our season.”

OBSERVATION round. Who said the following things last week: “It’s a gruesome, five-ton lump of London’s fatberg.” “A silent beast.” “It’s toxic.” “And it’s here now in the flesh.”

A) Rick Edwards on Secrets Of The Sewers?
B) David Dimbleby introducing Diane Abbott on Question Time?