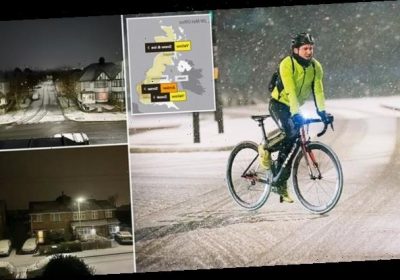 Snow has hit London this morning as the Met office issued an amber weather warning for the south east with up to four inches of the white stuff set to fall.

Drivers warned of ‘horrendous’ conditions on Britain’s roads as the wintry weather hit the Home Counties and some villages are at risk of being ‘cut off’. An amber alert is in place for road closures and power cuts.

An amber weather warning has been issued in Eastern England between 5am and 2pm covering Essex, Hertfordshire, Cambridge, Norfolk and Suffolk. Snow is also expected in London, Kent, Sussex and further north across East Anglia and the East Midlands.

Drivers on the roads in the early hours warned of treacherous conditions on the M40 towards London. One Twitter user wrote: ‘Horrendous journey into London. Crashed car across carriageway north of Cherwell Services on M40. (Called police). Further south, carriageway surface dangerous with falling snow.’

Highs of 7C (44.6F) are expected across London today after freezing temperatures overnight, with the mercury only dropping three degrees to stay around 4C (39.2F) tonight. 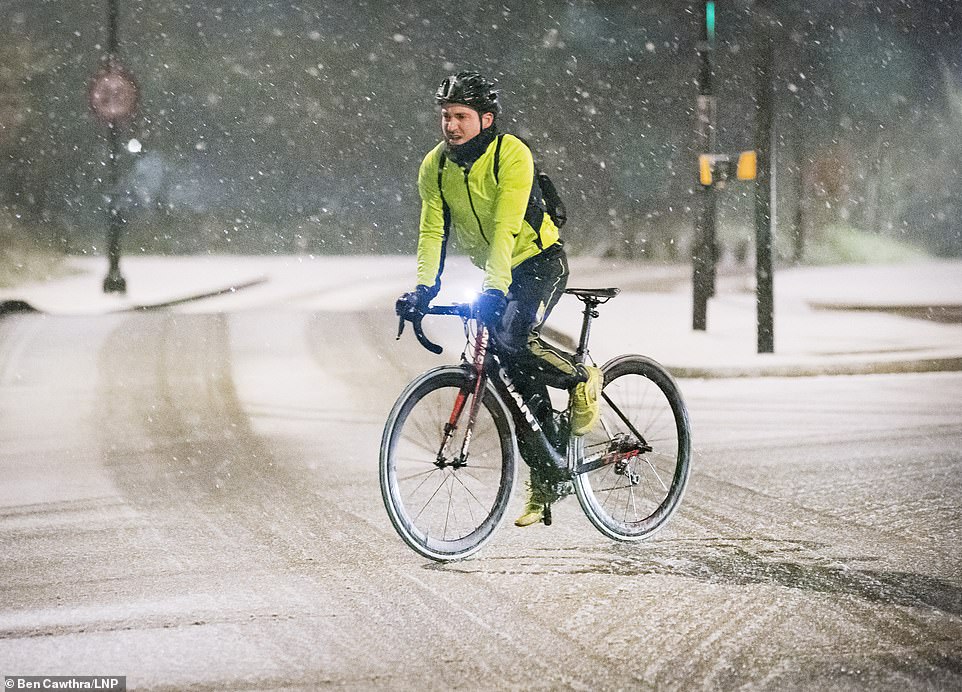 Heavy Snow at Hampstead, north London, as large parts of the UK are expected to be blanketed in snow and freezing conditions today 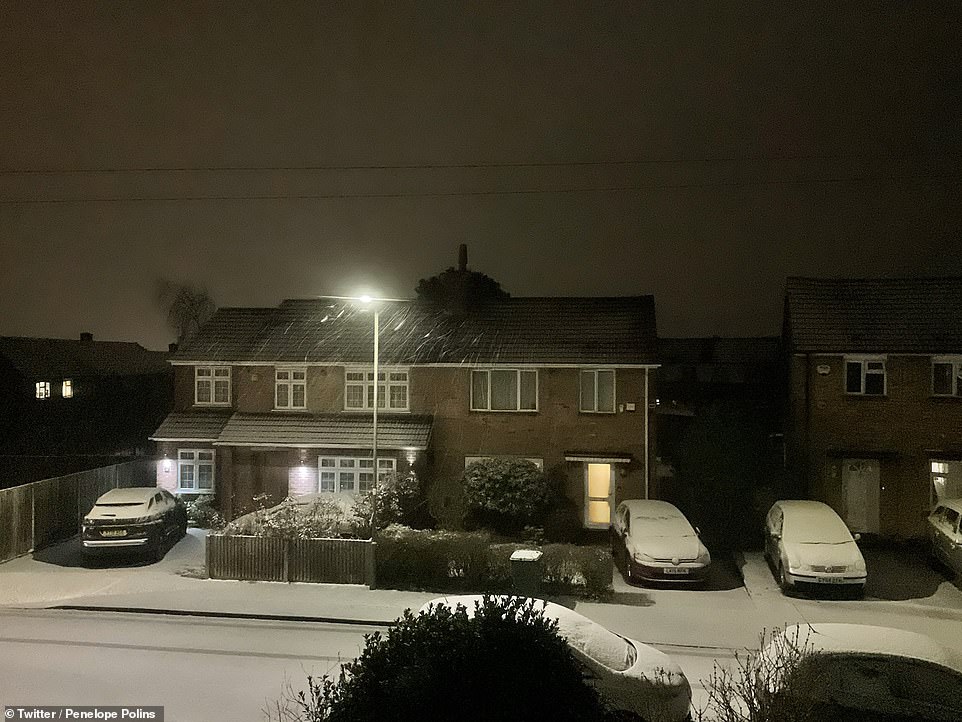 An amber weather warning has been issued in Eastern England between 5am and 2pm covering Essex, Hertfordshire, Cambridge, Norfolk and Suffolk. Snow is also expected in London, Kent, Sussex and further north across East Anglia and the East Midlands. Pictured, snow in London 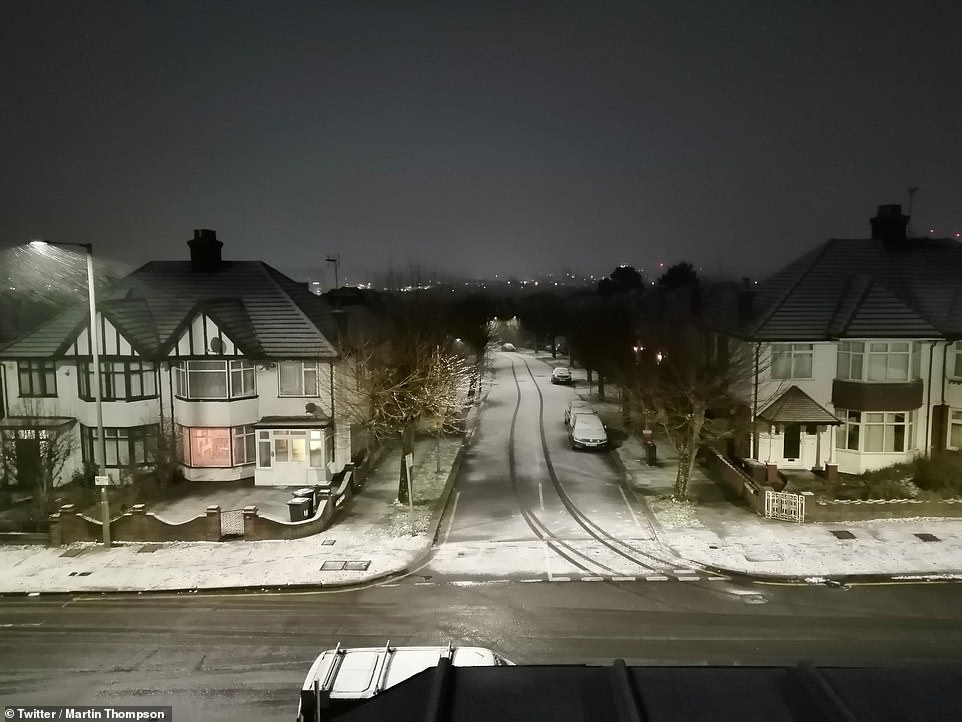 Drivers on the roads in the early hours warned of treacherous conditions on the M40 towards London. One Twitter user wrote: ‘Horrendous journey into London. Crashed car across carriageway north of Cherwell Services on M40. (Called police). Further south, carriageway surface dangerous with falling snow.’ Pictured, a snow-covered London street 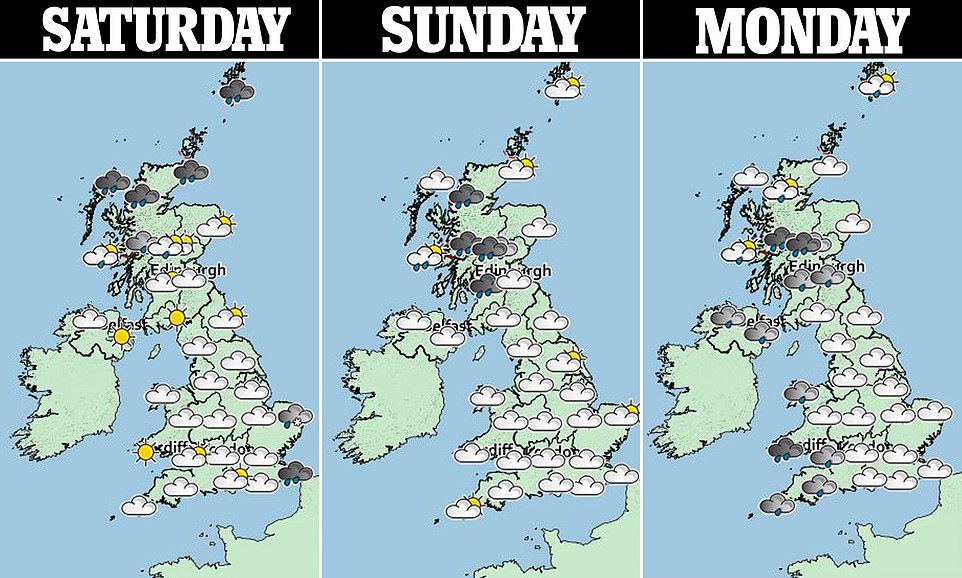 Temperatures plummeted as low as -11.8C (10.8F) at Ravensworth, North Yorkshire, as the mercury took a dip in northern areas with lying snow yesterday. It was the coldest temperature recorded in England since January 31, 2019, when -13.2C (8.2F) was recorded in County Durham.

The Met Office warns some rural communities – even in the South – ‘could become cut off’ and that there could be further treacherous travelling conditions today.

The weather warning, which lasts until the evening, extends as far as Kent and the North Downs, and also includes Oxfordshire and the Chilterns.

Grahame Madge, Met Office spokesman, said: ‘We have a weather front moving across through the day, which will fall as heavy rain further west, where there is mild air, and turning to snow when it hits cold air in the East.’ 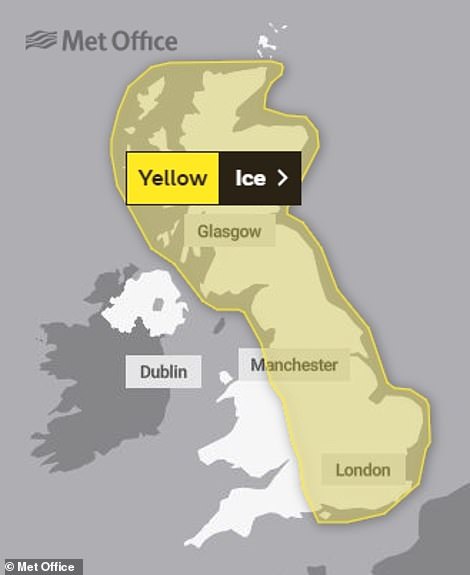 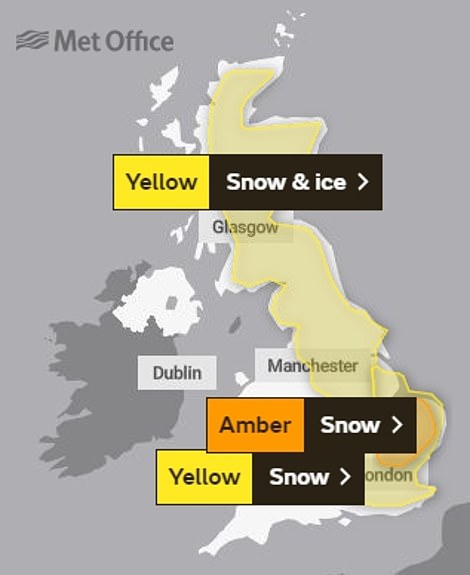 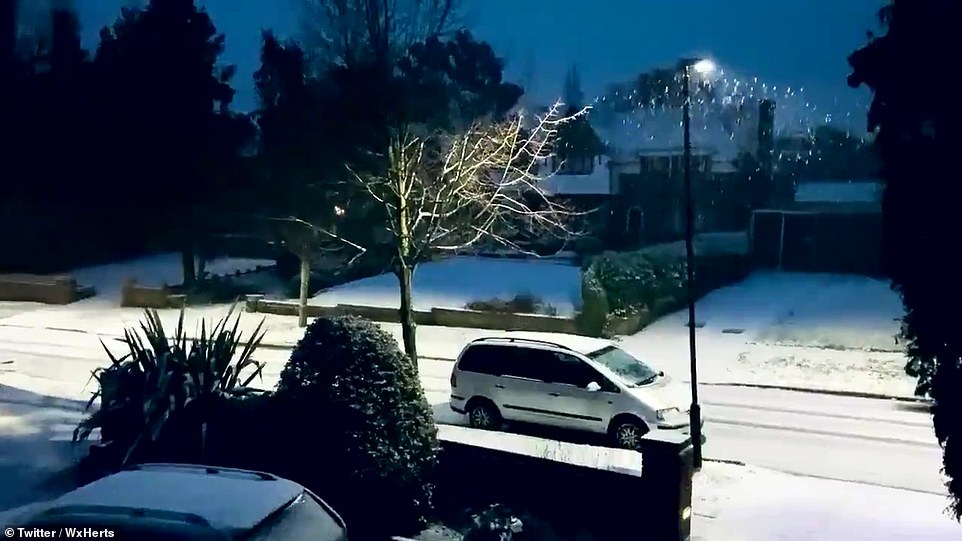 Snow covered streets in Enfield, London, early this morning, as an amber weather warning was put out by the Met Office 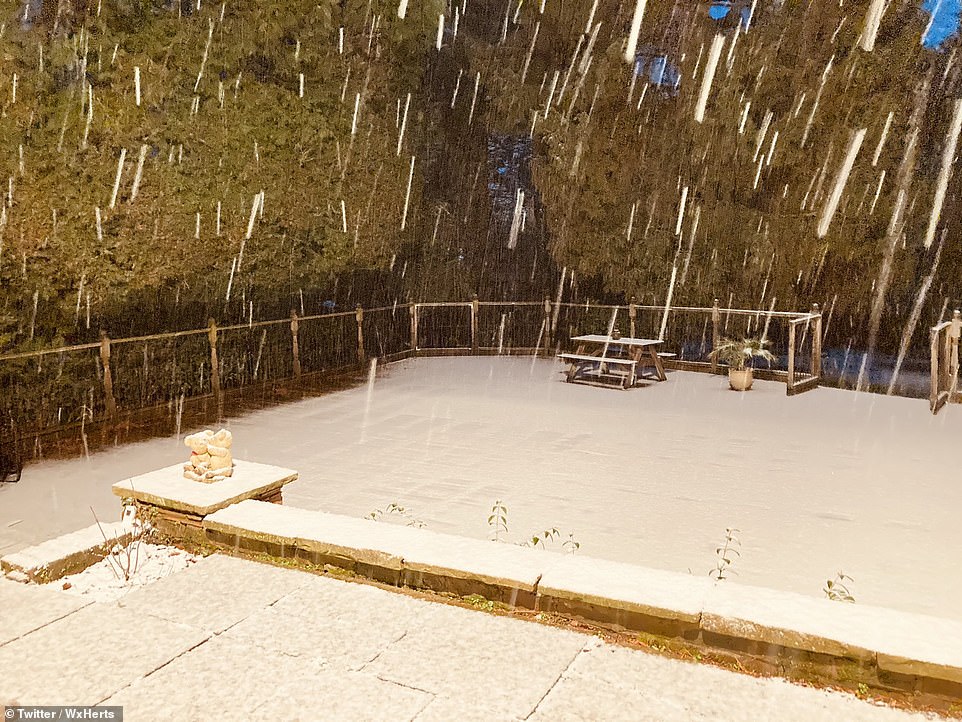 A patio and garden was completely covered in the white stuff in Enfield, London, early Saturday morning 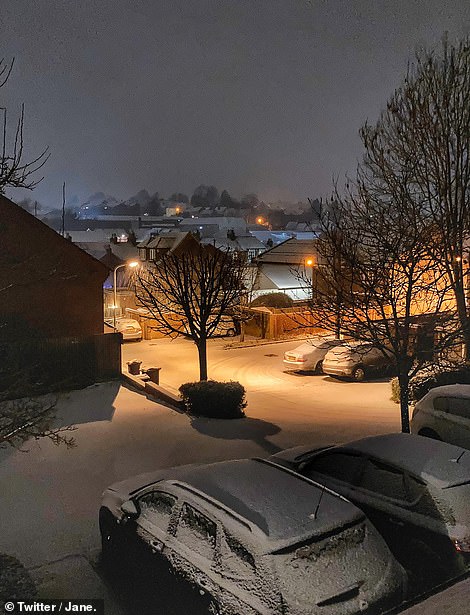 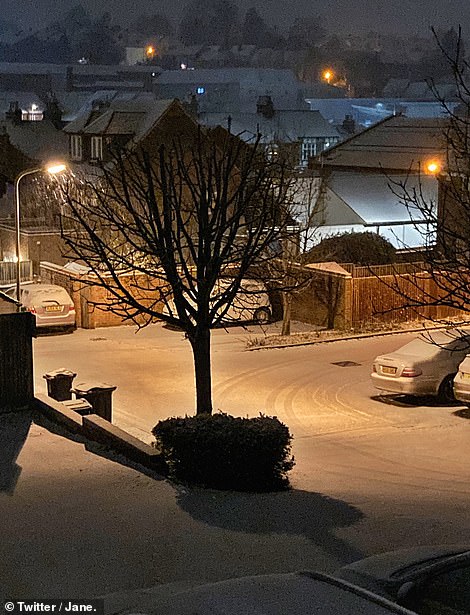 Cars and houses were coated in a layer of snow in Chesham, Buckinghamshire, as cold weather continued south last night 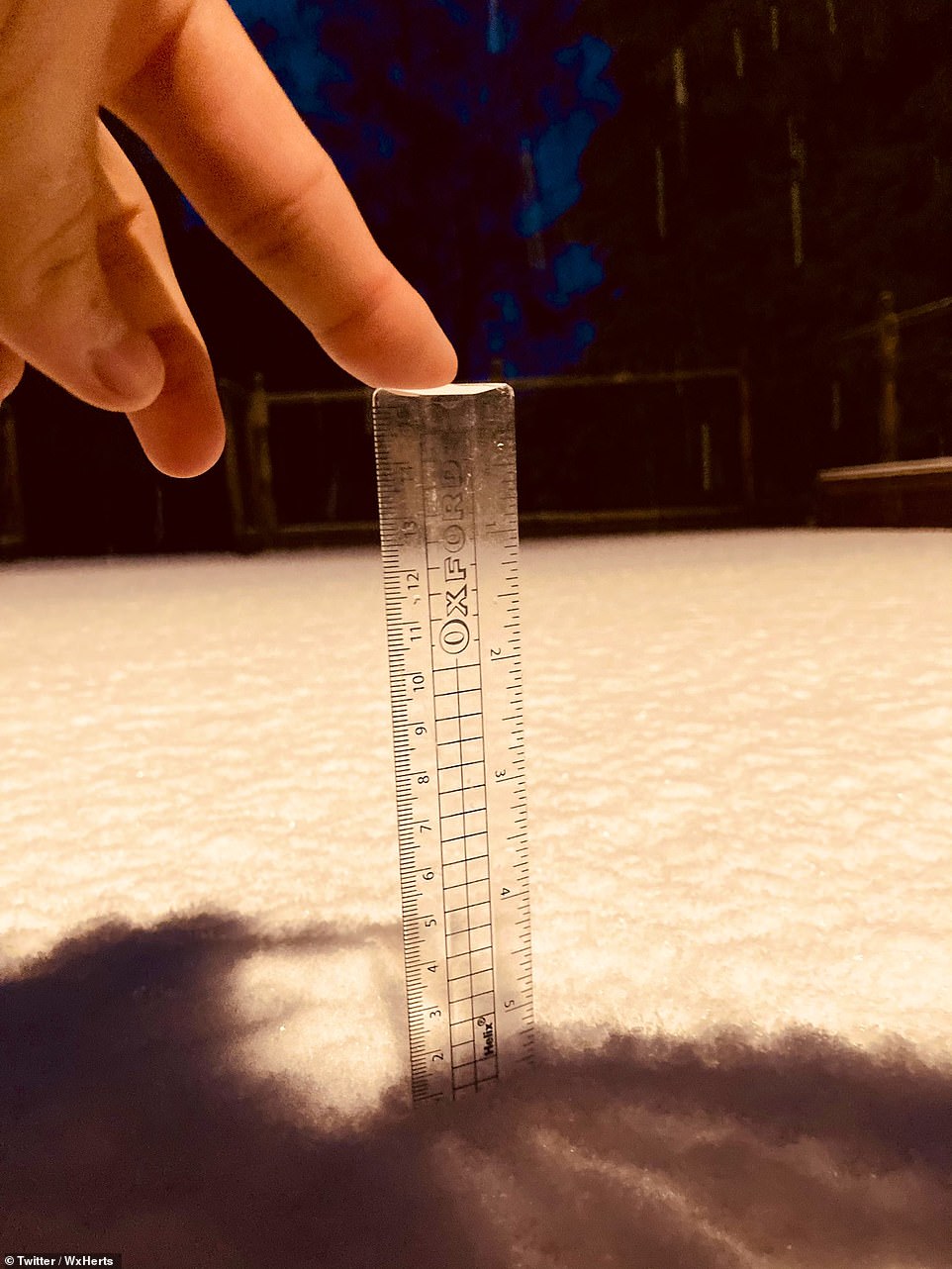 A Twitter-user in Enfield, London, took out a ruler to measure almost a centimetre of snow this morning. He wrote: ‘It’s tried its best to settle on gritted roads but intensity is lowering now to 4/10 EN4 #uksnow ..embarrassingly this is probably the most snow here in almost 2 years (since early Feb 2019)’ 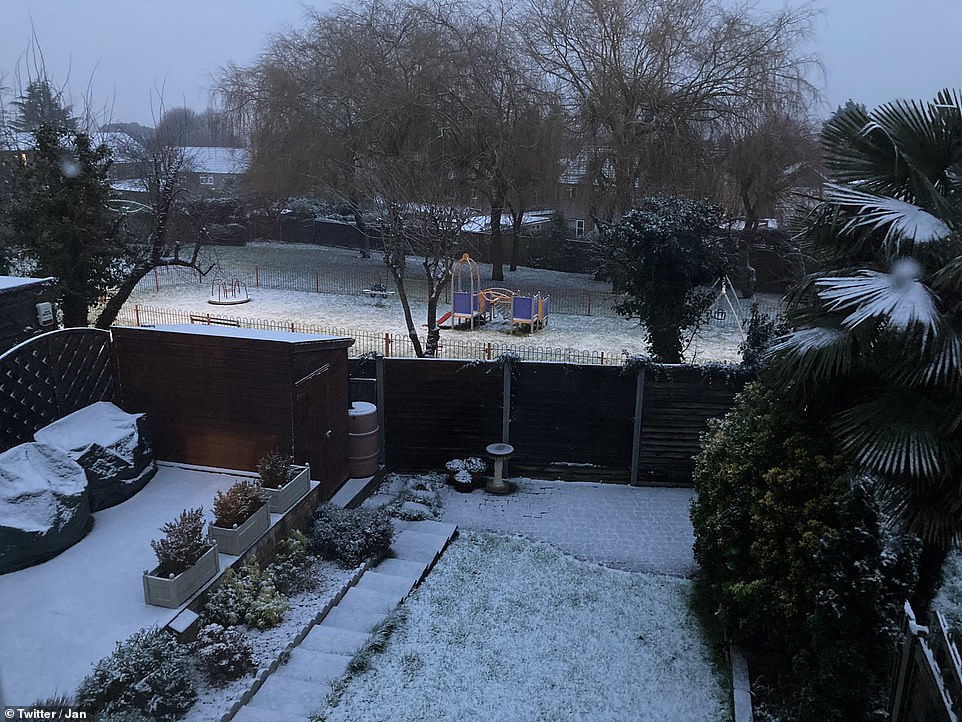 A garden was covered in a light coating of snow in Chesham, Buckinghamshire, early Saturday morning 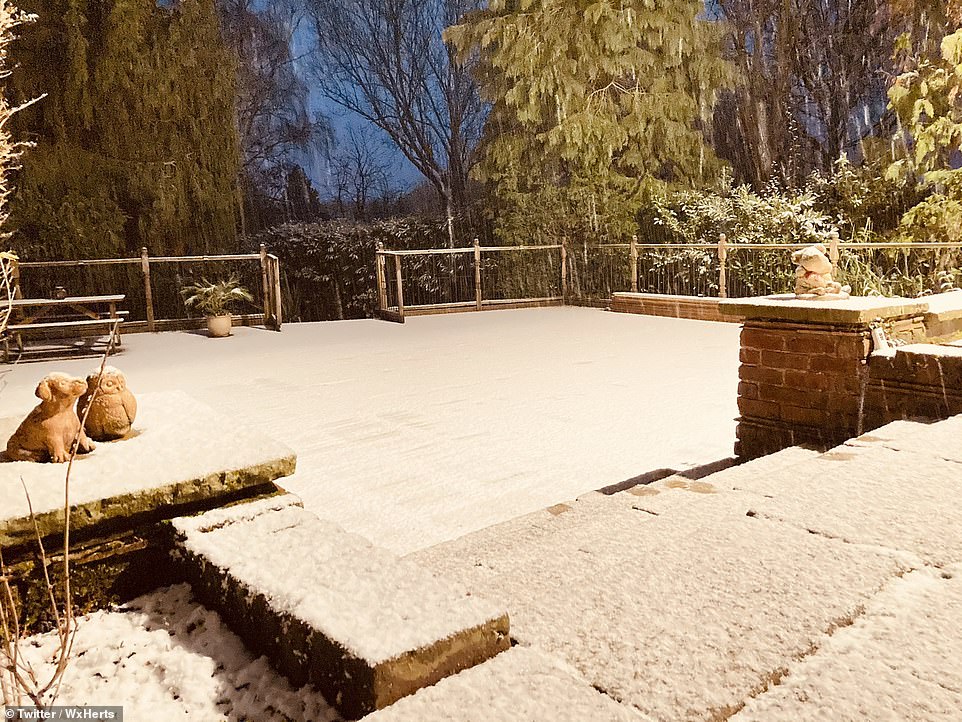 Snow in Enfield, London, as the sun started to rise early Saturday morning ahead of a day of wet and wintry weather

Hold your horses… lots more snow on the way

Heavy snow brought transport chaos but at least some had the horsepower to cope.

For Stephanie Anderson it was a chance for a gallop with Clydesdale horse Davie near their home at Westruther in Berwickshire in the Scottish Borders.

The Clydesdales are working horses and help plough the land for her family’s market gardening business, and they are also used for events such as weddings. 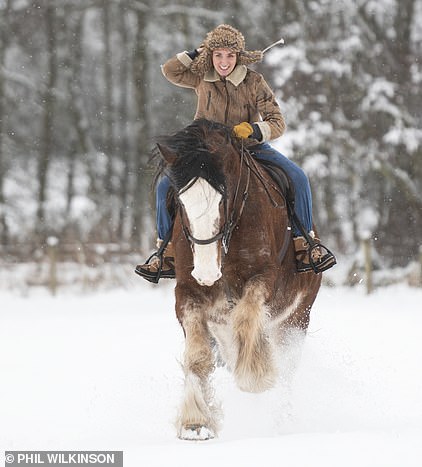 On the hoof: Stephanie Anderson out for a gallop with her horse Davie near their home at Westruther in Berwickshire

A Met Office spokesman said: ‘The highest accumulations of snow were in North East England, where 15cm (6in) was recorded at Copley, County Durham.’ He said snow was recorded as far south as Lakenheath and Marham, in Suffolk.

Main roads in Scotland were brought to a standstill on Thursday, particularly in areas with an amber ‘be prepared’ weather warning. In Dunblane, Perthshire, one resident said the only traffic was sledges.

In Renfrewshire, drivers abandoned their cars after a number of accidents blocked local roads.

One motorist thanked locals on Church Road in Giffnock for bringing her tea following a dramatic three-car crash. She wrote on social media: ‘Don’t think I will see my car again.’

On the Stewarton Road, linking south Glasgow with Newton Mearns, cars were abandoned, while police used their vehicles to block off roads.

Train services between Glasgow and East Kilbride were suspended for a while after a vehicle crashed into a railway bridge in Busby.

Heavy snowfall blocked the A9 southbound at Dunblane, with traffic being diverted through the town. Those aged over 80 had been invited to get their Covid vaccination in the town’s Victoria Hall but many thought it unsafe to leave the house.

Twenty Perthshire primary schools and nurseries closed and were unable to accommodate the children of key workers.

One Dunblane resident said: ‘We feel we have been cut off. There’s almost a foot of snow here. The only traffic moving on our street are the sledges.’

Traffic Scotland warned drivers of ‘difficult driving conditions’ on the A82 between Tyndrum and Bridge of Orchy. An accident on the M9 closed the Friarton Bridge, with traffic being diverted through Perth.

Chief Superintendent Louise Blakelock said: ‘Government restrictions on travelling remain in place across Scotland because of the ongoing pandemic.

‘People should not leave their homes unless for essential purposes and work from home where possible. The best way to stay safe is to stay at home.

‘In the current wintry weather please consider if your journey is exempt under the regulations and also if it really is essential and whether you can delay it until the weather improves.’ 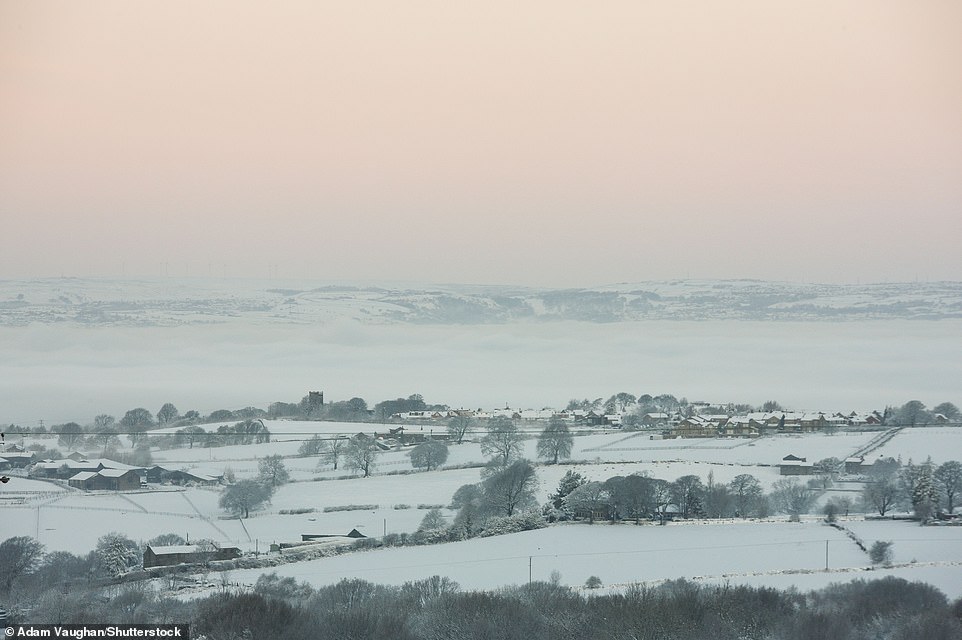 The North has borne the brunt of heavy snowfall so far this week – but the wintry weather is set to hit the Home Counties today. Pictured: West Yorkshire yesterday 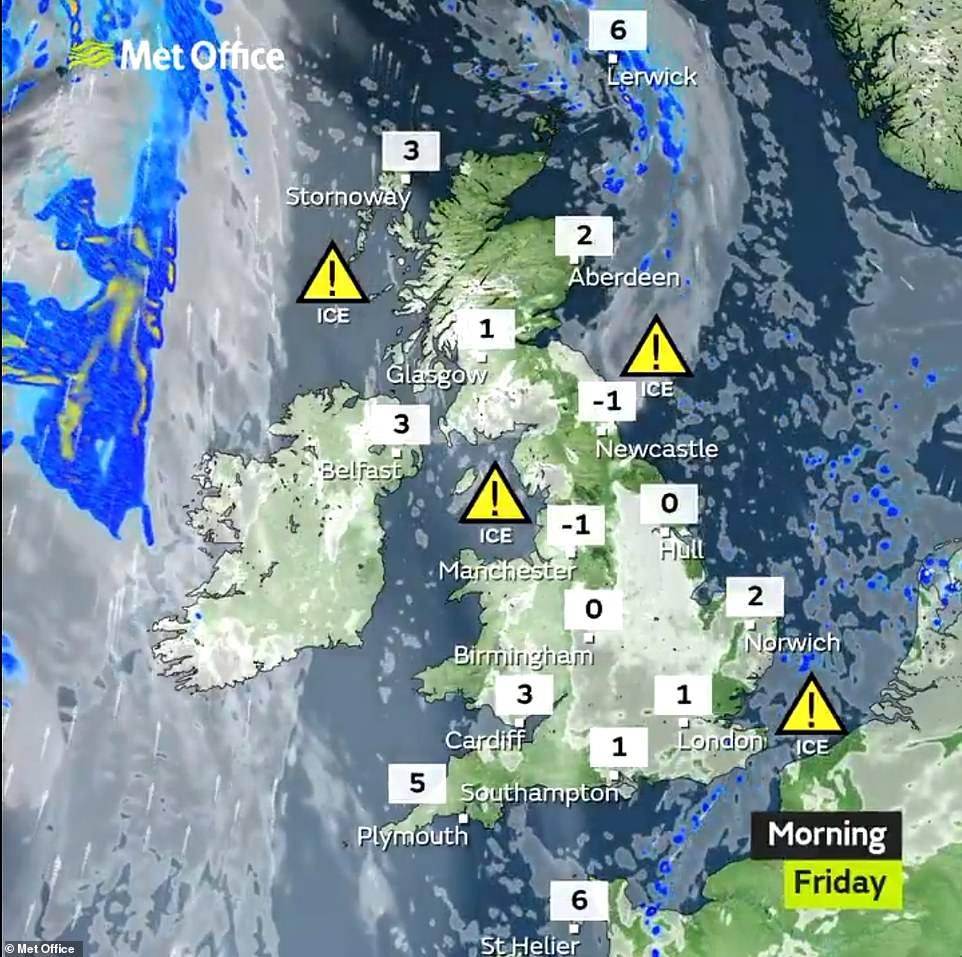 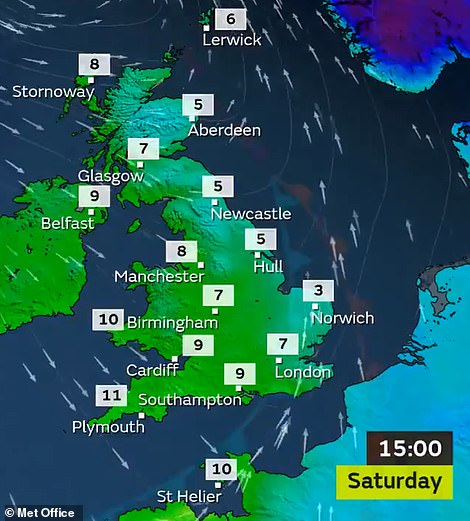 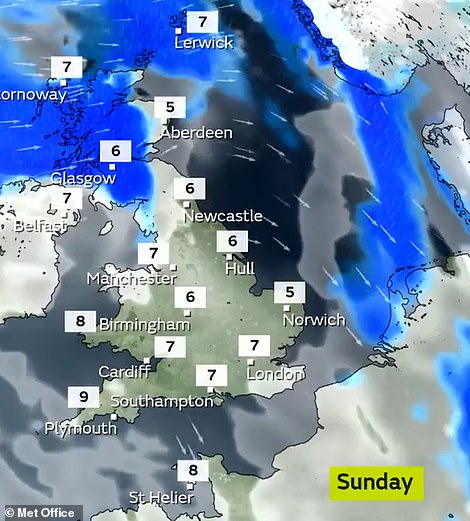 After the latest weather front passes, Atlantic-dominated weather will become established, bringing moister and warmer air with rain dominating. This will confine snowfall to the highest elevations in the north.

Nick Silkstone, deputy chief meteorologist, said: ‘During Monday and Tuesday we will see large rainfall totals across the high ground of western Britain. This rainfall combined with snowmelt will lead to a high volume of water moving through river catchments in these regions.’

During Wednesday, an area of low-pressure anchored in the North Sea will establish a northerly air flow coming into the UK, heralding a return to colder conditions, with wintry showers over higher ground.

Those fearing a return of the Beast from the East – the Siberian weather system that brought heavy snow in February and March 2018 – can rest easy after the Met Office said it is unlikely to roar back in the coming weeks.

A group of residents in snow-bound Yorkshire have spread a bit of joy by building a 10ft tall snowman near their homes.

Gemma Younger, 34, and her neighbours spent three hours building the ‘tallest snowman’ she’d ever seen in their shared garden yesterday. The snowman, which was the first she had ever built, made her feel like she was ‘reliving her youth’.

A team of five people, including her neighbours Dawn, Darren and Jack Roberts, as well as her son Alfie, ten, moulded the snowman limb by limb in a joint effort in Catterick, North Yorkshire.

Jack, who is 6ft 3in, was tasked with completing the snowman’s head and was hoisted up in the air by his mother who held a small step ladder by the base of the snowman. 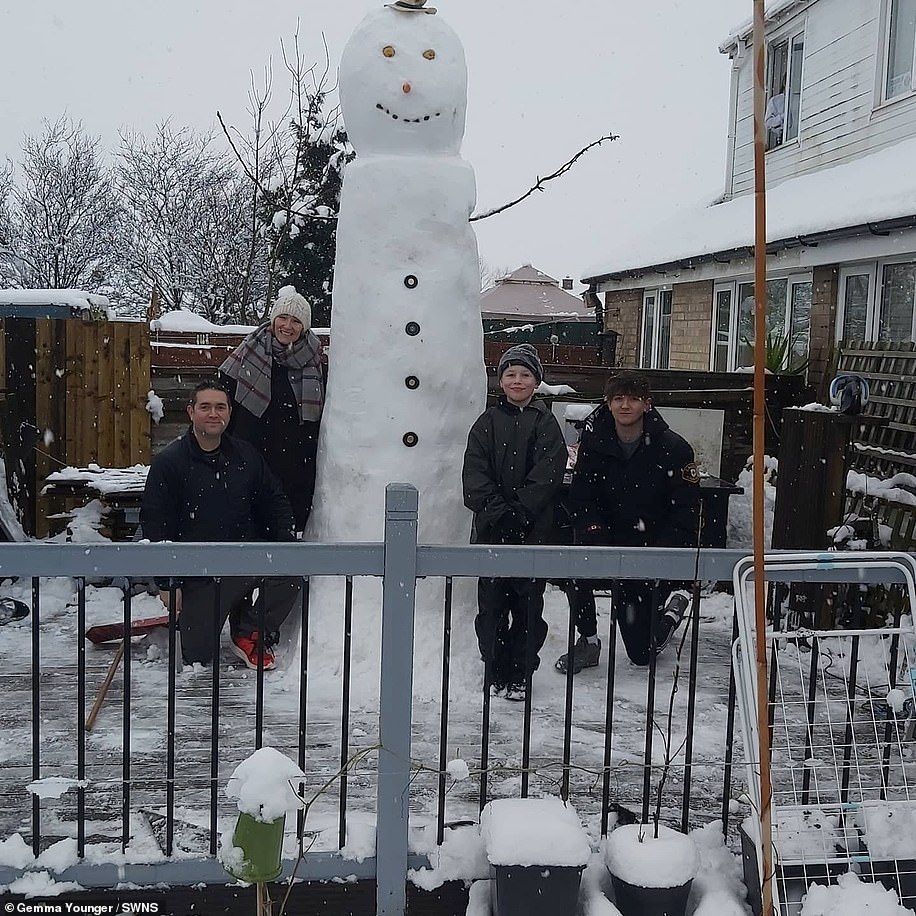 The friendly neighbours wore masks and maintained a 6ft (2m) distance between them at all times to comply with social distancing measures. Ms Younger said Alfie played in the snow for the whole day, from 9am until 6pm.

Ms Younger, who is originally from Brighton, said: ‘We saw the snow once we woke up, my son was straight out the doors making snowmen. My neighbour was clearing the path and my son started launching snowballs, as you do.

‘He said he was going to make a snowman, if we could help we were more than welcome to. It was challenging but fun. It was a team effort. It was just reliving our youths. It’s the first snowman I’ve ever made.’

The hotel barmaid and married mother-of-two said: ‘There was so much snow, that’s all just from our back garden. Down south we never had snow like this, but moving up north I’ve seen more snow in three years than I’ve ever seen.

‘It’s the most snow they’ve ever seen. My son didn’t come back in until 6pm, he was just playing with the snow all day. It was just a good laugh. We used a tape measure and he’s about 10ft tall. It’s the tallest snowman I’ve ever seen it.’