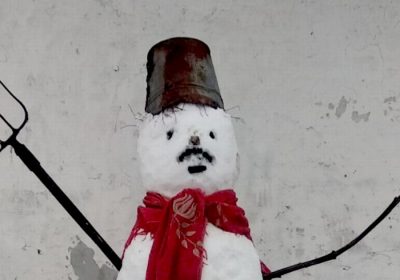 The power-mad regime in Belarus has ordered a man to be arrested after claiming a snowman represented an "unauthorised protest".

Police are seeking a 58-year-old man after he decorated the snowman with the phrase "Long Live Belarus", a motto popular with protests against the Belarusian dictator Alexander Lukashenko.

Now the man, who has asked for his identity to be withheld, could be jailed if he cannot pay the fine of 1,450 Belarusian rubles – equivalent to £415, or five months' pension in the local area.

Human rights activist Leanid Sudalenka said the snowman was erected in a village about 20km outside the southeastern city of Gomel, the second most populated city in Belarus after the capital Minsk.

Mr Sudalenka said: "When the snowman was done, he wrote 'Long Live Belarus!' at the bottom with his finger.

"A few days later, when the snowman was melting because the heat had started, a policeman called the man and drew up a report against him for unauthorised picketing."

Authoritarian leader Lukashenko is often referred to as Europe's last dictator. He has been Belarus's only president since the establishment of the office in July 1994 after the dissolution of the Soviet Union.

The elections are not considered free and impartial and in last year's vote he was re-elected for a sixth term with an implausible 80% of the vote.

This is despite opponents rallying round a single candidate in Sviatlana Tsikhanouskaya.

The contest was marred by accusations of widespread electoral fraud and sparked nationwide protests against Lukashenko which have continued into 2021.

He said: "A strong government, for which 80% of people voted, does not behave like that!

"Of course, the police did not pay attention to such trifles before. But I emphasise that after the election, the tactics of the authorities in this sense have changed.

"Now they cling even to the linen on the balconies, if it has a white-red-white colour.”

If convicted, the protester faces up to 15 days in jail or the maximum fine.