‘It seems he wasn’t the crazy man’: South Koreans marvel at hearing Kim speak off-script and cheer in the street… but North Koreans had no idea what was taking place at the summit

Emotional South Koreans gathered in front of TV-screens to watch the historic meeting between President Moon Jae-In and Kim Jong-Un, but viewers in the North have so far been told nothing about the summit.

The two leaders met in the border village of Panjumon, where they agreed to move towards officially ending the Korean war and denuclerisation of the peninsula, with scenes from their meeting broadcast to jubilant crowds in the South.

North Korean television meanwhile, showed no images from their meeting, and the only information given has so far been that Kim has travelled to Panjumon.

Southern citizens were also heard expressing surprise at hearing the North Korean dictator speak without reading from a script for the first time. 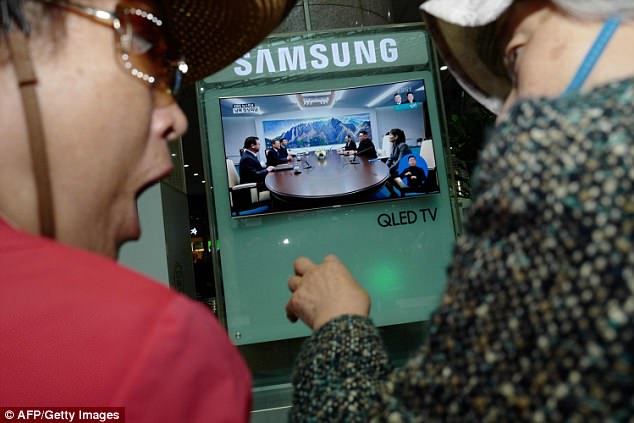 Did you see that?! Two women react to the inter-Korean summit meeting between President Moon Jae-in and Kim Jong Un, at a railway station in Seoul

‘Previously I had heard him read speeches for an hour or two, but today was the first time that I heard him speak.

‘His voice sounded mature, genuine and relaxed, so it seems he wasn’t the crazy man that some have depicted.’

In the capital Seoul, crowds watching a large television screen in front of the city hall cheered and jumped with joy when Kim – whose nuclear and missile tests last year stoked fear of war – crossed the border to shake hands with Moon.

‘I’m filled with emotion,’ said Park Ha-seok, 60, as he watched the pictures being broadcast from the border village of Panmunjom. ‘I don’t expect a big change but this is a start.’ 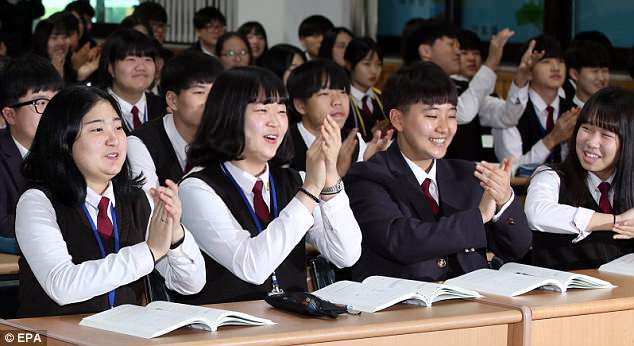 Cheers for Kim and Moon: Students at a Seoul high school clap while watching a live broadcast of the summit at the truce village of Panmunjom 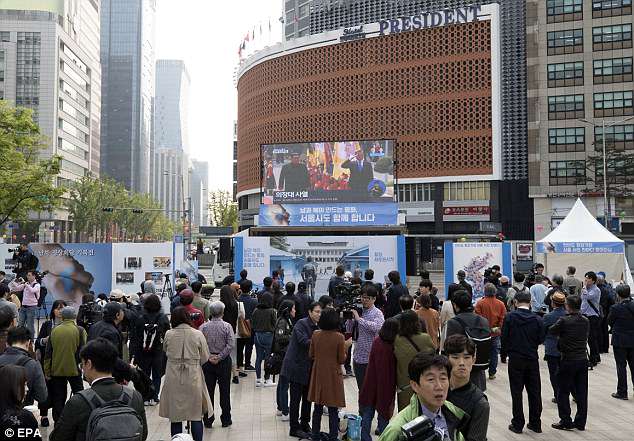 Big show: Citizens watch a TV broadcast of a landmark inter-Korean summit on a giant screen set up at a downtown plaza in Seoul, South Korea 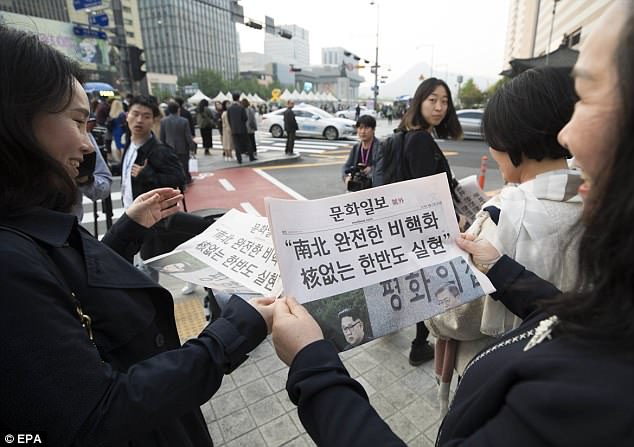 Extra, extra: People read an extra edition of a local newspaper in Seoul, South Korea, which reports that the leaders of South Korea and North Korea have reaffirmed their commitment to the complete denuclearization of the Korean Peninsula 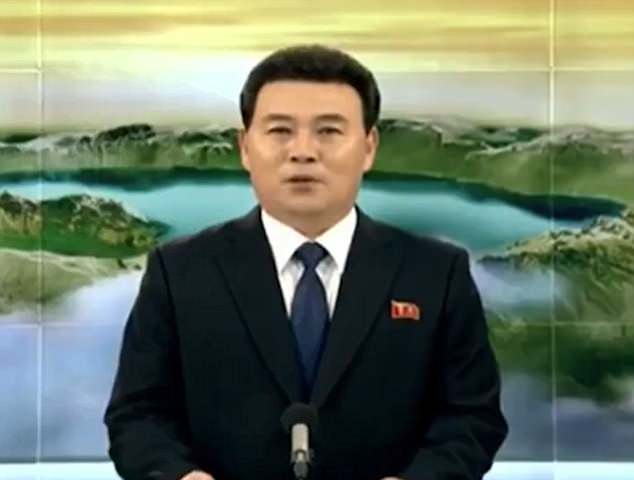 Nothing to see here: Meanwhile, this is the news broadcast shown in the North, with no images from the summit, and they have not been told that Kim Jong-Un has crossed the border

The two sides are technically still at war because the 1950-53 Korean war ended in a truce, not a full peace treaty.

Lee Ji-eun, a 32-year-old doctor and mother of a baby girl, said the pictures had made her unpack an emergency bag she had placed by her front door about six months ago in case of war.

‘The bag has my daughter’s diapers, a portable radio and a gas burner,’ Lee said.

‘Now I find it funny that I told my babysitter to take this bag and my daughter to flee to the basement if there’s war.’ 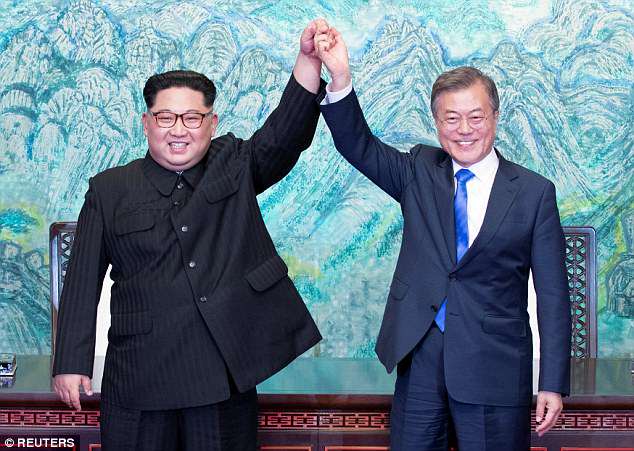 United in action: The President and the North Korean dictator agreed to move towards officially ending the Korean war and de-nuclerisation of the peninsula 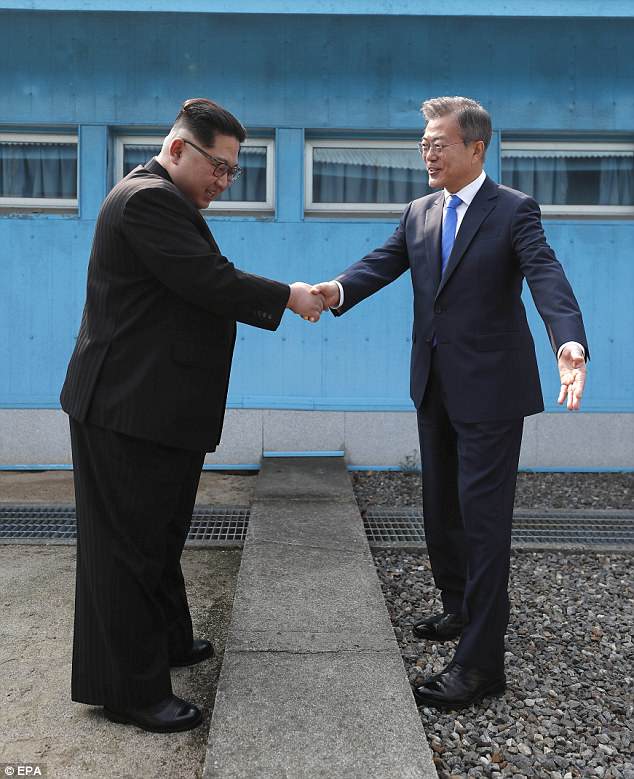 Come over to my side: President Moon holds out his hand to invite Kim to officially cross the border into South Korea 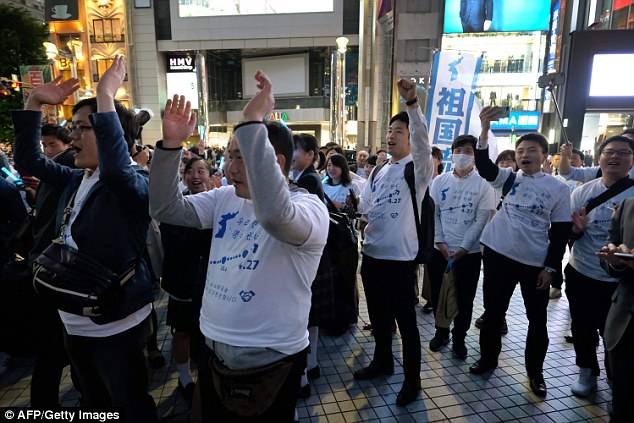 Happy occasion: Korean descendants in Japan, many of those from pro-Pyongyang schools, celebrate the success of the historic summit between North and South Korean leaders 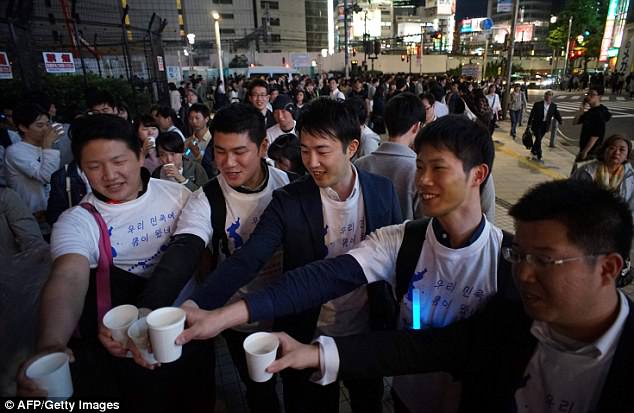 Fisherman Park Tae-won, who lives on a South Korean island just 1.5 km from the maritime boundary with the North, said he hoped the summit would lead to a relaxation of restrictions on going out to sea.

‘Please, we want to go fishing out there as much as we want, without the curfew on fishing only once a day,’ he said.

‘Those who order ‘unification liquor’ will also get a ‘unification pizza’ topped with nuts in the shape of the Korean peninsula for free,’ said Choi, whose father came from North Korea.

‘I plan to run this offer until the day South and North Korea unify,’ he said. ‘I hope I don’t have to run it too long.’