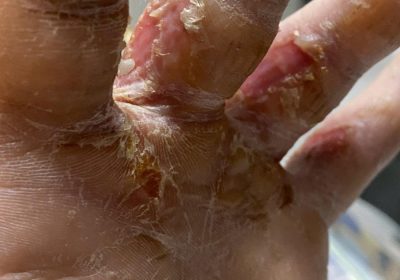 Strangers Stuart Ringwood, 35, and Sam Smith, 29, both chose to celebrate the new year with sparklers from Asteroid Fireworks shop in Norwich, Norfolk.

But after lighting the Yo-Yo sparklers, the skin on their hands started peeling away which dad-of-five, Sam said left his left hand looking like Freddie Krueger from Nightmare on Elm Street.

Stuart, from Little Plumstead, and Sam, from Hethersett, claimed they later found out that the sparklers were recalled from shelves last year for being too dangerous.

Luckily, Stuart has been told he does not require a skin graft for his injuries and is instead treating them and re-dressing them every two days at home.

But Sam does not yet know whether he will be so lucky – as he is still waiting to hear what treatment he will require for his burns.

Stuart, who is also a dad-of-five, said: "I couldn't believe it when I heard that the products had been recalled and had somehow ended up back on the shelves.

"It's just really poor business. You can't even call this a freak accident, because the products had been recalled, but had ended up back on the shelves at this shop."

He went on: "It just exploded in my hand as soon as we lit it. They're Yoyo sparklers, so what they're meant to do is burn down to the bottom and then go back up again and then burn down again.

"But as soon as we lit it, it just went bang. It went off like a firework would."

Stuart added: "The pain was absolutely horrendous. My hand was literally on fire."

A spokesperson for Asteroid Fireworks initially told a local paper that it was an "unfortunate incident" that the sparklers had ended up back on the shelves.

He said to the local paper: "It's a very unfortunate incident indeed – we took them off sale last year and did not order any new ones, so I do not know how they ended up getting them.

"They must have ended up mixed up with our other sparklers and on that, I can only hold my hands up and apologise."

But the same spokesperson denied on Tuesday that the sparklers were officially recalled by the manufacturer.

Only the supplier had advised they be recalled, they said: "The sparklers were not faulty in any way – it must have been a misuse by the people that were using them.

"We sold thousands last year and had no incidents.

"The manufacturer did not officially recall these sparklers – rather, it was the supplier, after an incident at Diwali where the user was not using them correctly.

"Of the sparklers we had in stock, we didn't actually end up selling most of them."