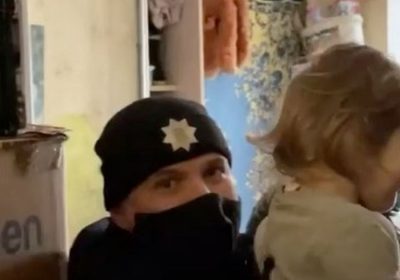 Two neglected children were so hungry they were made by their mum to eat stray dogs to survive, it is claimed.

Masha, aged four, and her two-year-old brother were discovered surrounded by mounds of rubbish in a home in Ukraine.

They reportedly never went outside and the flat, in the city of Kharkiv, was infested with rats and cockroaches.

Their mum Lilia Granenko, 30, is said to have killed stray dogs in the area which she cooked to feed to her children.

The starving youngsters, who also lived with their grandmother, have now been rescued after police raided the property following a tip-off from neighbours. They will be placed in an orphanage until a court decides what to do.

According to reports, the women collected waste from rubbish bins for years which was left strewn around the home.

The toilet had broken in the flat and the siblings were found surrounded by their own excrement.

Yevgeny Zub, a volunteer who captured the police raid on film, added: "The mother, grandmother and the children relieve themselves right on the floor.

"The pooches are being killed in the apartment then cooked and eaten by the family."

Dogs can be heard barking during footage of the raid.

Animal rights activists also arrived on the scene and rescue four dogs, which were found locked in a room.

Witnesses claimed the young boy had did not have any clothes and had to be taken out wearing a reused nappy, before being wrapped in a blanket. The water supply in the property had also been cut off over unpaid bills, it is claimed.

A neighbour said: "Cockroaches fall down from the ceiling in there and the stench makes you retch with disgust."

Granenko was arrested and faces five years in jail if convicted of neglect.

Police said a criminal case for "malicious non-compliance with child-rearing obligations" has been started against her.

She has five children from different men and was previously deprived of parental rights, according to reports.

The mum lost custody of one child to the dad while two others were placed into an orphanage by a court.