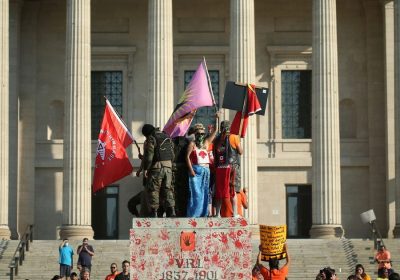 Statues of the Queen, Queen Victoria and Captain Cook have been defiled during protests across Canada in riots on the country's founding national holiday.

Sculptures of Queen Elizabeth II and her great-great grandmother in Winnipeg, Canada, were toppled, smeared with red paint and seemingly strangled with Mohawk flags.

Protester group 'Idle No More' have campaigned for Canada Day to be cancelled under the belief that the celebration neglects a reflection on the way historical governments have treated indigenous peoples.

The riots were heightened by the recent discovery of a number of mass graves containing around 1,000 indigenous children, prompting chants such as "no to genocide" and "bring her down", reports MailOnline.

The graves are a result of the 19th and the early-20th century campaigns to convert around 150,000 Canadian children to Christianity by forcing them to drop their original names and native languages while being sent to Catholic schools.

It is believed that up to 6,000 children died in this brutal and frequently physically abusive process.

In a circumstance similar to the UK's BLM riots of summer 2020, the Queen Victoria statue in Winnipeg was hauled down amidst a crowd eager to see the figure fall before the danced and waved Canadian indigenous flags.

Meanwhile, in Victoria, British Columbia, a statue of Captain Cook was pulled down and then discarded in a harbour in a similar fashion to the disposal of the Edward Colston statue in Bristol last year.

Cook's statue was replaced by a red wooden dress, which is a symbol to acknowledge missing and murdered indigenous women.

Ten churches and another statue of Queen Victoria were amongst other public works that were vandalised and painted red in the riots.

Canadian Prime Minister Justin Trudeau has said he was 'terribly saddened' by the discovery of Marieval Indian Residential School which is one site in a collection of historic schools where anonymous graves have been found.

Trudeau has previously urged Canada to take responsibility for the "hurt and trauma" its indigenous people have endured. Many remain critical of his support for indigenous rights in light of his past participation in "blackface".