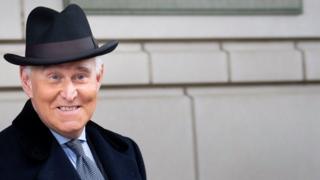 A US prosecutor will tell Congress that Department of Justice (DOJ) officials inappropriately tried to reduce punishment for Trump aide Roger Stone.

According to a prepared copy of the testimony, Aaron Zelinsky will say that “political considerations” led top DOJ officials to seek a lesser sentence.

A judge sentenced Stone to 40 months after the DOJ lowered their recommended sentence following a tweet by Mr Trump.

All four prosecutors quit the case after the lower sentence was requested.

Mr Zelinsky, an assistant US attorney in Maryland who previously worked on special counsel Robert Mueller’s Russia meddling probe, will tell lawmakers on the Democratic-controlled House of Representatives Judiciary Committee that he felt “heavy pressure from the highest levels of the Department of Justice to cut Stone a break”.

He will say that he felt required to treat Stone “differently and more leniently” because of his “relationship with the president”.

“Mr Zelinksy’s allegations concerning the US Attorney’s motivation are based on his own interpretation of events and hearsay (at best), not first-hand knowledge,” she said in a statement.

What is the background?

Stone was found guilty in 2019 of lying to the House Intelligence Committee about his attempts to contact Wikileaks, the website that released damaging emails about Mr Trump’s 2016 Democratic election rival Hillary Clinton, as well as of obstruction and witness tampering.

Prosecutors, including Mr Zelinsky, asked a judge to jail him for at least seven years, but after Mr Trump took to Twitter to call the sentencing guideline “horrible and very unfair” and a “miscarriage of justice” Mr Barr stepped in and asked for a more lenient sentence.

Since then, Mr Trump has hinted at a possible pardon for his long-time confidant.

Stone is due to begin his sentence on 30 June, but on Sunday took to Facebook to say he would attempt “to delay the death sentence ordering me to a Covid-19 infested prison”.

What else will prosecutors say?

According to his prepared statement, Mr Zelinsky will say he was pressured to change a sentencing memo to the judge to ask for a lighter sentence for Stone.

“Ultimately, we refused to modify our memorandum to ask for a substantially lower sentence,” he will say.

“Again, I was told that the US Attorney’s instructions had nothing to do with Mr Stone, the facts of the case, the law, or Department policy.

“Instead, I was explicitly told that the motivation for changing the sentencing memo was political, and because the US Attorney was ‘afraid of the President’.”

Mr Zelinksy will be joined at the hearing by John Elias, an official in the DOJ’s antitrust division, who will say that Mr Barr directed his team to investigate a legal marijuana business in California because he “did not like the nature of their underlying business”, according to his prepared opening remarks.

He will also say that he was directed to investigate an environmental deal made between US auto manufacturers and the state of California after Mr Trump criticised it on Twitter.