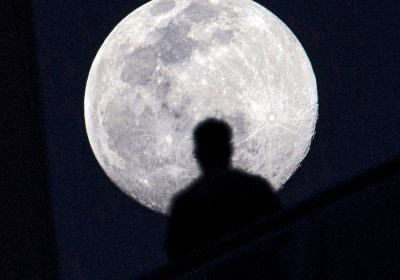 A "Worm Moon" will light up the skies from Sunday night, but the Daily Star is not sure about its name.

The world is divided over what the natural phenomenon should be called and we want you to end the debate once and for all.

Native Americans have long-said the first full moon in March marks the beginning of spring.

One group named it the Worm Moon after the worm trails that become visible on the newly-thawed ground.

But other tribes and religious leaders say that's nonsense, with space nerds rowing over whether it's a Supermoon or not.

Prof Bill Leatherbarrow, director of the British Astronomical Association’s Lunar Section, says: “The problem is that each month’s full Moon seems to have some kind of name attached to it, usually drawn from different cultures.

“It’s all relative, and there is no scientific rationale or objective authority on which to base the names.”

An online poll ended in disaster when Boaty McBoatface was voted the top name for a British research ship in 2016.

It was dubbed Sir Attenborough instead — but we won't do that to you.

What should the Worm Moon be called?

Brits will be able to see the bright full moon for the next couple of days.

Some scientists say it should be classed as a Supermoon as it'll appear brighter and bigger in the sky.

But others disagree saying it's not in the same league as the ones in April and May.

Other names for the natural phenomenon are the Crow Moon, harking back to when the cawing of crows signaled the end of winter.

The Crust Moon, for when snow cover becomes crusted from thawing by day and freezing by night and the Sap (or Sugar) Moon as this is the time for tapping maple trees.

Christians have used it to calculate the date of Easter, calling it the Paschal Moon in the western ecclesiastical calendar.

The Hebrew calendar dubs it the Pesach or Passover moon while Muslims prefer Shab-e-Barat, Bara'at Night or Mid-Sha'ban – marking the middle of the month before Ramadan.

Hindus call it the Holi Festival Moon and Buddhists take a day off for it in Sri Lanka, where it's known as Medin or Madin Poya.

A full moon is called a Supermoon when its orbit takes it close to the Earth causing it to appear brighter and bigger than normal.

In the UK, this will happen at 7.48pm on Sunday but the effect will stay with us for a couple of days.