Sydney is on track to mark its hottest temperature in 331 days on Wednesday afternoon before a dangerous storm makes its way to the harbour city to send temperatures plummeting.

Maximum temperatures have stayed below 30 degrees since February 21 last year – a streak only bested by a 339-day record set in 1883.

Sydney’s Observatory Hill recorded 27.8 degrees at 11am on Wednesday and is finally set to crack the 30-degree mark between 3pm and 4pm.

Both Cessnock and Campbelltown are forecast to reach 35 degrees by the end of the day.

Sydney’s long cool streak has been the result of a year filled with cloud cover along with ideal, cooler wind directions. The city has experienced predominantly easterly winds over the last year, bringing cooler, moist air from the ocean.

On Wednesday, however, a trough is coming in from the north, bringing northerly, hot winds off the land to the city in an event we have not seen in almost a year. 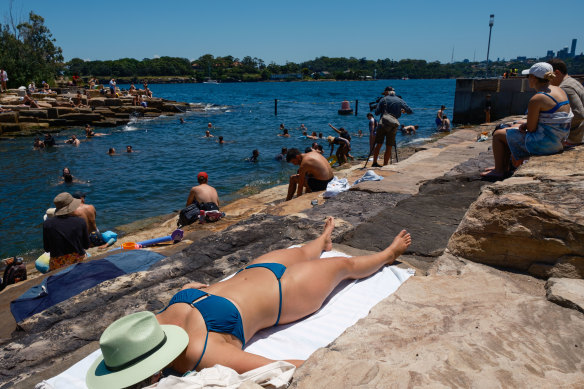 Sydney’s hot temperatures on Wednesday are set to be short-lived.Credit:Oscar Colman

Weatherzone meteorologist James Rout warned the hot weather is set to be short-lived. Major storms are to arrive in Sydney as early as 7pm, bringing with them major rainfall and strong, dangerous winds.

“The main thing today is nasty storms are set to come through this evening. They will reach the south-west and the west first in the afternoon, reaching the city by about 7 or 8pm and will continue through the night,” he said.

With them, the storms are set to bring through a southerly buster that will push down temperatures to the low 20s overnight. Thursday is forecast to reach a maximum of just 23 degrees for Sydney.

Rout said the thunderstorms are set to bring 20-30 millimetres of rain overnight to Sydney and could even bring 50-60mm to isolated areas.

Wind gusts of up to 90km/h are also forecast overnight with average winds of 60-70km/h set to hit Sydney’s coastline on Thursday morning.

“These storms are going to be particularly dangerous with heavy rainfall and strong winds,” he said.

The Bureau of Meteorology has already issued a strong wind warning and Sydney Enclosed Waters, Macquarie Coast, Hunter Coast, Sydney Coast, Illawarra Coast, Batemans Coast and the Eden Coast are all on high alert for Thursday.