Amman: The Syrian army and allied forces made advances in the south-west that bring it closer to the Israeli-occupied Golan Heights as rebels refusing to return to state rule boarded buses for opposition controlled northern Syria, state television and rebels said.

The army, backed by a Russian air campaign, has been pushing into the edges of Quneitra province following an offensive last month that routed rebels in adjoining Deraa province who were once backed by the US, Jordan and Gulf states. 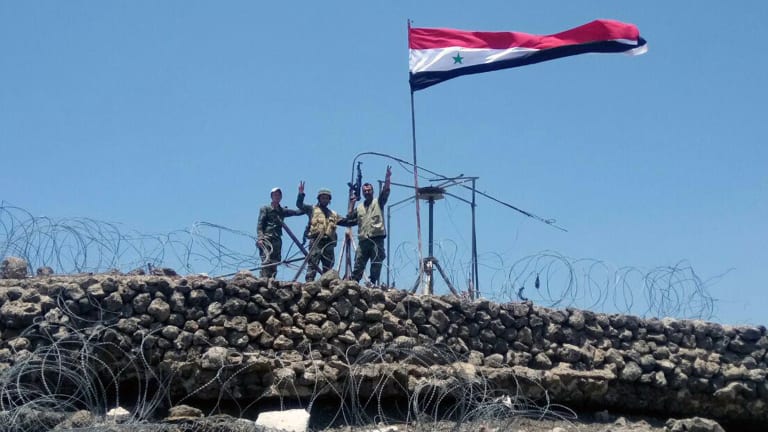 Syrian troops flash the victory sign next to the Syrian flag in Tell al-Haara, the highest hill in the south-western Daraa province, earlier this week.

The offensive has restored Syrian government control over a swathe of the south-west, strategic territory at the borders with Jordan and Israel.

The capture of a string of villages, announced by the army on Saturday, comes as evacuation of rebels and their families resumed for the second day from villages along the Golan frontier towards rebel-controlled northern Syria.

"We are in a bus with around 60 people, young men and families, and about to leave and become uprooted from our homes," said Maher Ali, 38, an activist who decided with his family to leave rather than risk retribution for his long record of peaceful opposition to President Bashar al Assad's authoritarian rule.

The army was consolidating its control of a series of commanding heights that overlook the Golan frontier that had allowed mainly Islamist rebels who once controlled it a strong position in the sensitive border area.

A deal negotiated by Russian officers with rebels in the Quneitra area last week allows safe passage to rebels opposed to a return to state rule, while offering others who decide to stay Russian guarantees against army encroachments in their own localities, rebels say.

It also allows the return of Syrian army brigades, that existed before the 2011 conflict, back to where they were stationed near a 1974 demilitarised zone with Israel on the Golan frontier.

More than 2500 people, among them fighters from Islamist groups who have rejected the deal, left on Friday headed to opposition areas in northern Syria.

Russia's Interfax news agency, citing the Russian military, confirmed the same number have been taken by bus to the Idlib zone. The Syrian army wants full control over Quneitra province, where Israel has deep concerns over the presence of Iranian backed militias in the so called Triangle of Death area. The area is a bastion of Iranian-backed militias including Hezbollah, according to Western intelligence sources.

Israel signalled it would not impede the Syrian army presence in Quneitra as long as it steered away from the demilitarised zone, and said it will continue to escalate attacks along its frontier and elsewhere in Syria where it suspects Iranian-backed forces are stationed.

A commander in the regional alliance that backs Assad said the army's victory in south-western Syria forced Israel to accept the Syrian army's return to the old 1974 armistice lines.

"The Israelis have been forced into submission … the file of the south has ended in favour of the Syrian army," the commander said, saying Quneitra's complete recapture was expected in the coming days.

Some rebels say Russia, which led the military campaign and negotiated most of the surrender deals and committed military police to oversee its implementation, has been trying to push back the army and its Iranian-backed militias from committing excesses in former rebel-held towns.

Other phases of the agreement, which includes the handover of weapons and the entry of Russian military police to some villages, were expected to be implemented in the coming days, a rebel source said.

Tens of thousands of people have been sheltering at the frontier since the Russian and Syrian aerial bombing campaign that the opposition called a scorched earth policy began a month ago.

Russia has been exerting pressure on the Syrian army to facilitate the return of many of the displaced and has also asked the United Nations to send regular convoys of aid to ease the humanitarian crisis triggered by the offensive, UN officials said.

A senior Western diplomatic source said Moscow, which has reached understandings with Israel and Jordan that made it possible to move on with the offensive, was keen to stabilise the border area to prove that its Syria intervention sought a political settlement to the seven-year-old conflict.