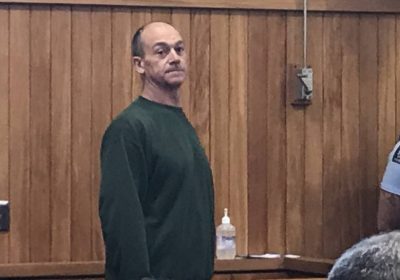 A man facing charges after a boat-rage incident at Tairua has abandoned an attempt to keep his name secret and has now been freed on strict bail conditions.

John Frederick Dixon reappeared in the Thames District Court this morning when, through his lawyer Peter Eastwood, he entered not guilty pleas to three charges in relation to an incident at Tairua on January 23.

The 58-year-old is defending charges of using a vessel as a weapon to collide with another vessel, operating a vessel in a dangerous manner and assaulting Catherine Maree Browning.

A video of the incident in the small Coromandel town was shared widely on social media and has also led to Browning being charged and brought before the court. She has applied for diversion and will reappear in court next month.

Eastwood told Judge Stephen Clark that the Parole Board had agreed that Dixon could be released from custody, though he would be subject to conditions.

Police also had four conditions which Dixon agreed to in order to be granted bail in court today.

They are that he must reside at his Tairua home, abide by a 7pm to 7am curfew, to not associate or communicate with Browning and to not offer violence.

Despite the not-guilty pleas, Eastwood told Judge Clark that he was hopeful of a resolution of the charges with police.

He sought a three-week adjournment to allow further discussions.

After reading Dixon his police bail conditions, Judge Clark granted him bail and remanded him to reappear for a case review hearing next month.