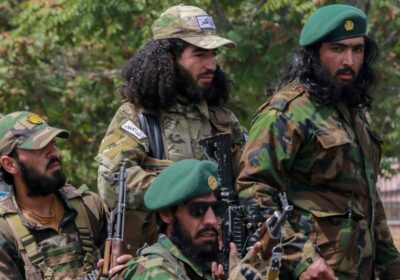 Nine men were publicly lashed in an Afghanistan sports stadium at the orders of the nation's new rulers, a Taliban official said.

Haji Zaid, a spokesman for the governor's office in southern Kandahar province, revealed each man received between 35 and 39 lashings as a punishment for crimes they had been accused of, the details of which have not been disclosed.

The incident took place in Afghanistan's capital of Kandahar in front of Taliban officials, religious clerics, elders, and local people, the Mirror reported.

READ MORE: Mum and daughter, 4, killed in horror car crash as they were 'walking to nursery'

This is the latest in a series of displays of the drastic changes to daily life that have gripped Afghanistan since the Taliban resumed control.

A similar incident at the end of November saw fourteen more people publicly lashed in another football stadium in eastern Afghanistan.

Afghan citizens were invited by the Taliban to witness the violent punishment for the first time since the 1990s.

In December, the Taliban also carried out its first public execution since its return to power in 2021 in the western Farah province where hundreds of spectators gathered to watch the capital punishment.

The Taliban last had control of the country in the late 1990s, when public executions, stonings and lashings were regular occurrences.

The regime is known for its totalitarian interpretation of Islamic Sharia law, which has been particularly oppressive to women.

One of two female politicians who remained in Afghanistan after the Taliban resumed power was murdered at her home on Sunday (January 15), Afghan police stated.

Mursal Nabizada, 32, who had been an MP in the former US-backed government from 2018 until August 2021, when the group resumed power, was shot dead on the first floor of her Kabul home alongside her bodyguard after she refused to leave Afghanistan, even in the face of vile death threats.

Nabizada's brother and another bodyguard were also wounded in the attack.

For more shocking stories from the Daily Star, make sure you sign up to one of our newsletters here.