A Thai minister once jailed for conspiring to smuggle heroin into Australia is facing censure for lying to the country’s Parliament about revelations of his criminal past.

Government enforcer Thammanat Prompao, who pleaded guilty to a heroin trafficking charge in Sydney in 1993, is among six Thai MPs facing a week-long censure motion. 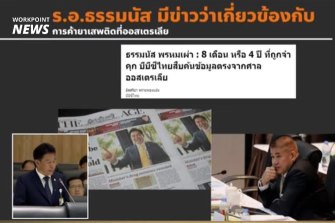 The Age’s front page from September 9 is shown during Wednesday’s censure debate against embattled Thai minister Thammanat Prompao, right, in Parliament in Bangkok.Credit:Facebook

The opposition accuses Thammanat of being ineligible to be a cabinet minister because of his criminal record, and says he misled Parliament by lying about the case after the Sydney Morning Herald and Age published stories in September detailing his drug-trafficking conviction.

At the height of the lengthy censure debate, Thammanat attempted to block the admission of Australian court documents which in part formed the basis of the Herald and Age’s reports.

He argued that accepting an Australian court's decision as proof of his unfitness for office would be tantamount to Thailand becoming a colony.

Government members prevented some evidence from being presented. But political opponents released the documents online anyway, including a full translation into Thai of the NSW Court of Criminal Appeal's final ruling detailing that Thammanat had “participated in the delivery of heroin” to two co-accused. 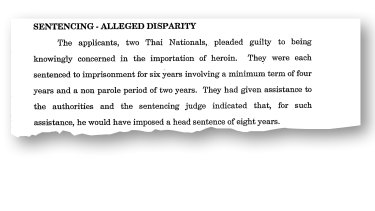 Details from the NSW Court of Criminal Appeal judgment dismissing an appeal on sentence severity by Manat Bophlom and Sorasat Tiemtad.Credit:CCA

Thammanat was named Manat Bophlom when he pleaded guilty in Sydney to conspiracy to import a commercial quantity of heroin in 1993, was handed a six-year maximum sentence and was deported on release from Parklea prison after four years.

On return to Thailand he changed his name to Pachara Prompao, under which he won a promotion in the army before being accused of murder; he was acquitted after three years in custody.

While awaiting sentencing he told Australian police he had worked as a spy for the Thai government under the name Yuthaphum Bophlom; that name also appears in Thursday's tranche of documents.

If a majority of the lower house finds in favour of the motion, Thammanat will be removed from office. This is considered unlikely because the fractious opposition was last week dealt a blow with the Constitutional Court dissolving the Future Forward Party, resulting in the removal of 10 MPs, over a loan scandal. Party leaders have criticised Friday's ruling as being politically motivated and designed to impede the motion.

Should the Prime Minister be censured, the cabinet would be ruled ineligible.

Students at universities around Thailand have staged protests during the week, bearing placards denouncing the Prayut administration and showing support for Future Forward. The party's leaders have urged supporters to hold off street demonstrations until the censure motion reaches a vote.

The government boasts 263 seats in the 500-seat Parliament which has been reduced to 487, but relies on minor parties for more than 100 votes.