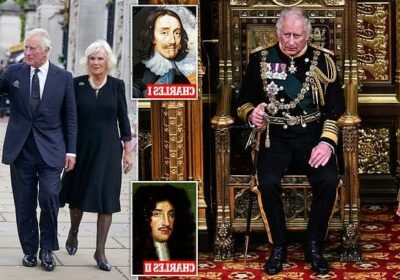 The Carolean age returns: How the Elizabethan era ends as Britain comes under the reign of the THIRD King Charles – after his predecessors who ruled through the Civil War, Great Fire of London and the plague

The new reign of King Charles marks the first time in more than 200 years that a monarch with his name has sat on the throne, after the 70-year second Elizabethan age finally ended with the death of the Queen yesterday.

Prime Minister Liz Truss noted in her House of Commons tribute speech to the Queen today how Charles will take the country forward to a ‘new era of hope and progress, our new Carolean age’.

The term was previously used for the reigns of Charles II, from 1660 to 1685, and his father Charles I, who ruled from 1625 until 1649, when he was executed and the monarchy was temporarily abolished.

The name Carolean originates from the Latin name for Charles, Carolus. The reigns of Charles I and Charles II saw the overthrow and restoration of the monarchy, the Great Fire of London, and the plague.

Charles I was the only British monarch to have been publicly tried and executed for treason, while Charles II – known as the Merry Monarch – spent many years in exile, fathering a dozen illegitimate children by numerous mistresses.

Charles II’s reign also featured the plague and the Great Fire of London. 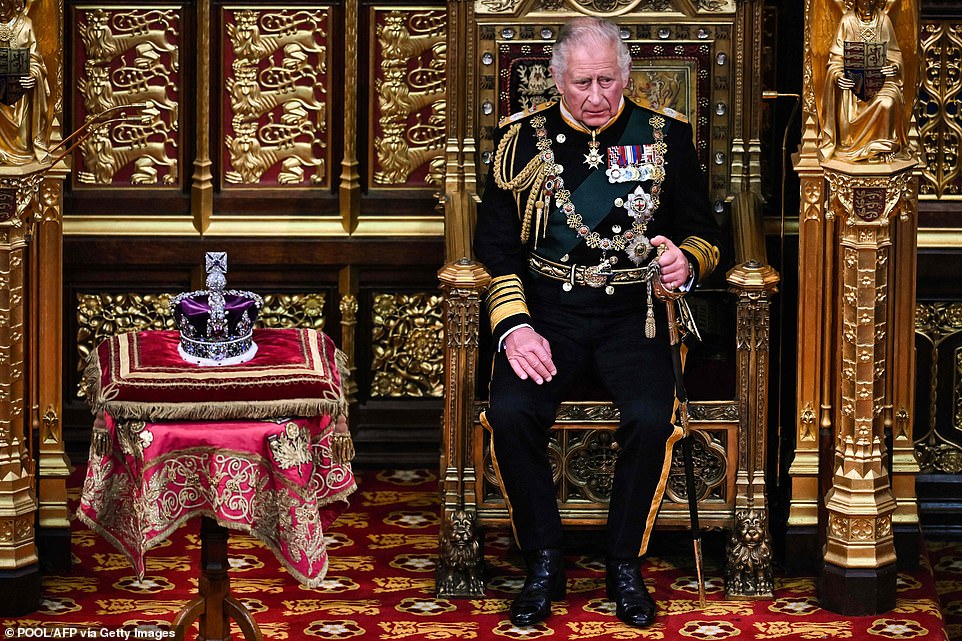 The new reign of King Charles marks the first time in more than 200 years that a monarch with his name has sat on the throne. Above: The then Prince of Wales in the House of Lords during the State Opening of Parliament in May, when he stood in for his mother due to her frailty 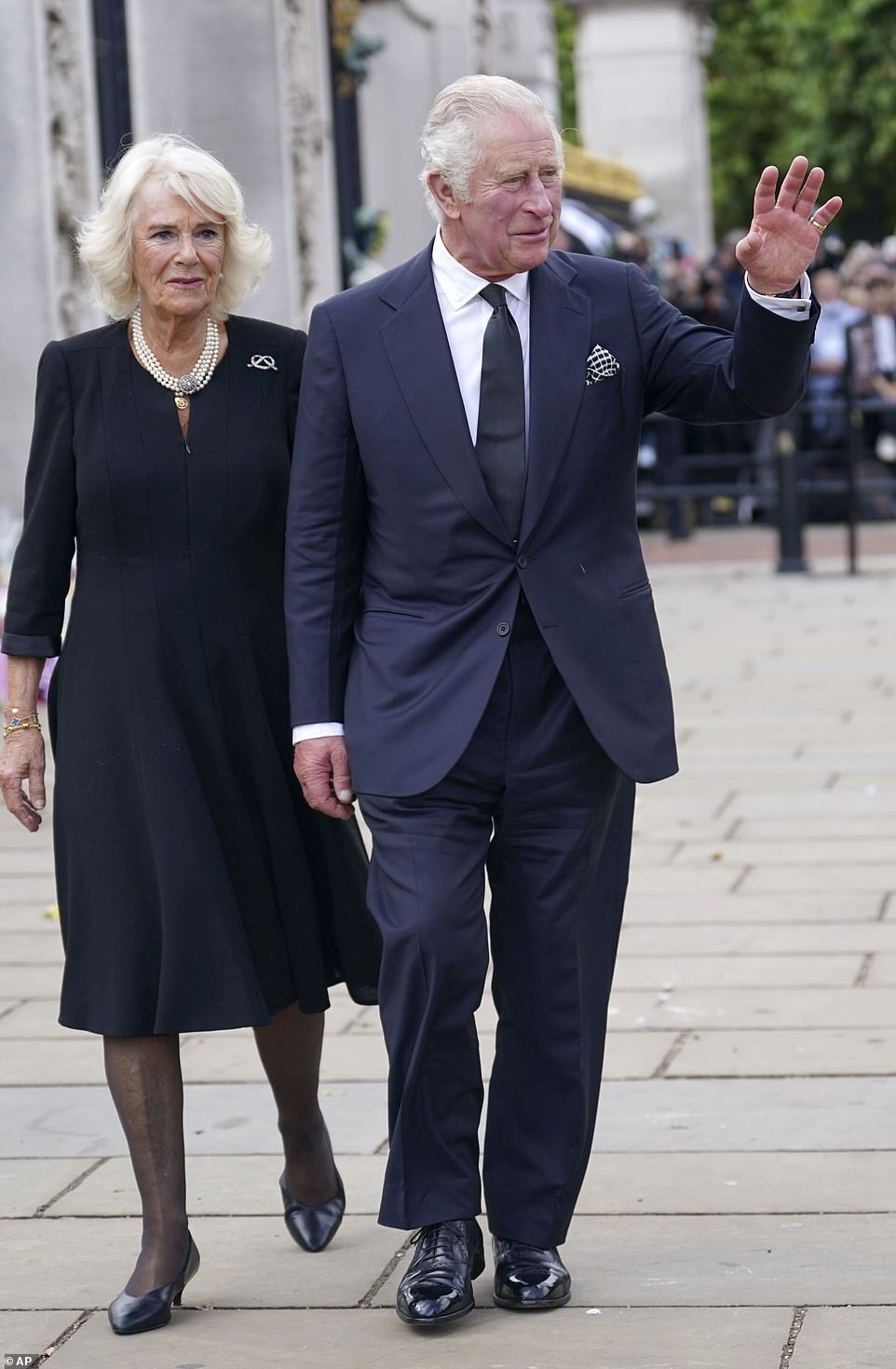 Charles stopped outside Buckingham palace with his wife Camilla, the Queen Consort, to engage with well-wishers today after the death of his mother

Although Charles is Charles III, Bonnie Prince Charlie – The Young Pretender – was known to his supporters as Charles III.

Charles I was an unpopular king whose reign saw the temporary downfall of the monarchy and the establishment of an English republic before it was restored 11 years later.

Born in November 1660, Charles I moved to England from Scotland when his father, King James VI of Scotland, inherited the English throne in 1603. 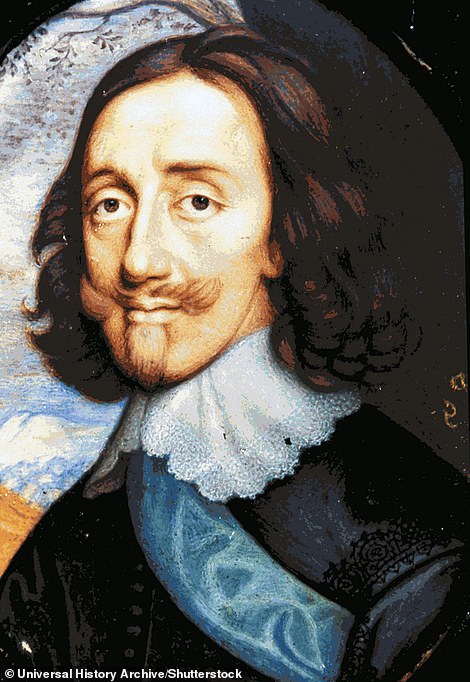 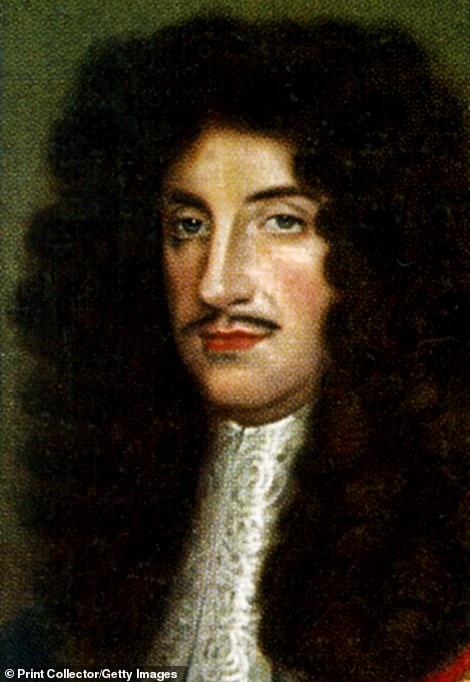 The Carolean age was previously used for the reigns of Charles I, who ruled from 1625 until his execution in 1649, and his son Charles II, who was on the throne from 1660 to 1685 after the monarchy had been restored following its abolition under Oliver Cromwell 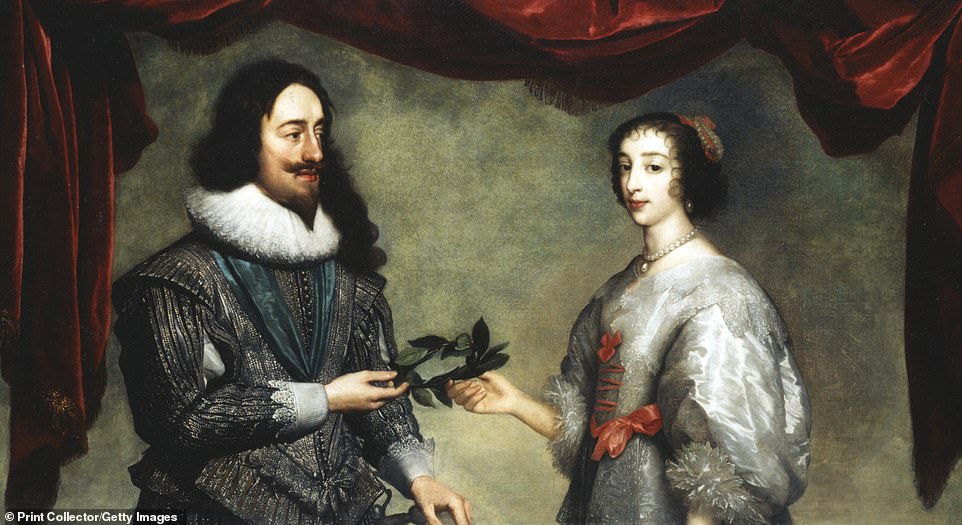 King Charles I was born in Fife, Scotland, in 1600 and became king in 1625 following the death of his older brother Henry 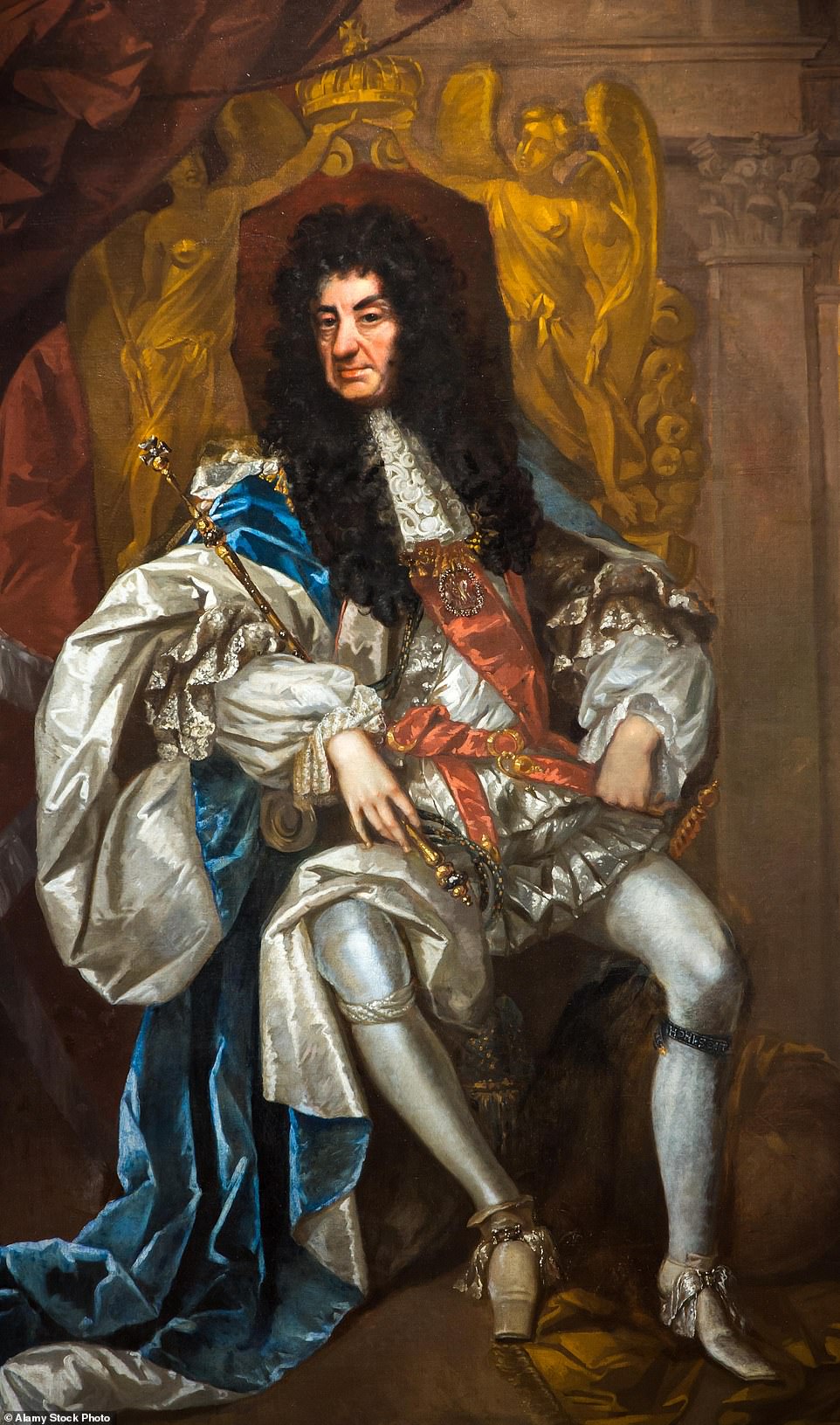 Charles II was born at St James’s Palace on 29 May 1630, eldest surviving son of Charles I, king of England, Scotland and Ireland, and his wife Henrietta Maria, sister of Louis XIII of France

He became heir apparent when his brother, Henry Frederick Prince of Wales, died at the age of 18 in 1612.

God save our gracious King: Words to the national anthem change

The words to the national anthem today changed to ‘God save our gracious King’ with substitutions of ‘him’ and ‘he’ as King Charles III ascended the throne.

This version was last used when the Queen’s father George VI was on the throne.

Usually only the first verse is sung and this will now be: ‘God save our gracious King! Long live our noble King! God save the King! Send him victorious, Happy and glorious, Long to reign over us, God save the King.’

This is a matter of tradition, not law.

Crowds gathered outside of Buckingham Palace today were heard singing God Save the King, as King Charles III arrived at the palace,

As the King shook the hands of those who had gathered to see him return to Buckingham Palace with the Queen Consort, Camilla.

People were heard shouting, ‘God save the King’ before the crowd started singing the anthem.

It is the first time the national anthem will be sung to a king, with the use of ‘he’ and ‘him’ since the death of the Queen’s father, King George VI, in 1952.

He also argued with parliament, which wanted to curb his powers, while many subjects opposed his policies which included levying taxes without parliamentary consent.

Attempts to force the church of Scotland to adopt Anglican practices also led to religious conflicts, which in turn resulted in the strengthening of English and Scottish parliaments, helping to pave the way for his eventual downfall.

Charles I fought the armies of the English and Scottish parliaments but was defeated in 1645 and captured. After a brief period of escape, he was re-captured and executed in Whitehall in 1649 after being tried and convicted of high treason.

His son, Charles II was proclaimed King of Scotland upon the execution and attempted to reclaim England but was defeated by Oliver Cromwell at the Battle of Worcester in 1651 before fleeing to mainland Europe where he spent nine years in exile.

Following Oliver Cromwell’s death in 1658 and the resignation of his son, Richard, the following year, parliament proclaimed Charles II king and invited him to the return to England in 1660.

The following year, in 1666, Charles II and his brother James joined and directed the firefighting effort during the Great Fire of London.

Charles had no legitimate children, but had 12 children by seven mistresses, leading to the nickname ‘Old Rowley’, the name of his favourite racehorse stallion.

The present Dukes of Buccleuch, Richmond, Grafton and St Albans descend from Charles, while Diana, Princess of Wales, was a descendent of two of Charles’s illegitimate sons – the Dukes of Grafton and Richmond.

Diana’s son, Prince William, Duke of Cornwall and Cambridge and heir to the British throne, could be the first British monarch descended from Charles II. 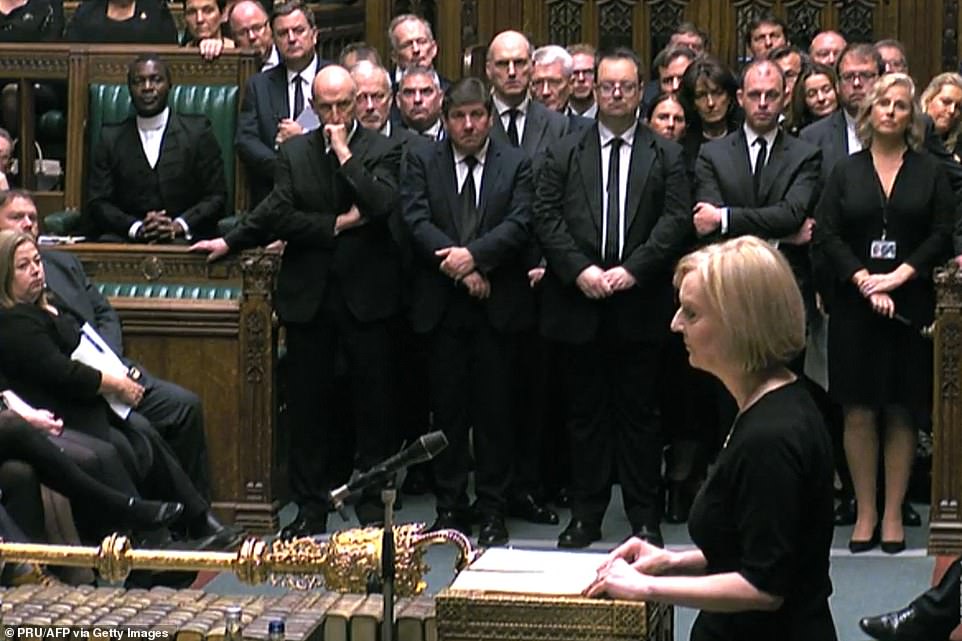 Speaking of Charles, Ms Truss said in her speech in the House of Commons today: ‘All of us in this House will support him as he takes our country forward to a new era of hope and progress. Our new Carolean age. The crown endures. Our nation endures. And in that spirit, I say God save the King’

Stamps bearing the image of the Queen will remain valid following her death, Royal Mail has announced.

Special stamps already announced will still be issued, although there may be changes to when they are launched.

‘These include definitive stamps – regular ‘everyday’ stamps – and special stamps.

‘As previously announced, following the introduction of barcodes to everyday stamps, these stamps remain valid until the end of January 2023.

‘All special stamps that have already been announced will be issued, although the launch dates of some may change.

‘In line with past practice, following the death of a monarch all existing post boxes will remain unchanged.

‘Post boxes already in production or being prepared for installation will also retain the insignia of Queen Elizabeth II.’

The company said a gallery of stamps featuring the Queen is available on its website.

The Royal Mint said it could not give information at this time, when asked about the possible production of new coins.

It had issued a statement on Thursday in which Anne Jessopp, chief executive officer at the Royal Mint, said: ‘On behalf of everyone at the Royal Mint, I would like to extend our heartfelt sympathy to the Royal Family at this extraordinarily sad time.

‘Queen Elizabeth II ruled with heart and devotion, and will be dearly missed by all of us at the Royal Mint and by millions of people around the world.

‘The Royal Mint worked with Her Late Majesty throughout her reign – detailing her journey from new Queen to respected head of state across five coin portraits, and ensuring each new UK coin received her personal seal of approval.

‘The remarkable legacy of Britain’s longest serving monarch will live on for many years to come.’

Speaking of Charles, Ms Truss said in her speech in the House of Commons today: ‘All of us in this House will support him as he takes our country forward to a new era of hope and progress. Our new Carolean age.

‘The crown endures. Our nation endures. And in that spirit, I say God save the King.’

She had earlier told the chamber: ‘On the death of her father King George VI, Winston Churchill said the news had stilled the clatter and traffic of 20th century life in many lands.

‘Now 70 years later in the tumult of the 21st century life has paused again. Her late Majesty Queen Elizabeth II was one of the greatest leaders the world has ever known.’

Ms Truss said the Queen ‘remained determined to carry out her duties’ even at the age of 96, noting: ‘It was just three days ago at Balmoral that she invited me to form a Government and become her 15th prime minister.

‘Again she generously shared with me her deep experience of government, even in those last days.’

Ms Truss said the Queen’s devotion ‘remains an example to us all’ and hailed her for having ‘reinvented the monarchy for the modern age’.

She said: ‘Her late Majesty’s image is an icon for what Britain stands for as a nation, on our coins, on our stamps, and in portraits around the world. Her legacy will endure through the countless people she met, the global history she witnessed, and the lives that she touched.

‘She was loved and admired by people across the United Kingdom and across the world.

‘One of the reasons for that affection was her sheer humanity.

‘She reinvented monarchy for the modern age.

‘She was a champion of freedom and democracy around the world.

‘She was dignified but not distant.

‘She was willing to have fun.’

She added: ‘During her first televised Christmas message in 1957 she said: ‘Today we need a special kind of courage so we can show the world that we are not afraid of the future’. We need that courage now.

‘In an instant yesterday our lives changed forever.

‘Today we show the world that we do not fear what lies ahead.’

On the King, she said: ‘His Majesty King Charles III bears an awesome responsibility that he now carries for all of us.

‘I was grateful to speak to His Majesty last night and offer my condolences.

‘Even as he mourns, his sense of duty and service is clear.

‘He has already made a profound contribution through his work on conservation, education and his tireless diplomacy.

‘We owe him our loyalty and devotion.’

Her words were heard in a crowded but emotionally charged and silent chamber, the green benches populated by MPs dressed in black, as Parliament came together to mark the death of the nation’s longest-reigning monarch.

The Commons and Lords will sit on Friday and Saturday to allow tributes to the Queen. Proceedings will pause at approximately 6pm while Charles makes his address to the nation.

Her speech was met with approval from MPs, with Conservative MP Tom Tugendhat, a Home Office minister, shouting ‘God save the King’ from the side gallery as she finished.