There's a FOX in my kitchen: Couple discover bushy-tailed intruder 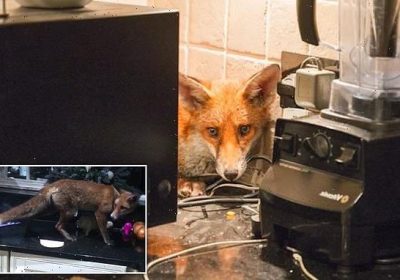 There’s a FOX in my kitchen: Couple discover bushy-tailed intruder hiding behind their microwave

This is the moment a couple discovered a fox in their kitchen after they left their patio doors open in the sweltering heat.

Housewife Karen East woke up at 3am yesterday to find the intruder inside her home in Buckhurst Hill, Essex, after she dozed off on the sofa.

Footage showed the moment her husband took a broom to the fox after it hid behind their microwave. 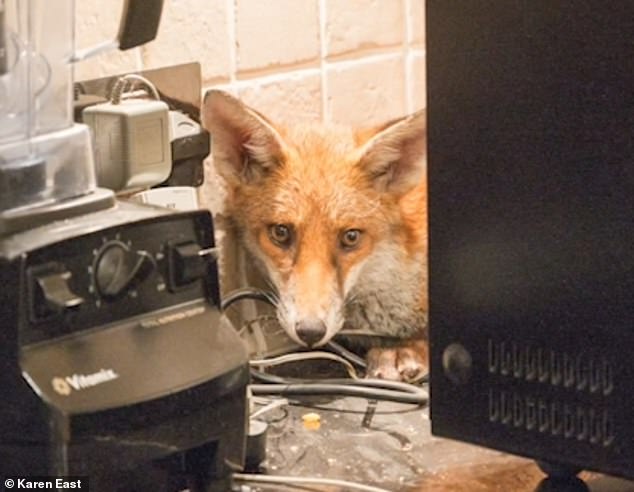 Housewife Karen East woke up at 3am yesterday to a fox in her kitchen (pictured) after falling asleep on the sofa at her home in Buckhurst Hill, Essex

He gently tapped the animal’s bushy tail with the broom, forcing it out of its  makeshift den.

The couple’s house backs onto a school playing fields so foxes are regular visitors to their garden, they said.

But their other animals – two goats, a small pig and five ducks – usually stop the foxes entering their home.

Mr East, who did not want his full name used, said: ‘Normally foxes occasionally come into the garden but we have a few animals which keeps them out.’

The 64-year-old added: ‘Unfortunately there are neighbours that feed the foxes which can encourage them.’ 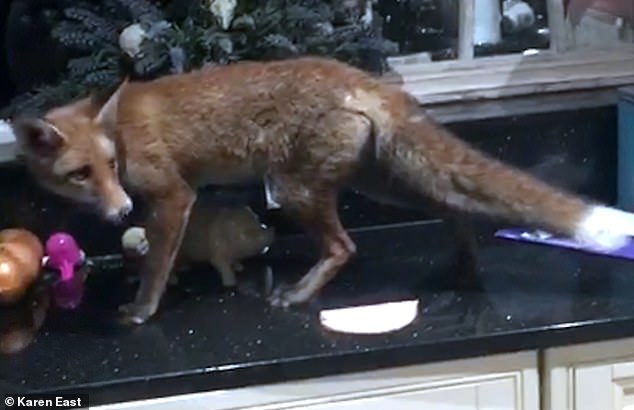 Footage shows the moment Mr East, 64, takes a broom to the fox after it hides behind their microwave

The fox wandered into their home as the couple desperately tried to keep cool amid Britain’s heatwave.

Mr East said: ‘My wife had fallen asleep on sofa and was woken by our dog going mad.

‘That’s when it obviously went behind the microwave. I got it to leave by gently touching its tail with a broom handle.’

The fox did not cause any damage during its visit, Mr East added.

Meanwhile, the UK has been hotter than top holiday destinations such as Marbella, Mykonos and Tenerife this week, with temperatures peaking at 91.4F (33C).