Theresa May wants to throw a party for England’s football team after their World Cup success.

The PM has hailed the success of Gareth Southgate and his squad, who took England to the semi finals in the country’s best run since Italia 1990.

And while their hopes of getting through to the final ended in tears when they lost to Croatia last night, the young squad did far better than anyone had predicted.

The PM today hailed the ‘fantastic’ performance of the team and has said she wants to host a reception for them in recognition of their heroic efforts on the pitch. 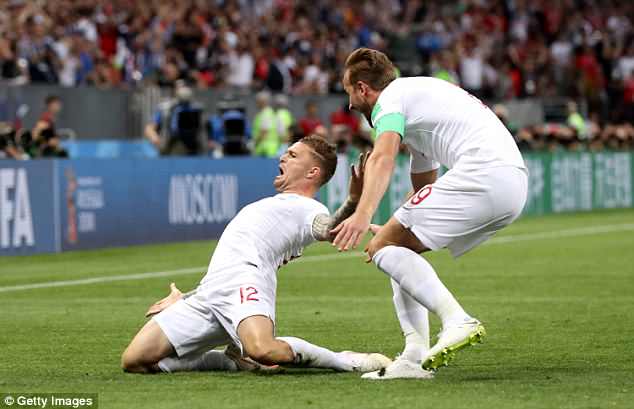 England FC (pictured Kieran Trippier celebrating his goal against Croatia last night) Croatia got to the semi finals of the World Cup in their best run at the tournament for nearly 30 years. The PM wants to throw them a reception to congratulate their success 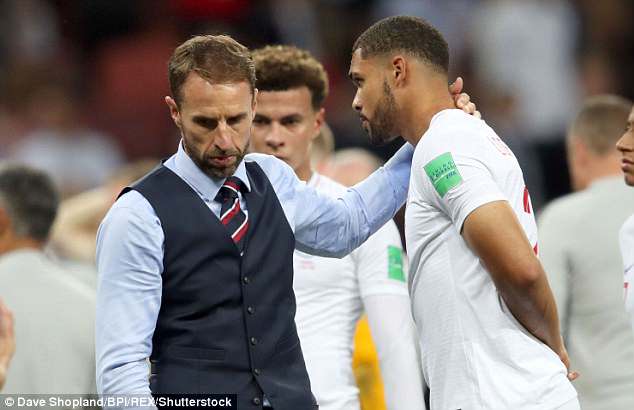 England Manager Gareth Southgate consoles Ruben Loftus-Cheek after England’s defeat last night. There are calls for him to be given a knighthood following the World Cup

Her official spokeswoman said:  ‘We would certainly like to host a reception for the England football team, who did so well in Russia, and that is something that we are going to talk to the FA about.’

It comes maid calls for Southgate to be given a knighthood for taking the squad to the semi finals. 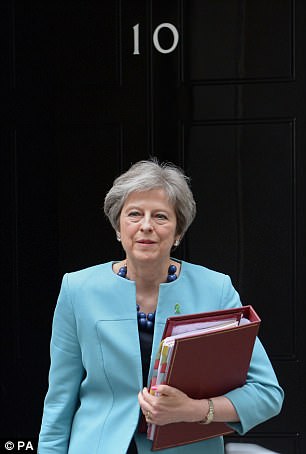 The PM  pictured outside No10) has hailed the success of Gareth Southgate and his squad, who took England to the semi finals in the country’s best run since Italia 1990

Commenting on the calls earlier today, Mrs May’s spokeswoman said: ‘She obviously thinks he led the team fantastically. The whole country should be proud of how far they got.

‘In terms of honours, there is an independent, robust procedure. He did a fantastic job and the players and fans can look forward to a bright future.’

Some 26.5 million Britons packed into pubs and onto their sofas to w atch England in the  World Cup clash last nightl.

After goin 1-0 up in the first five minutes they ended up losing –  after condcdeing a second goal in extra time.

But despite tears of disappointment across the country at their defeat, the team have been universally praised for their play and conduct off the field.

Pundits have said how they have united a nation bitterly divided  over Brexit.

Tearful stars including Jordan Pickford, Marcus Rashford, Kieran Trippier, Harry Maguire and Kyle Walker were comforted by their partners, parents and children after their extraordinary and unexpected World Cup adventure in Russia came to an end.

On the pitch their visibly emotional manager hugged every player, most of them in tears, as the 10,000-plus English fans in the stadium cheered them and sang ‘Three Lions’ and Oasis’ ‘Don’t Look Back in Anger’.

England striker Jamie Vardy was among the stars to express his gratitude for the England fans, adding ‘thank you to each of you who have been there each step of the way’ 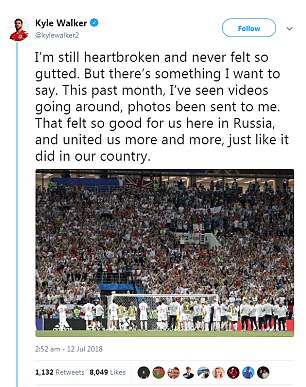 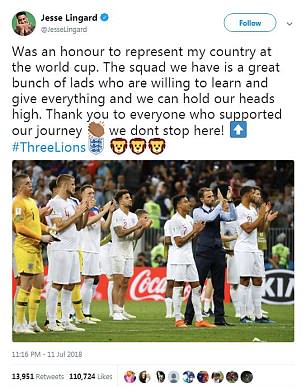 This morning, many of the stars took to social media to explain that they were ‘heartbroken’ and left feeling ‘gutted’ after the side’s exit, while others praised Southgate for restoring pride in the national team.

Defender Kyle Walker called for England to ‘keep the unity alive, I love you’, as his teammate Marcus Rashford tweeted a photograph of himself with his manager with the caption ‘you’ve brought belief and the love of football back. Thank you boss from the whole nation’.