A few weeks ago, when Melbourne’s COVID-19 infection numbers were at their highest, I reread the 2009 Age Book of the Year, Steven Amsterdam’s Things We Didn’t See Coming. It’s a terrific Australian novel about someone dealing with a series of terrible disasters in a future Australia – drought, floods, food shortages, pandemics. There’s even a barricade thrown around what seems to be Melbourne to protect the rural communities from whatever is plaguing the city. 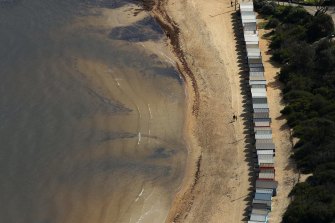 That was a little disturbing, but the book was also consoling – the unnamed protagonist is funny and pragmatic, tough and tender, and just getting on with whatever life dishes out to him. While 2020 has not proved quite as awful as Amsterdam’s vision, his book really captures the feeling that all our plans have been continually upended.

One thing I definitely did not see coming at the start of the year was that I would spend 14 weeks editing The Age. To be honest, I was planning to take a large slab of long-service leave and had spent several months planning a trek on foot across Europe.

Instead, I stepped into the role mid-June, when our coronavirus numbers were already ticking north of 20 a day, and we were scrambling to cover all the school and business outbreaks, like spot fires during a heatwave.

Melbourne’s second surge and hard lockdown immediately became the biggest story the newsroom had ever covered – all while our team worked remotely in back rooms or bedrooms or on kitchen tables.

As I write, we’re readying to watch the Premier appear before the hotel quarantine inquiry. Victorians have spent a lot of time this year watching Mr Andrews at his daily press conferences, but this appearance, where the lawyers get to press him on details, is of a different magnitude.

I am very proud of the work The Age has done on the hotel quarantine issue.

We were the first to break the story of Victoria’s botched hotel quarantine system, reporting in early June on the lax standards of some security guards and the infection outbreaks well before the Premier launched the $3 million inquiry.

It was The Age that exposed the poor planning and oversight that left the state’s frontline infection control in the hands of casual subcontractors and untrained public servants.

Our reporting was scrupulous, based on interviews with guards, guests and government staff, supported by high-level leaked documents.

But even so, we have been dismayed by what we’ve learned at the inquiry – especially from the state’s most senior civil servants and key cabinet ministers. None of them have admitted to any particular ownership of this terrible disaster, which we now know was the source of a particularly virulent coronavirus infection that has claimed over 750 lives so far and shut down the entire state.

Victoria’s lockdown has been contentious – and of course it must be when it affects us all directly in so many different ways. I’ve really appreciated the feedback from all of you, the thoughtful criticisms and pointed questions as much as the notes of appreciation.

Debate has been polarised but our current state of disaster lays bare all sorts of questions about good governance, social connection and the future of the city and the regions. It must become a crisis of opportunity, a chance to ask questions about what we do next – and not just on the road map to COVID normal.

Melburnians have proved themselves extraordinarily adaptable and resolute under pressure. The precipitous drop in numbers is a credit to ordinary Victorians dealing with whatever this crisis has handed to them.

No, we didn’t see this coming – but we need to work out where we are going next.

Thanks so much for subscribing. From next week, you’ll be hearing from our new editor, Gay Alcorn. She’ll be terrific and The Age will thrive under her.