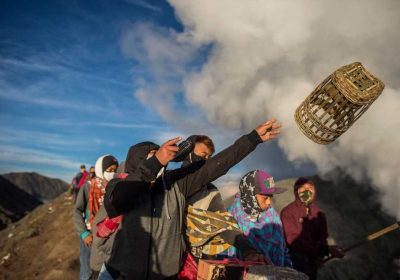 WHO warns of COVID surge in Indonesia fed by virus variants

Each year, members of the Tengger tribe cast livestock and food into the crater of Mount Bromo. The Hindu festival is called Yadnya Kasada.

According to legend, the ritual dates to the 15th-century, when the Javanese princess and her Brahmin husband were unable to conceive.

The gods agreed to answer their prayer with 25 children, as long as the youngest was given to the volcano. It’s said the 25th child leapt into the crater of his own free will, to secure the future of the Tengger.

One Tenggerese, Wantoko, brought his own crops to toss into the volcano on Saturday.

“I brought these crops so that my fields will be fertile and I have a good harvest,” he said.

According to AFP, local villagers who are not tribe members climbed the crater’s slope to try to catch some of the offerings before they were consumed.