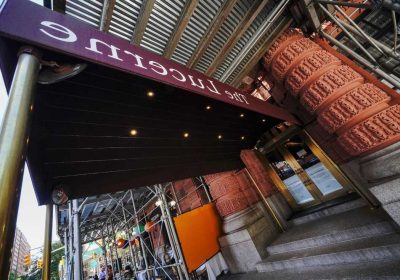 Thousands of homeless New Yorkers are finally being moved from city hotels and back into shelters this week.

The exodus — announced by Mayor Bill de Blasio last week — will ultimately see around 8,000 homeless people in total moved out of 60 hotels.

One of the first to be cleared was the Lucerne, the Upper West Side hotel that was a lightning rod for locals’ complaints about the area getting overrun and concerns about crime.

Just 68 homeless remained at the West 79th Street hotel at the end of Monday, the first day of the move, compared to 230 at the start of the day, CBS said.

Others were seen being moved Tuesday from The Blakely on West 55th Street and the Kixby Hotel on West 35th Street.

“There’s no other choice. What else am I going to do?” one of those being moved from the Lucerne, Daniel Freeman, told CBS, comparing it to an eviction.

“I wish they would leave us right here just until my housing comes through,” he said, admitting that he feared he’d instead be “heading to jail.”

City officials have insisted that relocating the homeless from shared shelter rooms to hotels helped “flatten the curve” during the most alarming stages of the coronavirus pandemic.

But Hizzoner said last Wednesday that it was time to move them back into congregate shelters due to “greatly improved” pandemic metrics, with record-low COIVD-19 levels and restrictions lifted.

“It is time to move homeless folks who were in hotels for a temporary period of time back to shelters, where they can get the support they need,” said de Blasio during his daily press conference.

“In shelters is where we can provide support, a variety of services, and that pathway out of shelter and into a better life.”

The initial housing in hotels had sparked a flood of complaints from locals, including legal battles to move them that eventually failed.

However, as the temporary residents started moving out this week, some locals insisted they would now be missed.

“I just hope that they’re doing the right thing and giving them a better start. I have no problem with them being here in the first place,” said Upper West Side resident Janet Pytlik told CBS.

Around 1,500 homeless will be moved from eight midtown and uptown hotels this week, officials told The City. They include some from OYO Times Square, Hotel Times Square, the Comfort Inn on West 44th Street, Four Points on West 40th Street and The Bentley on East 62nd Street.