Madrid: Tens of thousands of protesters have called for Prime Minister Pedro Sánchez of Spain to be deposed, denouncing his proposal for talks to try to ease the tensions around the simmering secessionist conflict in Catalonia.

The demonstration — held on one of the main squares of Madrid on Sunday and convened by right-leaning parties under the slogan "For a united Spain, elections now!"— was the largest against Sánchez since his minority Socialist Party government took office in June. 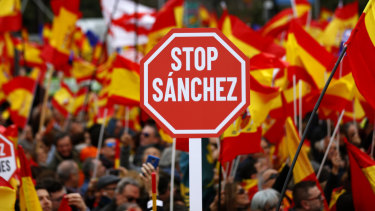 Demonstrators hold banners and Spanish flags during a protest in Madrid, Spain, on Sunday.Credit:AP

The government's proposal last Tuesday to appoint a rapporteur in talks among political parties to address the Catalan independence crisis has galvanised the opposition, which deems it a betrayal and a surrender to pressure from Catalan separatists.

The protest Sunday came two days before the start of a landmark trial of 12 Catalan separatist leaders, which is also likely to stir up emotions over a territorial conflict that remains at the top of Spain's political agenda. The defendants are accused of rebellion and other crimes stemming from their declaration of their region's independence in the autumn of 2017.

On Sunday, Pablo Casado, the leader of the conservative opposition Popular Party, told protesters, many of whom were waving Spanish flags, that Sánchez had been negotiating "under the table" with Catalan separatist politicians. He called on the prime minister "to stop immediately the dialogue with those who want to break up Spain" and to hold instead a snap general election.

Sánchez said before the protest that he was working "to resolve a crisis of state that the Popular Party aggravated while it was in office," particularly during the secessionist turmoil of 2017. 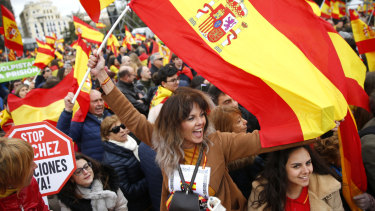 In October of that year, the crisis in Catalonia boiled over when a separatist majority of MPs in the Catalan regional Parliament unilaterally declared independence, prompting the central government in Madrid to impose direct rule on Catalonia. Their declaration followed an independence referendum won by secessionists.

Spanish courts had ruled the referendum unconstitutional even before it was held, but the vote was held anyway amid clashes between Spain's national police and people going to the polls.

Most of the 12 defendants who are appearing before the Supreme Court were members of the Catalan government that organised the referendum. Nine of them have already spent more than one year in jail, after being denied bail.

Sánchez has a tenuous grip on power, at the helm of a Socialist Party that controls only one quarter of the seats in Parliament. This month, he is hoping to get parliamentary approval for his national budget, which would require maintaining the support of the MPs from Catalonia who were among the smaller parties that helped him unexpectedly win office last June. 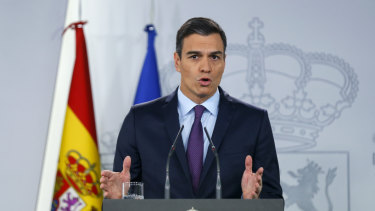 Those parties have said that their vote for the budget is conditional on the Catalan talks, including the issue of independence, something the government will not include.

The protest in Madrid on Sunday brought together the leaders of the three parties that are most fiercely opposed to the Catalan independence movement.

Casado was joined by Albert Rivera of the center-right Ciudadanos party, and Santiago Abascal, the founder of Vox, a far-right party that made its electoral breakthrough last December in an election in the southern region of Andalusia.

Abascal told the crowd that the central government should put Catalonia back under direct control and should take measures "to suffocate" the independence movement.

Recent opinion polls have shown the Popular Party, Ciudadanos and Vox could win a majority of seats in Parliament if elections were held, allowing them to replace the Socialist government.