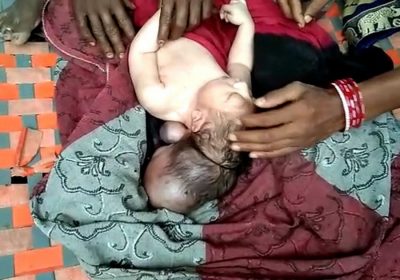 A baby born with three heads has been dubbed an incarnation of God.

Strangers in India have reportedly been making pilgrimages to see the infant since its birth in Uttar Pradesh was announced on July 12.

The mother named only as Ragini is understood to have been through a "normal" and healthy pregnancy which made the birth of a three-headed child all the more shocking.

Photos and video footage show adults adjusting the the newborn baby so it can lie on top of blankets without its additional heads causing discomfort.

The two extra heads are directly attached to the back of its "normal" head and even have hair. The two additional heads appear to be heavy as the person picks them up off the blankets, but the baby does not appear to be in any kind of pain.

Both mother and child are reportedly doing well and have left the hospital and returned home.

However, they are said to be upset after being inundated with visits from people who are desperate to see the newborn baby.

Locals are reportedly calling it an "incarnation of God" and people are travelling miles to reach the home so that they can bless the baby.

Last year a cruel dad-in-law from Uzbekistan, forced his son’s wife to give birth to a two-headed baby – before ordering her to give it up for adoption.

The mum was told the twins were conjoined 21 weeks into her pregnancy – but her “deeply religious” dad-in-law banned her from having an abortion.

The babies had separate heads and brains but share one body – with two lungs, a single stomach and one genital organ.

Earlier this year a farmer in North Macedonia was spooked when a cow gave birth to a mutant calf with two conjoined heads.

Villager Vasko Popovski from Kravari near the city of Bitola, said the mutant animal has four eyes, two noses, two mouths but one brain.