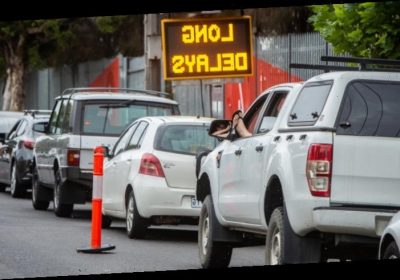 The new infections bring the number of active cases across the state to 31. There were 22,477 tests completed across the state on Saturday, according to the Department of Health and Human Services.

No new cases were reported in international travellers returning from hotel quarantine.

Lines at some Melbourne drive-through testing facilities were extensive on Sunday morning, with closures already being reported online.

Cars were bumper to bumper for hundreds of metres at the Melbourne Sports and Aquatic Centre (MSAC) in Albert Park more than an hour before it was set to open.

Melbourne residents took to social media to complain that the MSAC testing facility starting turning people away at 8.20am.

Emma, a caller to 3AW Weekend Breakfast, said there were 40 cars waiting at the Ascotvale Melbourne Showgrounds site at around 7.30am. The site does not open until 9am.
Others were reporting lines of cars stretching almost a kilometre at the Chadstone testing site on Sunday morning.

Returning travellers from NSW reported they had waited in line for more than six hours on Saturday, with others reporting they were turned away from five different location across the day due to demand.