Three people were killed and eight wounded in a shootout between the families of two Turkish politicians at a campaign event.

Ibrahim Halil Yildiz, an MP for the ruling AK Party was visiting shops in the Suruc district of Sanliurfa province on Thursday as part of his election campaign.

He got into a heated argument with local pro-Kurdish Democrat Regions Party (DBP) official Esvet Senyasar that escalated into a gun battle. The pair’s families and supporters, including Kurdish shopkeepers, exchanged gunfire from AK47s and attacked each other with knives, according to local media.

Eight others were wounded and rushed to hospital where violence continued as AKP supporters attacked Mr Senyasar’s group. 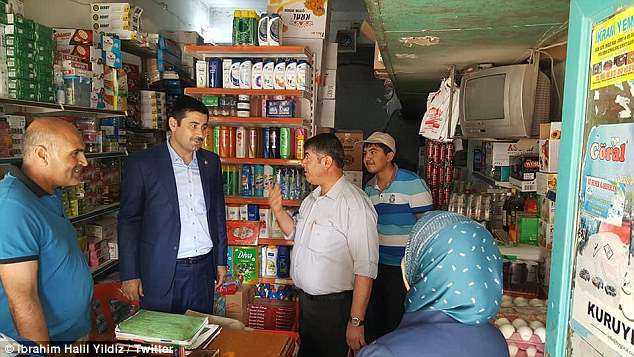 Some reports alleged the Celal and the other DBP member were killed in clashes near the hospital in response to Mehmet being gunned down.

The left-leaning outlet reported the argument started over products being packaged in green, red and yellow in the shops – the colours of the banned Kurdistan Workers’ Party. Ibrahim Halil Yildiz, an MP for the ruling AK Party was visiting shops in the Suruc district of Sanliurfa province as part of his election campaign when fight started

It also claimed Mr Yildiz personally stabbed a DBP official during the melee.

Police detained about 10 people and Turkish troops and extra police were deployed to the town to restore order.

Turkey is deep in the campaign for snap parliamentary and presidential elections on June 24, with several campaign booths attacked around the country.

President Recep Tayyip Erdogan called the early elections to solidify his position after changing the constitution to a model that gives the president more power.

The new government system does not kick in until after fresh elections.