Three sisters shriek with delight after being given a young puppy Puppy love! Three sisters shriek with delight when their mother surprises them with an adorable 11-week-old dog

The hysterical moment three sisters finally received their dream puppy after patiently waiting for two years has been caught on camera.

Mother of three, Sonya McPolin, decided to treat her daughters, Laila, six, Maddie, five, and Karis, four, to a puppy after they’d spent the last two years asking for a dog of their own.

And two weeks ago, on April 11, the girls’ dream came true and Mr McPolin filmed the special moment on her phone. The three girls, Laila, six, Maddie five, and Karis, four, had no idea they were getting a dog Sonya McPolin from Co Armagh, surprised her three daughters with the new puppy

Sonya was left in hysterics after her girls continually screamed in excitement after spotting 11-week-old, Betsy, in a small cardboard box.

The mum, from Killeavy, County Armagh, Northern Ireland, added: ‘My girls have wanted a puppy for at least two years.

‘But it wasn’t until Maddie had a stomach bug and when I asked what would make her feel better she said a puppy.

‘We saw a picture of Betsy and thought she looked so cute. We kept going back to her picture. 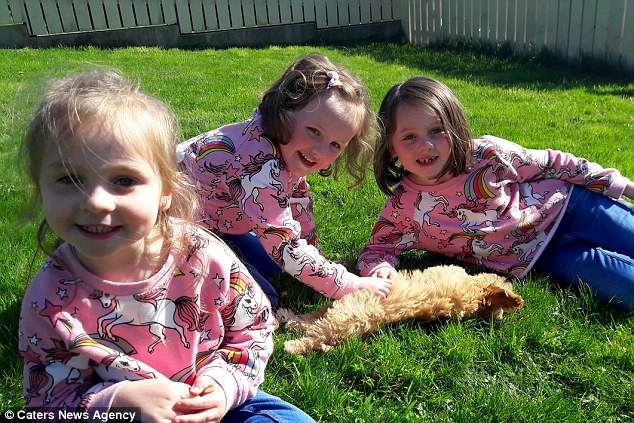 The three girls, from left, Karis, Maddie and Laila, welcomed Betsy the dog to their home 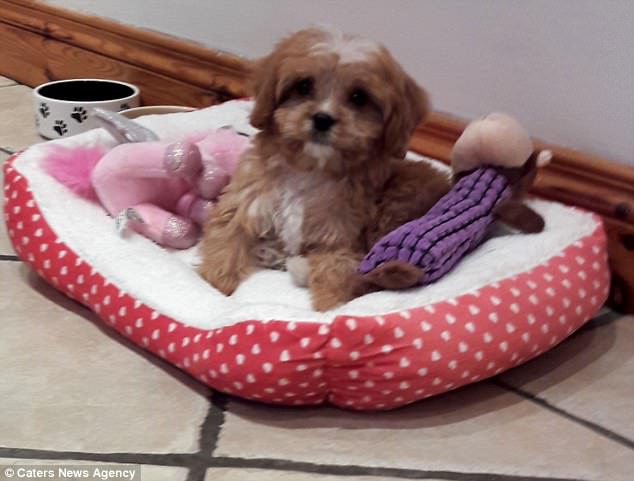 ‘The following day I phoned asked all the necessary questions and arranged to go and see her. It was a six hour round trip!

‘But I couldn’t wait to get home to see the girls reactions. I phoned my mum and told her to tell the girls we were a few minutes away.

‘I expected them to be surprised but not to be that surprised!

‘Maddie was so overwhelmed she could hardly breathe. I knew she would be most pleased as she loves animals n constantly asked for a dog.

‘The girls had a short list of names for a puppy but when they saw her they decided on Betsy as they said she looks like a Betsy.

‘My husband also took an hour off work to come and see the girls reactions.

‘The two of us felt like crying when we saw how happy they were. Betsy is one of our family n we couldn’t be without her now.’