Thunberg released after being detained follow German mine protest 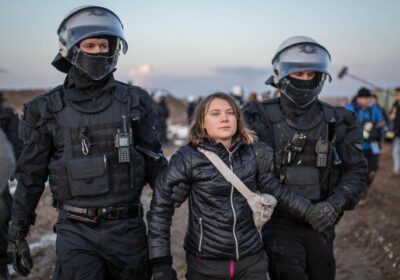 Swedish climate change campaigner Greta Thunberg has been released by police following an identity check after joining demonstrators to protest against the expansion of a coal mine in Germany. The 20-year-old activist was detained alongside other protesters while demonstrating against the opencast coal mine of Garweiler 2, some 5.6miles from Luetzerath.

Police detained demonstrators after warning the group that they would be removed by force if they did not move away from the edge of the mine.

The village, which is located in North Rhine-Westphalia, is currently being cleared to allow for the expansion of the mine.

Energy company Rheinisch-Westfälisches Elektrizitätswerk (RWE), who own the mine, agreed with Berlin that it could demolish Luetzerath in exchange for its faster exit from coal and the saving of five villages originally slated for destruction.

However, campaigners have complained Germany should focus on expanding renewable energy instead of mining any more lignite or brown coal.

JUST IN: Germany will not act alone sending tanks as Scholz warns of ‘escalating’ war

However, Thunberg and other activists remained at the site as they staged a sit-in protest into Tuesday.

Reuters footage showed a policemen telling the group: “We are going to use force to bring you to the identity check, so please cooperate.”

A spokesperson for Aachen Police also told Reuters: “Greta Thunberg was part of a group of activists who rushed towards the ledge.

“However, she was then stopped and carried by us with this group out of the immediate danger area to establish their identity.”

The 20-year-old was carried away by three police officers after she addressed around 6,000 protesters who marched towards Luetzerath on Saturday.

She said: “Germany is one of the biggest polluters in the world and needs to be held accountable.”

She retweeted one post which claimed: “Never seen such police violence in Germany as just before.”

Another retweeted post added: “What we are experiencing today and the last few days is pure police brutality.

“We are shocked at how the police are proceeding and condemn this behavior.

“We remain steadfast because we know what we are fighting for: climate justice!”