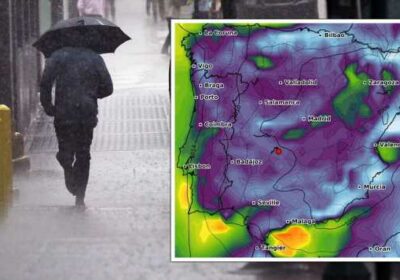 Five southern French departments came under orange storm alerts on Tuesday after last week’s sweltering heatwave gave way to humid and more aggressive weather conditions. Throughout the evening and the night, France’s clouds will gradually spread over Belgium. In Spain, forecasters have issued warnings, too – with coastal regions in Catalonia and the north at particular risk of strong wind gusts and large waves.

France’s worst-affected areas could see winds of up to 100km/h, while rainfall could reach 120mm per hour.

The impacted departments are Aveyron, Tarn, Aude, Hérault and Gard, where the orange warning came in force at 4pm local time.

Every other metropolitan department was already under a yellow storm alert.

Rain arrived from the northwest and spread to the southwest over the course of the morning. 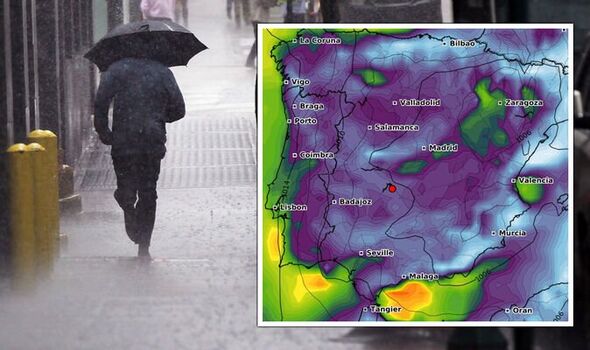 In the afternoon, the storm was expected to grow more violent, reaching the Massif Central, the highland region in the middle of southern France, and areas further east.

The French should expect significant thunder and lightning, hail showers, wind gusts of 80 to 100km/h and heavy rainfall, with downpours of 20 to 40mm over an hour in some areas, Météo France said.

In certain parts around Hérault and Gard, rainfall could reach 120mm per hour.

The national meteorological service urged the public to beware of the risks of flash flooding, as three weeks to one month’s worth of showers fall over the next couple of days.

The deputy mayor of Alès (Gard), Christian Rivenq, said: “To avoid taking any risks, we are preparing for the worst. We are hoping that the reality will be less than the forecast.

“This is arriving a little early in the season because of the intense heat [of the last few weeks], as this type of event is generally expected from September 10, onward.”

Get the latest three-day weather forecast where you live. Find out by adding your postcode or visit InYourArea

Speaking to Franceinfo, Mr Rivenq added that Alès’ crisis management measures have been activated and that staff were tracking the development of the weather situation.

He said: “We are lucky to have tools that we did not have 20 years ago.

“We are cleaning drains because with the drought, leaves have fallen. We must clean so that the water system can function at full capacity in the case of a storm, to prevent the flooding of cellars and ground floor spaces.

“We are also working on parks. And we are carrying out a lot of preventative [work], warning people.”

DON’T MISS
POLL: Should Liz Truss call an early snap general election? [VOTE]
When will it rain in August? INCHES of rain to come [MAPS]
Russia desperate for equipment as helicopter shot down by Ukraine [VIDEO] 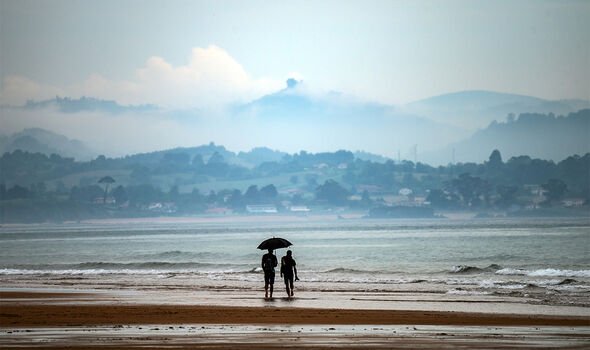 In neighbouring Belgium, as high still reached 30C and the sun shone in some areas on Tuesday morning, thundershowers made their way in in the afternoon.

According to the Royal Meteorological Institute (RMI), precipitation could already be heavy at night, with minimums temperatures between 15C and 19C, with an often light and variable wind.

Wednesday will be unstable with periods of rain and showers, sometimes intense and stormy the RMI said, and hail and gale winds can be expected.

Highs will be considerably lower, ranging from 21C to 26C.

On Thursday, once the possible fogs and mists have cleared, skies are expected to become quickly changeable with a few more showers, sometimes intense or even thundery.

In Spain, six communities are under alert. 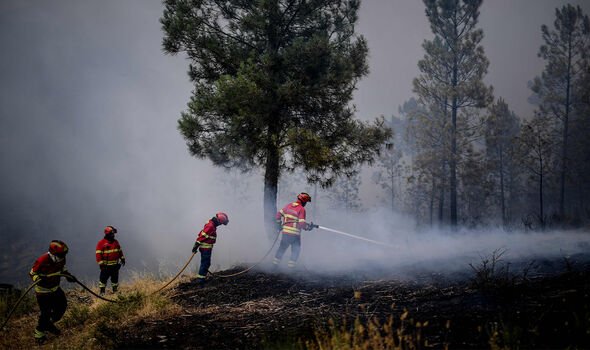 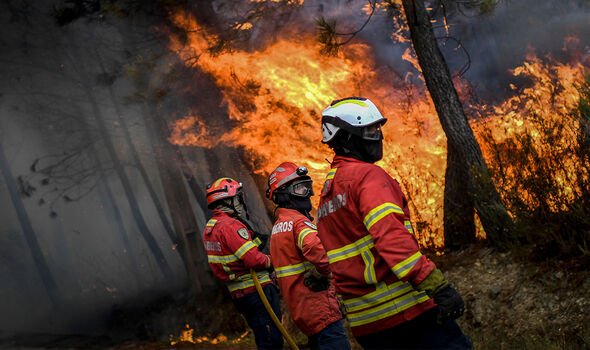 Aragon and Catalonia are at an orange level due to significant risk of strong coastal phenomena, particularly in the Bay of Biscay, and due to storms and rains in the northeast.

At a yellow level are the communities of Asturias, Cantabria, Galicia and Navarra, AEMET said.

Meanwhile, Portugal continues to battle wildfires which have proven devastating throughout the whole summer.

The country has been experiencing an exceptional drought this year, with its hottest July in almost a century.

Since the beginning of 2022, about 80,000 hectares have already become a smoke zone, the largest area since the deadly fires in 2017 that killed 100 people, according to the Institute for Conservation.

On Monday, a wildfire in the Serra da Estrela Natural Park in central Portugal that was declared under control last week flared up again, according to civil protection.

More than a thousand firefighters were deployed on Tuesday morning.

Civil defence commander Andre Fernandez told a press conference that several villages had been evacuated as a precautionary measure.

The Serra da Estrela fire started on August 6 and reached its peak at an altitude of about 2000 meters, destroying the unique forest areas of the UNESCO-recognised Global Geopark which the mountain range sits in.