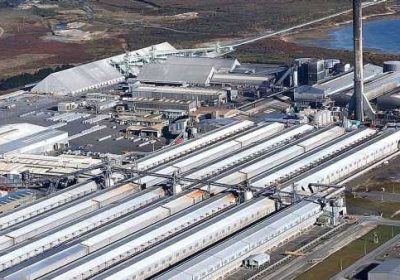 By Phil Pennington of RNZ

The Tiwai Point aluminium smelter at Bluff has stockpiled more than 100,000 tonnes of cyanide-laced hazardous waste less than 100 metres from a fast-eroding Southland beach.

The smelter company will not reveal its plans for the hazardous waste, despite international industry guidelines it has signed up to that say it should.

The government said earlier this month it remained “completely blind” about what contamination the closure of the smelter at Tiwai Point might leave behind.

The Rio Tinto-controlled smelter said in 2010 that it had stockpiled 186,000 tonnes of the waste; it has not said how much it has now, but since then it is estimated it would have produced about another 80,000 tonnes, or a quarter of a million tonnes all up. It has held export permits for 78,000 tonnes of that.

By comparison, the smelter dross-ouvea pre-mix causing such a problem at Mataura totals just 8000 tonnes.

SCL is the “most significant solid waste” to come from smelting, according to the aluminium industry’s global body, the International Aluminium Institute.

It is such an environmental headache worldwide that the institute last year put out 70 pages of guidelines and case studies on what to do with it.

The guidelines – which Rio Tinto helped produce – say companies should make their plans for SCL public.

But New Zealand Aluminium Smelters did not respond to RNZ’s request for its plans and risk assessment of SCL at Tiwai Point, other than to say, “We don’t share operational details with the media” or the public.

After repeated approaches by RNZ, the company added:

“We are satisfied that the SCL is stored safely and that there are appropriate systems in place to enable NZAS to monitor the performance of the storage facility.”

An Australian government study into dealing with its nationwide stockpile of about 700,000 tonnes, in 2016 warned:

“The toxic, corrosive, and reactive nature of SPL means that particular care must be taken in its handling, transportation and storage.”

It noted a fatal explosion from mishandling the waste in Canada in 1990; the waste reacts with water to give off toxic and explosive hydrogen, methane, and ammonia.

At Tiwai Point, 106,000 tonnes are stockpiled on an engineered concrete pad the size of about two football fields, with purpose-built drainage and capture, a kilometre east of the main plant opposite Bluff.

The company revealed this figure late on Friday.

The pad is just 85 metres from the south-facing beach next to Foveaux Strait. It is next to Department of Conservation land and near the internationally recognised Awarua wetlands.

The smelter company’s own documents show erosion of the beach has doubled since 2017 to four-to-five metres per year.

It reported to the Conservation Department that it “needed to know if the fast encroaching shore line was likely to threaten NZAS’s groundwater monitoring bores or infrastructure by the Cathode Treatment Plant”.

The plant treats runoff from the SCL stockpile before it goes into the sea under consents from the regional council, and the smelter monitors groundwater in the area.

“We continuously monitor the condition of the shoreline and report to Environment Southland annually,” the company told RNZ.

The storage pad shows up in online maps as a big white rectangle.

A decade ago, the smelter was aiming to rid itself of the SCL stockpile by 2030.

Lack of clarity over plans for SCL stockpile

More than half of the 1.6 million tonnes of SCL generated worldwide each year is stored indefinitely or landfilled. But burying it in a landfill is “the least preferable” approach, and all the cleanest options are expensive, such as processing it to use in cement production, the international guidelines show.

These state that companies should have long-term management plans and risk assessments for the waste, and be entirely upfront with the public about them:

“Transparency on company policies, procedures and processes” and decision-making, and “public disclosure of SPL management plans, activities and performance” were required.

However, New Zealand Aluminium Smelters’ current management plan, risk assessment and its plan to deal with the waste by the new closure date for the plant of December 2024, remain under wraps.

Without mentioning SCL, the company said in response to RNZ’s questions about the waste, that it was conducting an “extensive” study of how to close Tiwai Point “in a responsible manner”, with input from independent scientists.

The plan’s first stage was due out “late this year”, and it would make details of that public in due course.

The regional council Environment Southland, that regulates discharge consents, said it was aware of the SCL stockpile, but could not comment on any plans for it.

The Invercargill City Council, that regulates waste storage, said it had just now decided to reverse its decades-old practice of not monitoring any operations by any industry that are permitted under its District Plan. This includes the stockpiling and disposal of waste at the smelter.

The veil over the smelter’s plans compounds a general lack of visibility, with the Environment Minister David Parker this month admitting he was “completely blind” about the residual contamination that will confront the country at Tiwai Point.

The government has been focused on the Mataura dross problem, which has received media attention, and is playing catch-up at the smelter itself.

The Environment Ministry told RNZ it had been engaging with the smelter beginning five months ago, “over how it will address its waste situation”.

The Gore District mayor has said it is critical to find out about this or Southlanders might face a big clean-up bill – but added he doubted even Rio Tinto knows the environmental situation.

Taxpayers are now funding a $300,000 regional council study, and the council aims to increase monitoring and groundwater sampling.

The Australian government produced its own study into clearing SCL stockpiles five years ago, aiming to cut those back over the following decade.

It noted financial costs of managing the waste were “significant”, at least $1000 a tonne, and ongoing in landfills.

The United States classified SCL as a hazardous waste in 1998.

A US Environmental Protection Agency ruling prohibited disposal of untreated SCL, and stressed the need to destroy the cyanide in it, saying this was is the most “dangerous constituent of SPL based on its concentration, toxicity, and the extent of contamination caused by past land disposal of untreated spent potliners”.

At Tiwai Point, the smelter company now faces legal action over the SCL waste. Retired environmental engineer Carl Reller from Wairarapa is seeking an enforcement order from the Environment Court to force a clean-up.

At Mataura, it took legal action by the small lobby group, the Environmental Defence Society, to achieve a recent deal with Rio Tinto to remove the bags of dross – but taxpayers will pay half the $1m cost.

The SCL waste comes from inside the cells used to make aluminium, when the lining breaks down after a few years.

It has been piling up for 50 years since Tiwai opened. Planning approval of the smelter in the late 1960s did not provide for its eventual closure, Invercargill City Council documents show.

The city council’s 2019 district plan says that preservation of the coastal environment beside the smelter “is a matter of national importance”.

It adds that the plant’s environmental effects “are continuously monitored and independently reviewed”, though not by itself.

The international aluminium industry guidelines require that the suitability of sites for handling SCL be assessed – they discuss, for instance, storing it in buildings protected from water surges.

A 1995 study at Tiwai looked at pumping up groundwater that had SCL leachate in it, and treating it, but concluded that letting nature take its course was preferable, as the cyanide was being converted into a very low toxicity and very stable form in the groundwater.

Stormwater and leachate from the Tiwai stockpile currently is put through a treatment plant before going into the ocean.

In other respects, hazardous substance regulations apply – but these have been faulted. WorkSafe cited them specifically when it told the government recently that some of the regulations it had to work with “are so old” they were no longer relevant.

A full review of hazardous substances regulations is planned to start this year, the Ministry of Business, Innovation and Employment told RNZ.

Officials were already working on minor changes to address “some of the more pressing compliance issues”, MBIE said.

New Zealand Aluminium Smelters (NZAS) said in a statement to RNZ it took its operating responsibilities “very seriously and in accordance with all relevant legal and regulatory requirements”.

In mid-2020, it said it would shut the smelter by August this year.

The government stepped in, as it has several times, to stave this off, until late 2024.

Now, NZAS is saying that the closure process “is a lengthy one” involving extensive consultation, and it will be late this year before it has a first-stage closure plan ready.

The smelter had $226m set aside for closure and rehabilitating the site, according to a2013 Treasury report.

But a big chunk of that could go towards “preparing assets for sale and redundancy”, Treasury warned.

The city council’s district plan was changed in 2019 to encourage rehabilitation of the site if the smelter closes and the buildings cannot be adapted for re-use. But it cannot enforce rehabilitation.

The smelter, which meets international certified standards for responsible production, employs 1000 people and estimates it generates $600m a year for the national economy.

How much liner waste is left?

RNZ has asked how much SCL waste is left at Tiwai Point but the company has not said.

A video shot from the beach shows the pile on the concrete pad is many metres high.

The company began an export project in 2010, getting its first permit in 2014; it currently has two permits to export 16,000 tonnes a year to Europe – though these permits expire next month.

Some of the Tiwai waste has been processed overseas into mineral wool insulation, or detoxified for use in cement, bricks and the like in Europe, according to the Aluminium Institute, though it gives no figures.

In addition, a cement plant at Westport took a fraction of the waste for a couple of years before it shut down around 2014.

But the waste barely rates a mention in the company’s public environmental reports for the last decade, which NZAS referred RNZ to.

Environment Southland compliance manager Simon Mapp said in a statement that the concrete pad was “an historical storage site and we are informed that more recently, spent cell liner waste has been sent off site for appropriate disposal or for use by other industries”.

The regional and city councils had agreed to work closely, and work with the smelter on its closure plan, city council chief executive Clare Hadley said.

As to its u-turn over monitoring, a spokesperson said this was not targeted at the smelter, but a general direction from management to improve practices.

“Council has now determined it should do so [monitor], and is looking at how best to implement this,” council chief executive Clare Hadley told RNZ in a statement.

“When one reflects on other events, eg the recent fire in stockpiled tyres [in Canterbury], it is clear that we are all becoming much more aware of the impact of historic activities on environmental well-being,” Hadley said.

The Environmental Protection Authority (EPA) issues permits for hazardous waste export, but said any questions around environmental compliance belonged with the councils.

The EPA had more leeway now to support councils’ enforcement actions under the Resource Management Act, due to law changes last year, but monitoring councils’ RMA performance sat with the Ministry for the Environment, an EPA spokesperson said.

Rio Tinto recently suffered international opprobrium and underwent a clean out of some of its top global executives after an inquiry found it knowingly blew up ancient aboriginal caves in West Australia last year.