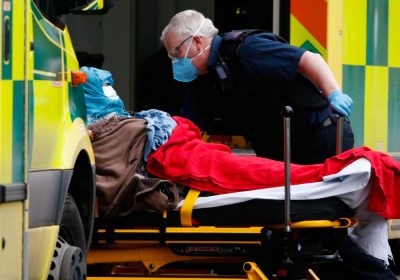 It is a year to the day since the UK's first confirmed coronavirus death.

The deadly virus quickly spread across the country, changing life as we know it and killing 104,371 people in the UK and counting.

The tragic death of 84-year-old Peter Attwood, from Chatham, Kent, was the earlier known involving Covid-19 in the UK, although that fact was not confirmed until August.

It also came less than a month after the World Health Organisation (WHO) tweeted a warning of a "cluster" of pneumonia cases in the Chinese city of Wuhan, some 5,500 miles away.

To give a stark example of how the situation has escalated, it took until March 15 for the cumulative UK death toll to pass 100. In the first half of January 2021, data shows that more than 900 people died a day on average from Covid-19.

The UK's 100th death came four days after the WHO declared the virus a pandemic, and in another eight days, on March 23, the country was entering its first national lockdown to try and get on top of the spiralling infection rate.

But from there things escalated very quickly. Having taken six weeks to go from one to 100 coronavirus deaths, it took just over a month for the death toll to reach 25,000 (April 17) and another month for it to pass 50,000 (May 23). The global death toll has now passed 2.2 million and only the USA, Brazil, India and Mexico have more fatalities than the UK's 103,126.

Last January the WHO tweeted: "China has reported to WHO a cluster of #pneumonia cases —with no deaths— in Wuhan, Hubei Province.

"Investigations are underway to identify the cause of this illness. WHO is closely monitoring this event and will share more details as we have them."

Authorities in China first reported the cases on December 31, 2019, the WHO say.

The Daily Star reported on the initial outbreak in China on January 1 last year, when there were just 27 cases of the virus.

In the UK, it took six months for the death toll to rise from 50,000 to 75,000, but only six weeks to go from 75,000 to 100,000 as the nation battles a devastating second wave of the virus exacerbated by highly contagious mutant strains.

In the last year countries have been plunged into repeated lockdowns to try and get a grip on the pandemic.

Every day life has changed beyond recognition with millions of people working from home, schools shut, sport played in front of empty stadiums and international travel grinding to a virtual standstill. But a number of vaccines have been developed, with their rollout crucial to returning to some sort of normality.

Three vaccines have been approved for use in the UK – the Pfizer/BioNTech jab, the Oxford/AstraZeneca vaccine and the one developed by Moderna.

More than 7.8 million people have now received the first dose of a vaccine, and more than 470,000 have had the second.