Tokyo Olympics is set to be the HOTTEST games on record 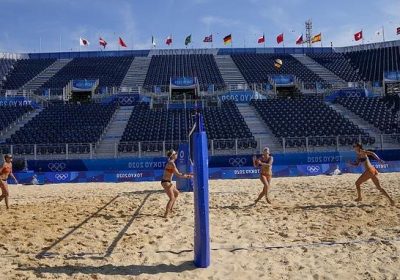 The Tokyo Olympics are set to be the hottest games on record with locals having been warned that it is already too hot to exercise outdoors.

Athletes arriving ahead of Friday’s opening ceremony are facing the prospect of competing in the middle of a Japanese summer, with peak temperatures expected average around 86 degrees Fahrenheit (30°C) into at least the games’ second week.

Fears over the temperature add to the already widespread concerns regarding the coronavirus during the games, with multiple cases of the deadly virus already being reported in the Olympic village, and among athletes, Olympic staff and attendees. 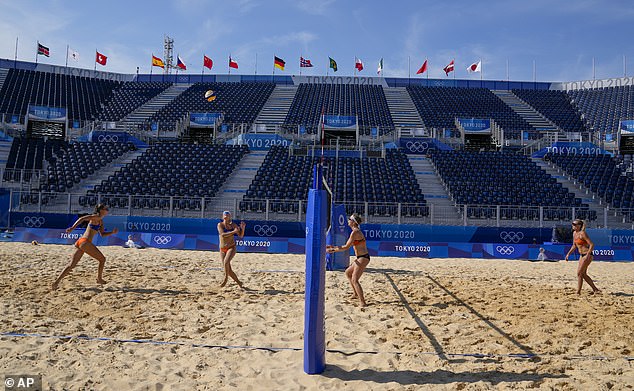 Pictured: The Netherlands women’s Beach Volleyball team during their training session at the Beach Volleyball ahead of the 2020 Summer Olympics, Tuesday, July 20, 2020. The Tokyo Olympics are set to be the hottest games on record, with Beach volleyball players already complaining that the sand was too hot for their bare feet in training

Tokyo claimed in its pitch for the 2020 Olympics that its ‘mild’ weather in July and August would provide athletes with ideal conditions in which to compete.

However, doubts over the claim were highlighted in as early as 2019 when the International Olympic Committee (IOC) put pressure on the games’ organisers to move the marathon and race walking events to the cooler Sapporo, found 500 miles north of Japan’s capital.

In 1964 – when the games were hosted in Tokyo for the first time – organisers moved the ‘summer’ games to Autumn, when temperatures are more bearable in Tokyo.

But with the games just days away and already having been postponed from 2020 due to the global pandemic, this option is not on the table.

Event organisers have instead introduced measures they say will protect the athletes from the worst of the heat, including mist fans, cooling tents and ice cream for the games’ volunteers.

As a result of the current temperatures in Tokyo, residents have been warned not to exercise outdoors, with the environment ministry’s colour-coded scale system warning residents to avoid regular or heavy exercise. 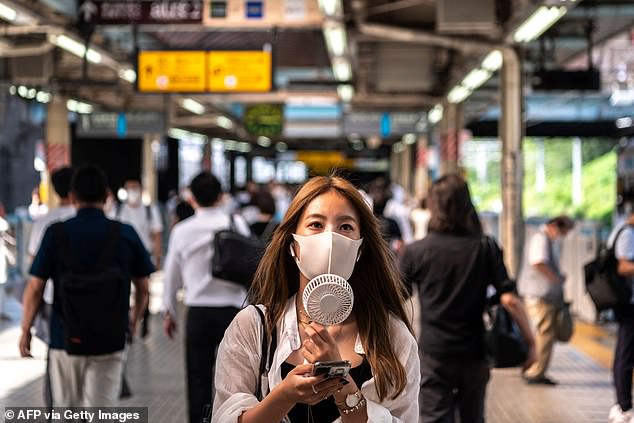 Pictured: A woman uses a portable fan to cool herself in Tokyo’s Oimachi station on July 20, 2021 ahead of the Tokyo 2020 Olympic games. Peak temperatures are expected to remain at around 86 degrees Fahrenheit (30°C) into at least the second week of the games

On Tuesday afternoon, the ministry reported that the wet bulb globe temperature (WBGT) – a metric that combines temperature, humidity, wind and solar radiation measurements – was standing at over 89.2 degrees Fahrenheit (31.8°C).

This prompted a ‘danger’ warning, as the ministry recommends sports activities should be stopped when the WGBT metric rises over 87.8 degrees Fahrenheit (31°C).

Last year, during the period of late July to early August (the same time frame of this years’ Olympics), the ministry issued 13 ‘no exercise’ advisories, according to The Guardian citing the Kyodo news agency.

While the WGBT is forecast to drop slightly in the coming days, into the high-20°C range, concerns remain over the well-being of the athletes competing in such high temperatures and humidity.

Beach volleyball players at Shiokaze park have already complained that the sand was too hot for their bare feet, leading to staff to hose down the playing surface.

Every year, Japan sees thousands of people suffer from the heat, particularly older people. In 2019, 71,000 people received medical treatment due to heatstroke, with 118 deaths being reported from June to September from the heat. 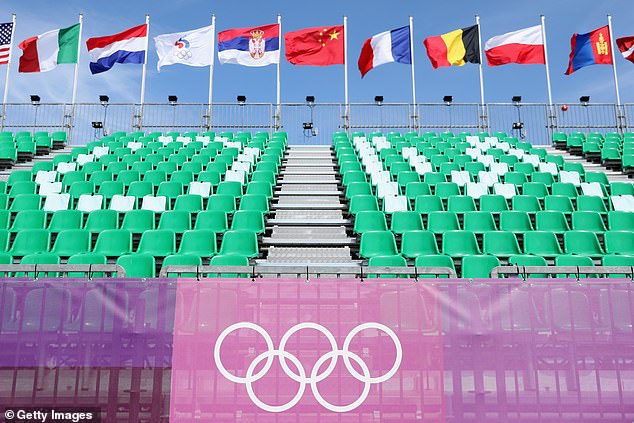 The Olympics will mainly take place in empty stadiums to the sound of recorded crowd noises due to Covid-19. Pictured: Olympic rings are displayed in front of empty seats for the 3×3 Basketball court at Aomi Urban Sports Park, Tokyo, July 20, 2020

Last year, there 65,000 people seeking medical treatment and 112 deaths – likely down from the previous year due to the pandemic.

‘Holding the Games during July and August … was a serious issue even before the coronavirus pandemic,’ Haruo Ozaki, the chairman of the Tokyo Medical Association, warned earlier this month.

‘There are still high risks of heatstroke at events such as competitive walking, triathlon and beach volleyball.’

The build-up to Friday’s opening ceremony has been exceptionally rocky, with Tokyo still under a state of emergency and public opinion consistently against the Games, which will be held largely without spectators.

Four people have tested positive for Covie-19 in the Olympic Village, heightening fears that the influx of thousands of athletes, officials and media will add to a spike in cases in Japan.

A teenage US gymnast staying outside the Village was also among the 71 Games-related cases reported so far. 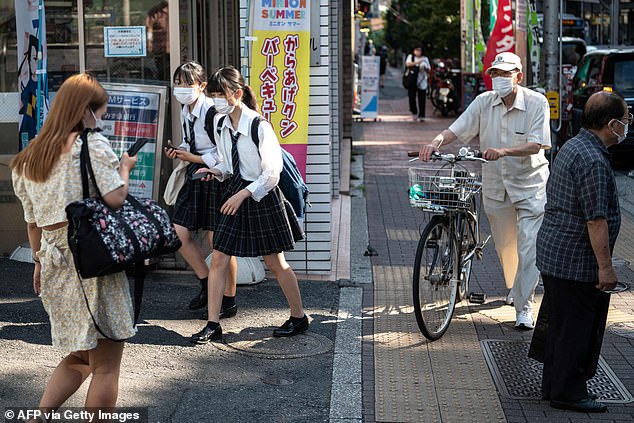 Pictured: People walk along a street in Tokyo’s Omori area on July 20, 2021 ahead of the Tokyo 2020 Olympic games. Every year, Japan sees thousands of people suffer from the heat, particularly older people

Olympic and Japanese officials have staunchly defended the Games, which are being held in a strict biosecure ‘bubble’ with daily testing. Eighty percent of athletes at the Games have been vaccinated.

The Olympics will mainly take place in empty stadiums to the sound of recorded crowd noises, starting with the opening ceremony in the 68,000-capacity Olympic Stadium.

The ceremony will take place without the music of Keigo ‘Cornelius’ Oyamada, who quit on Monday after an outcry over past interviews where he described bullying disabled schoolmates.

‘I have become painfully aware that accepting the offer of my musical participation in the Tokyo 2020 Olympics and Paralympics lacked consideration to a lot of people,’ he said in a statement.

Major sponsor Toyota, the world’s biggest carmaker, also scrapped plans to run an Olympic-linked brand campaign in Japan, as a senior official said the Games lacked ‘understanding’ from the public.

Coronavirus outbreaks at the Tokyo Olympics

The Tokyo 2020 Olympics, postponed for a year because of the coronavirus pandemic, will be held under unprecedented conditions including tight quarantine rules to prevent the spread of COVID-19 infections.

Nevertheless, a number of cases have emerged among athletes and other people involved with the Games.

Following is a list of cases, in chronological order:

JUNE 20 – A coach with Uganda’s squad tests positive on arrival at Narita airport and is quarantined at a government-designated facility. The rest of the team heads by bus for their host city, Izumisano, near Osaka in western Japan.

JUNE 23 – A Ugandan athlete tests positive, according to Izumisano officials.

JULY 4 – A member of Serbia’s rowing team tests positive on arrival. The other four team members are isolated as close contacts.

JULY 9 – One Lithuanian and one Israeli athlete test positive, according to reports. Later reports say the Lithuanian’s results were unclear and subsequently tested negative.

JULY 14 – A masseur for the Russian women’s rugby sevens team tests positive, forcing the team into isolation for two days, the RIA news agency reports. Officials in Munakata, southwestern Japan, confirm one staff member was hospitalised and say none of the team members could be considered a close contact.

– The refugee Olympic team delays its arrival in Japan after a team official tests positive in Doha. The infected official is in quarantine without symptoms, with 26 of the 29 refugees set to remain in their Doha training camp.

– Seven staff at a hotel in Hamamatsu, central Japan, where dozens of Brazilian athletes are staying, test positive, a city official says.

– Twenty-one members of the South African rugby team are in isolation after they are believed to have been in close contact with a case on their flight.

JULY 15 – Eight athletes from the Kenya women’s rugby team are classified as close contacts after a positive coronavirus case is found on their flight to Tokyo, says an official with the southwestern city of Kurume, where they were set to hold a training camp.

– U.S. basketball player Bradley Beal’s Olympic dream is cut short when USA Basketball announce he will miss the Games after entering coronavirus protocols at the training camp in Las Vegas.

– An Olympic athlete under a 14-day quarantine period tests positive for the virus before moving to the Olympic Village, the organising committee reports, without giving details. It says one member of the Games personnel and four Tokyo 2020 contractors also tested positive.

– A member of the Nigerian Olympics delegation is in hospital after testing positive at Narita airport, according to media reports. The person, in their 60s, has only light symptoms but was admitted to hospital because of their advanced age and pre-existing conditions, TV Asahi says, adding it was the first COVID-19 hospitalisation of an Olympics-related visitor.

– An Olympic-related non-resident under a 14-day quarantine period tests positive for the virus, the organisers say, without giving further details. Three Tokyo 2020 contractors, all of whom are residents of Japan, also tested positive, organisers say.

JULY 17 – Fifteen people test positive for the virus, the organisers say, including the first case at the athletes’ village – a visitor from abroad involved in organising the Games. The rest are two members of the media, seven contractors and five members of the Games personnel.

JULY 18 – Ten people, including two South African male soccer players staying at the athletes’ village, tested positive for the virus, organisers say. This is the first time athletes have been found positive within the village. The others are one athlete under a 14-day quarantine period, one member of the media, one contractor and five Games personnel.

JULY 19 – Three people – one member of the Games personnel, one member of the media and one contractor – tested positive for the virus, organisers say. Twenty-one people in the South African soccer delegation are categorised as close contacts, following positive test results for two soccer players from that country. The number of close contacts is later revised down to 18.

Those identified as close contacts can still take part in competition if they are found negative in a test conducted within six hours of the start of their event.

An alternate on the U.S. women’s gymnastics team tests positive and another alternate is a close contact, USA Gymnastics say. They remain at the team’s training camp just east of Tokyo.

JULY 20 – Nine people, including one athlete staying at the Olympic village, tested positive for the novel coronavirus, the organisers say. The other eight were a volunteer worker, a member of the Games personnel and six contractors.