Home » World News » Tragedy as boy, 7, dies after homemade igloo collapses and buries him in snow

Tragedy as boy, 7, dies after homemade igloo collapses and buries him in snow 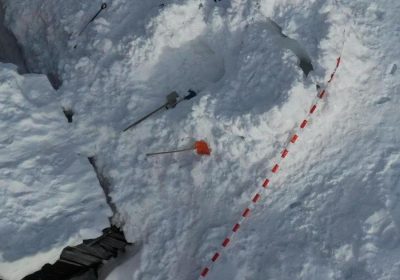 A schoolboy has tragically died after a homemade igloo collapsed on him.

The seven-year-old boy’s dad was also buried by the collapsed snow hut in Switzerland.

He desperately tried to rescue his son with the help of onlookers in Tarasp.

They spent 15 minutes frantically digging and looking before they found him buried under the snow.

The rescuers pulled him out and desperately tried to resuscitate him.

The youngster was airlifted to hospital in the city of Chur.

But doctors were unable to save him after the tragedy at 11am on Tuesday.

He did not regain consciousness and died as a result of his injuries.

The father and son had spent “days” building the igloo, which was 13ft (four metres) wide, according to Blick.

The public prosecutor's office and police are investigating the accident.

Police in Graubünden confirmed on Wednesday that the boy had died.

The force said he lay under the snow for so long that he died in the hospital as a result.

Roman Rüegg, a spokesman for the Graubünden cantonal police, said: "We started the investigation on Tuesday together with the public prosecutor's office."

Switzerland has been hit by heavy snow in recent days, with the Graubünden area recording several inches over the weekend.

An outdoors sports fan recently shared terrifying footage of the moment he and some friends were caught in an avalanche while skiing and snowmobiling in Wyoming, US.

Miles Penrose filmed a giant wall of snow tumbling down the the Uinta Mountains towards the group.

They managed to escape alive, although one his friends was left completely submerged by the snow.

Fortunately, he was rescued.