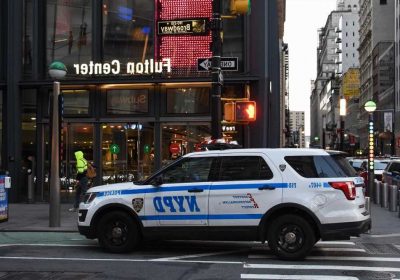 A 27-year-old transgender woman was stabbed with a screwdriver during a dispute at a Lower Manhattan subway station, police said Thursday.

The victim was on a Brooklyn-bound A train at the Fulton Street station shortly before 12:30 p.m. Wednesday when she was confronted by her attacker, according to cops.

“What are you looking at, f—-t?” the suspect said, looking at the victim.

The two got into an argument during which the victim used pepper spray to fend off her attacker, who stabbed her with a screwdriver.

The suspect fled and remains on the loose, police said.

“Our victim was hit with a screwdriver in the head and the leg,” NYPD Chief of Department Rodney Harrison said. “Somehow our perpetrator got away, but we’re once again doing a video canvass trying to identify the perpetrator.”

Harrison was speaking at an unrelated press conference with other top brass and the Gay Officers Action League to announce diversity measures for LGBTQ officers.

The chief said Wednesday’s attack is being investigated by the Hate Crimes Task Force.