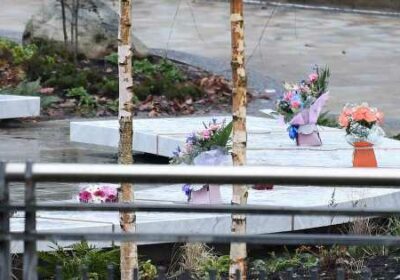 Families of the tragic victims killed in the Manchester Arena terror attack have been left "disgusted" by the actions of trespassers who have vomited on their memorial garden.

The memorial garden, named The Glade of Light, is not yet open to the public but families of victims have been left devastated to find security fences pulled down and people disrespecting the sacred site.

The garden is to commemorate the 22 people who lost their lives when Salman Abedi detonated a bomb at an Ariana Grande concert on May 22, 2017.

Caroline Curry, from South Shields, lost her 19-year-old son Liam in the attack as he was killed along with his girlfriend Chloe Rutherford, 17.

Ms Curry visited the site to find hundreds walking through it, despite the site being closed to the public until its official opening.

Speaking to the BBC, Ms Curry said she was “disgusted” by the actions of people and was even verbally abused by a man when she challenged him.

She also saw a woman vomiting in the area and claims youths were smoking what she believes to have been drugs.

Ms Curry and a family member of another victim tried to protect the site on Sunday with no security present.

Claire Brewster attended to have a look at the memorial but was “devastated” to find fences protecting the site were moved so people could walk through as they pleased.

Ms Brewster, who was also injured in the Manchester Arena terror attack, lost her sister Kelly 32, in the act of terrorism.

Manchester City Council have since confirmed it had sent a security team to late Sunday night to keep the memorial safe.

Speaking to the BBC, Councillor Pat Karney said: "The whole area is covered by CCTV and if footage shows it was due to the deliberate actions of mindless thugs, rather than a problem with the fencing itself, we will pass this information on to the police.

"We utterly condemn this mindless and disrespectful behaviour and will not hesitate to take action against those involved."

For the latest breaking news and stories from the Daily Star, sign up for our newsletter by clicking here.

Councillor Karney has also looked to reassure the families of the victims that he will do what is needed to “keep the site secure.”

Manchester City Council had previously stated the memorial, which is situated near Manchester Cathedral, would open to the public in January.

Greater Manchester Police also confirmed it has received a report of vandalism at the memorial and officers are investigating.