Trump releases new photos of himself at the G7 Look, we’re best friends! After THAT picture with Merkel, Trump posts a series of shots of him laughing and joking with G7 leaders and says they have ‘great relationships’ – despite spending the week trashing Trudeau and America’s trade ‘enemies’

President Donald Trump has released a series of photographs of himself at the G7 Summit in Canada last week showing he had a ‘great relationship’ with the other world leaders.

Taking to Twitter on Friday evening, he said a picture of himself sitting at a table with the other summit leaders surrounding him and looking angry had been taken out of context, and the pair were simply negotiating.

‘I have a great relationship with Angela Merkel of Germany, but the fake news media only shows the bad photos (implying anger) of negotiating an agreement,’ he wrote.

‘I am asking for things that no other American President would ask for!’

The US President’s sudden display of affection comes at the end of a tense week, where he has slammed America’s trade ‘enemies’ and endured the wrath of many summit leaders, who are furious he backed out of the G7 agreement just hours after it was agreed upon. 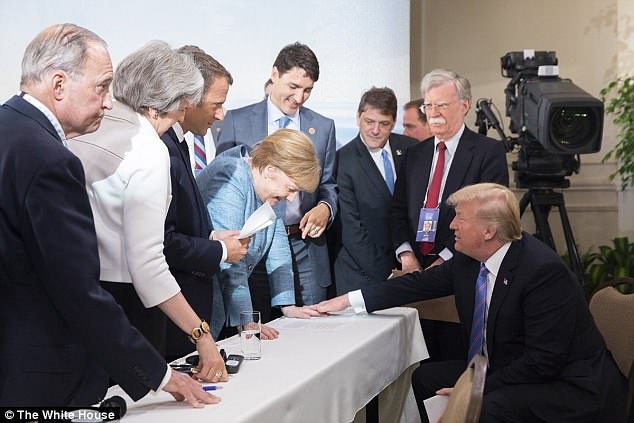 Trump said he had a ‘great relationship’ with the other leaders, despite what some images showed

Trump’s new pictures show the President at one point placing his hand over the German Chancellor’s, as she appears to smile, and addressing the group as they appear focused on his message.

In a second post just 20 minutes later, Trump shares images of himself with Canadian Prime Minister Justin Trudeau and Emmanuel Macron, the President of France.

One image of the trio shows them standing on a balcony, photographed from below.

As Trudeau smiles for the camera, Macron and Trump are seen clasping hands in what appears to be a sort of victory pose.

In another, Italian Prime Minister Giuseppe Conte is seen standing between Trudeau and Trump in a group photo, and all wear smiles on their faces. Trump claimed photos of him and other leaders looking angry around a table were taken during negotiations, and he had been ‘asking for things that no other American President would ask for!’ One image of Trump shows him with French President Macron and Canadian Prime Minister Trudeau, despite the pair publicly slamming each other over trade recently 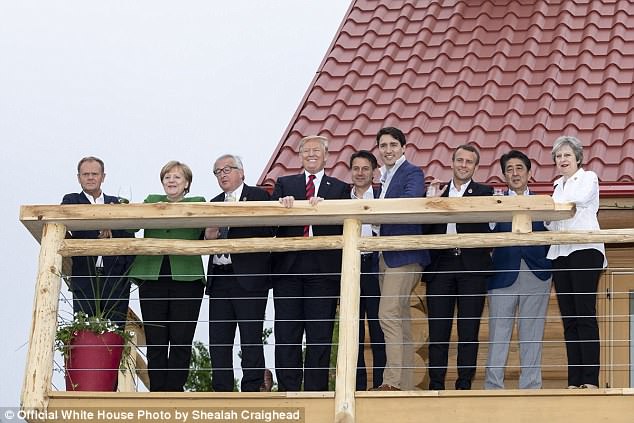 Trump is pictured in the center of a group photo taken on a balcony during the G7 Summit, and appears to be all smiles

The story appears to change in another photo though, where Trump is seen speaking with Merkel, Trudeau and Japanese Prime Minister Shinzo Abe on the balcony.

His audience appears less than impressed, and the smiles have disappeared from the faces of all three leaders.

Trump showed he had a captive audience in Prime Minister Theresa May, as one photo showed her grinning while the US leader spoke to her with his hand on her shoulder.

The President quickly followed up with a third Twitter post, where he told followers he had: ‘Great discussions with European Union Commission President Jean-Claude Juncker and EU Council President Donald Tusk at the G7 in Canada last week’.

The pictures paint a different picture of the summit than what had earlier been shared.

One iconic image, labelled a ‘renaissance painting’ by many on social media, showed Trump sitting with his arms crossed and looking up at the other leaders who stood around him looking frustrated. 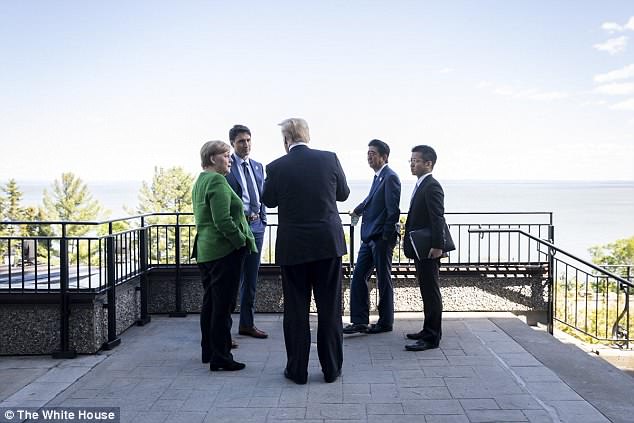 His reception appears more frosty during one discussion, which appeared to take place on a different balcony Trump also shared a picture of himself and Theresa May, who was seen smiling as the US President held her shoulder

Trump was also slammed after the summit by May, who expressed sadness at his ‘disappointing’ behaviour after he dramatically disowned the communique from the gathering in Canada.

‘At this summit we expressed deep disappointment sat the unjustified decision of the United States to apply tariffs to steel and aluminium imports,’ she said.

‘As longstanding allies we do not make progress by ignoring each other’s concerns but by addressing them together.’

Mrs May was among a group of leaders, spearheaded by German Chancellor Angela Merkel, who berated the US president over his imposition of punitive steel tariffs.

At the summit, the countries – the US, UK, France, Germany, Japan, Canada and Italy – eventually hammered out a statement committing to ‘free, fair, and mutually beneficial trade’ and tackling protectionism.

But within minutes of the summit ending, Mr Trump, who had left early for his summit in Singapore with North Korea, dramatically condemned the communique and launched a furious attack on Mr Trudeau via Twitter. 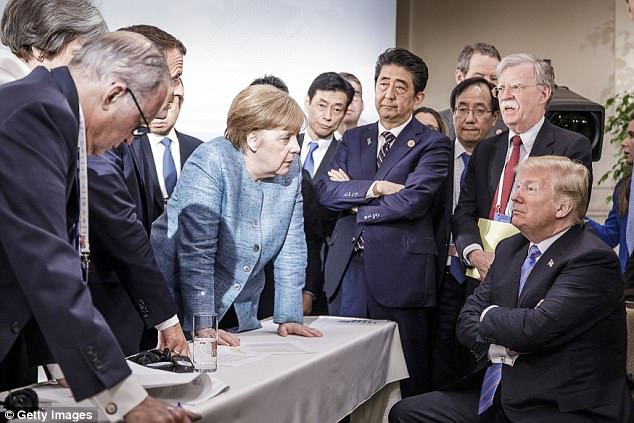 He fired off furious tweets saying he told US representatives ‘not to endorse the Communique’ and accusing Canadian Prime Minister Justin Trudeau – who hosted the summit – of being ‘dishonest and weak’.

The President’s decision to slap huge 25 per cent duty on imports of steel and 10 per cent on aluminium from countries including the UK and the rest of the EU has raised the prospect of a trade war and increased tensions between the allied countries.

May was not alone in her anger – French president Emmanuel Macron expressed his fury at Trump’s decision to renege on the agreement, suggesting the US leader’s change of heart was a ‘fit of anger’.

‘International cooperation cannot be dictated by fits of anger and throwaway remarks,’ he said in a statement issued from his office.

‘We spend two days working out a (joint) statement and commitments. We are sticking to them and whoever reneges on them is showing incoherence and inconsistency.’

He accused Mr Trump of chipping away at his relationship with Western allies by unilaterally pulling out of the Iran nuclear deal.

‘It’s actually not a real surprise [that Trump pulled out of the G7 agreement], we have seen this with the climate agreement or the Iran deal,’ Mr Maas said.

‘In a matter of seconds, you can destroy trust with 280 Twitter characters.’

He warned that it would take much longer to rebuild the lost trust.