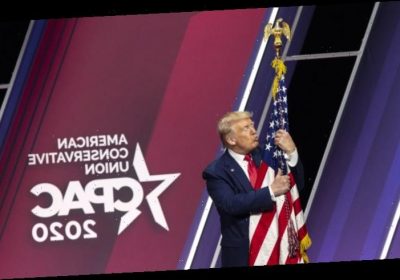 Orlando, Florida: For aspiring Republican presidential candidates, the Conservative Political Action Conference (CPAC) has long been one of the most important stops on their campaign itinerary.

The event, held early each year near Washington DC, gives ambitious politicians a platform to spruik their conservative bona fides before a crowd of dedicated activists from across the country. Each year, conference attendees vote for their preferred presidential candidate in a “straw poll” that is seen as an important barometer of grassroots conservative opinion. 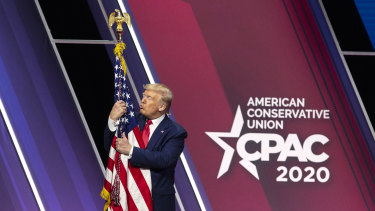 This year the event is being held for the first time in balmy Orlando, Florida – home to major theme parks such as Disney World, Legoland and SeaWorld.

Mass gatherings are banned in the Washington area because of coronavirus restrictions, but not in Florida, where Republican Governor Ron DeSantis has prioritised keeping the state’s tourism-dependent economy as open as possible. He was delighted to host the event, which begins on Saturday (AEDT).

Florida also happens to be the home state of former president and possible 2024 candidate Donald Trump, who will deliver his first speech since leaving the White House at CPAC on Monday (AEDT). Orlando is a breezy half-hour plane ride from Trump’s Mar-a-Lago estate, where he and wife Melania now live.

In his speech, Trump is expected to attack Joe Biden’s early policy moves and seek to cement his status as the party’s figurehead.

The fact CPAC has moved onto Trump’s turf this year is a powerful metaphor for the ex-president’s ongoing dominance in the Republican Party base.

It wasn’t always such a smooth relationship.

Trump’s first CPAC speech in 2011, when he was publicly considering a run for president, is now regarded as his official “coming out” as a conservative. He polarised the CPAC crowd as he later would the entire nation: while the conference-goers applauded his attacks on Barack Obama, many booed when Trump said that Ron Paul, a libertarian favourite, was unelectable.

In 2016 Trump, by now a leading contender for the Republican nomination, pulled out of the event at the last minute. CPAC organisers said it was because they insisted he take questions from the crowd and hit out at him on Twitter, saying his absence “sends a clear message to conservatives”. Trump finished third in that year’s CPAC straw poll behind Ted Cruz and Marco Rubio, reflecting his early struggles to appeal to ideological conservatives.

A year later, Trump graced the CPAC stage as a triumphant new president. Adviser Kellyanne Conway joked that the event should be renamed TPAC: the Trump Political Action Conference.

That label would be even more accurate this year. Despite the fact Trump lost his re-election bid and was impeached twice, he is expected to crush the competition in this year’s straw poll.

The event’s theme – “America Uncancelled” – reflects Trump’s grievance-fuelled style of politics. So does the speaker list, which is packed with Trump devotees, and the distinctly Trumpian set of discussion topics.

Since its founding in 1974, CPAC has played an important role in determining the parameters of acceptable conservative debate – for example, by excluding the ultra-conservative John Birch Society. This year, criticism of Trump appears to be out of bounds.

Mitch McConnell, the most senior Republican in Congress, was not invited to the conference after declaring Trump responsible for the January 6 assault on the Capitol. Republican congresswoman Liz Cheney, who voted to impeach Trump, is not attending. Neither is Republican Senator Mitt Romney, who was uninvited last year after voting to convict Trump in his first impeachment trial. (Romney won the CPAC straw poll four times between 2007 and 2012, reflecting how much the Republican base has transformed in the years since.)

Meanwhile, Republican Senators Josh Hawley and Ted Cruz have been granted star speaking slots. Both Cruz and Hawley challenged the certification of the presidential election results on the day of the Capitol attack. Many other CPAC speakers were prominent supporters of Trump’s “stop the steal” crusade.

Seven panel sessions at CPAC are devoted to the topic of “protecting elections”, with titles such as “The Left pulled the strings, covered it up, and even admits it”. Other Trump priorities – such as social media censorship, trade with China and illegal immigration- dominate the program.

Angela Stanton-King – a supporter of the far-right QAnon conspiracy theory – will speak on a panel. So will former New York City police commissioner Brian Kerik, who spent three years in jail for tax fraud and making false statements to federal authorities. Both were pardoned by Trump.

Online commentator Young Pharaoh was originally scheduled to speak but was uninvited this week after it was revealed he had made several anti-semitic remarks, including calling Judaism a “complete lie” that was “made up for political gain”.

It turns out that opposition to “cancel culture” has its limits – even at CPAC.

What in the World

A note direct from our foreign correspondents about what’s making headlines around the world. Sign up for our weekly newsletter here.